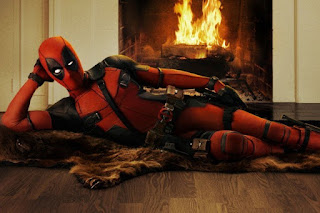 There are times when your anticipation of something really lets you down. A big build up to an even bigger let down. Like any Fantastic 4 movie, or the feature length version of The Hitchhikers Guide to the Galaxy, or the recent Pride and Prejudice and Zombies. There are also those times when you're really torn between the love of the source material and the deep flaws that make you unable to forgive what you're seeing. Like World War Z or that third X-Men movie we don't talk about anymore. Then there are those oh so rare times when your belief in something finally pays off. Your excitement and patience are rewarded with something that fully lives up to the hype that's been built up around it. The first X-Men movie, The Fellowship of the Ring, and now Deadpool. 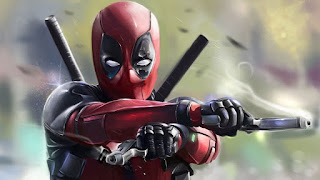 Deadpool isn't someone a lot of us grew up with (unless you're a whole lot younger than me. If you are get off my lawn), but I've been a fan since probably the  late-90's. That was long before mobs of Deadpool cosplayers or anyone else really ever thought that Deadpool could have his own movie. It was back before people thought that movies based on comic books would ever be the huge thing it's become. Despite the fact that every comic property ever is now being developed in to a TV show or movie I'm still genuinely surprised this movie got made. There are so many things wrong about Deadpool as a "leading man". He's not really a hero, there's way more violence than we're used to seeing in the MCU, and it's much dirtier and raunchier than I ever expected to see in a Marvel movie. I am aware that being Fox, this isn't quite the same universe as many of the other Marvel movies, but since they all stem from the same place I'm sort of lumping them together even if it's not technically correct. Deal with it. If nothing else this movie should get props just for seeing the light of day. Who knew that Deadpool fans or Ryan Reynolds had that much pull in Hollywood? I sure didn't. It's not like Reynolds has done a hell of a lot with the superheroes he's played in the past. I realize that bad writing, directing, or producing aren't his fault. I also know that there wasn't a gun to his head when he accepted parts in Green Lantern or R.I.P.D. either. The only time the jokes in Deadpool wear a little thin are when he repeatedly goes after the Wolverine origins movie or Green Lantern. Admittedly his brief stint at the beginning of Wolverine: Origins was one of the best parts of that movie (or the only good part), but he spends a lot of time gnawing on the hands that fed him. And while the reasons his other superhero attempts failed may not land at his doorstep it's not like he did much to make them any better either. After awhile it just becomes "Okay, I get it. Green Lantern sucked. Let's please move on." That's a fairly minor thing for me to nit-pick considering all of the things this movie did right. Yes, there are lots of jokes made at the expense of other superheros. There are just lots of jokes in general, but with how dark and serious the MCU can be lately this seems like a real breath of fresh air. It's funnier than Guardians of the Galaxy, and way lighter than the Avengers movies. Now that Captain America 3 is looking more like it's going to be a "don't make me choose between Tony and Bucky" story than it is any recognizable Civil War I think it's exactly the boot to the ass that Marvel movies need. 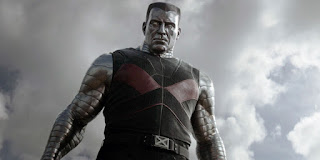 From the opening credits that list the actors by descriptions (moody teen, CGI character, and gratuitous cameo) you know this isn't a normal Marvel movie. And as funny as the trailers are they just don't do it justice. Even the red band trailers. One quick side note: the theater we were in opening night contained at least one very small child (I only heard one crying, but there were likely more). DO NOT take a small child to this movie. Since I don't have kids I usually refrain from giving any opinion about parenting, but you are a bad person as well as a bad parent if you take your kids to see this. There are grown ass adults who will find the blood and gore excessive (I'm not one of them, but those people are probably out there). You've been warned. 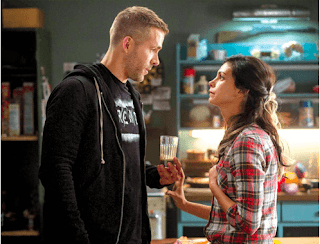 This is a Deadpool origin story, and as such the stakes are pretty low. If you know Deadpool you'll know that he's not the kind of guy who's going to be out there saving the world. He's kind of a selfish dick who has no interest in being a hero. That's why we like him I suppose. I did appreciate that they got that bridge scene that has been used in all the trailers out of the way early. It's been featured so much in ads that I assumed it was their major end of the movie fight scene. It's not. Instead it sets up a very extended flashback that shows us where Deadpool came from. He and his girlfriend Vanessa are both a bit too "hooker with a heart of gold" even though she really was a hooker (and has totally already played a hooker before. I'm sorry, "companion"), but it works in the context they use it in. Guy meets girl, guy gets cancer, guy gets turned into a mutant, girl gets kidnapped, guy saves girl. That's an oversimplification to be sure, but that's the gist. Nothing too out of the box for the plot of a superhero movie. It's the way in which all of this is delivered that makes it so much fun. 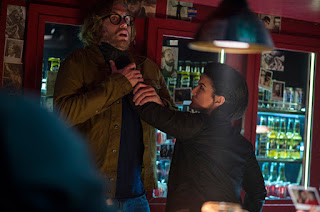 Deadpool knows he's in a movie, knows about the other movies, and talks the audience through pretty much the entire thing. Heavy handed as the jokes may seem sometimes they never fall flat or feel stale. I don't want to spend all of our time here quoting funny lines because that would take forever since there were so many of them. The "quotes" section of the IMDB page is full to bursting. Ryan Reynolds gets to make full use of his great comedic timing. I can definitely see why he was being considered to star in a Fletch reboot at one time. He and T.J. Miller play off of each other so well that even if they don't makes a sequel I hope they do a comedy together again. Buddy cop film, a remake of Dying Young, anything really.

It was nice the way they worked a few X-Men in to try and reign in Deadpool's more homicidal tendencies, but the Colossus accent was way over the top. Like bordering on Yakov Smirnoff over the top. It's nice that he's Russian again, but he's just a bit too Russian. I really liked Negasonic Teenage Warhead and hope they use her again in something. I'm not sure how all of this fits in to the weird new X-Men timeline (neither is Deadpool for that matter) since the upcoming Apocalypse takes place in the 80's. Are we just going to move up a decade every few years? At that rate Deadpool won't be in the same place as the other mutants for several movies still. Although the X-Men movies have become as wibbly-wobbly timey-wimey as Doctor Who so they can pretty much do whatever they want. They could have made better use of his roommate Blind Al, and I still wanted to see Cable, but there's always the sequel. Given that I tried to see this again on Saturday, and it was sold out I assume there will be a sequel. 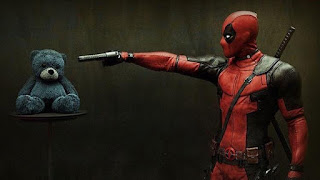 So if you hate graphic violence, excessive expletives, and dirty fun you won't like Deadpool. If you like all of those things (and maybe aren't averse to seeing Ryan Reynolds' bare ass) you'll at least like, if not love, Deadpool. If you're indifferent to all of those things, or maybe just on the fence, go see it anyway. It'll help boost the box office, and convince Fox that there's a place in this world for movies like this. And it'll get me one step closer to seeing Deadpool and Cable team up.


Beth got her start writing for a site called Movie Criticism for the Retarded (which has been revived as dorkdroppings.com. Check it out sometime), but was pulled out of an early retirement to write for Needless Things. When she isn't writing she plays video games and watches bad horror movies while eagerly awaiting the zombie apocalypse. She may try to save her husband and/or their cats, but luckily hasn't had to make those tough decisions yet.
Posted by bethv at 11:00:00 AM