Devlin's Domain - Why Dont You Play In Hell?

I have managed to find yet another great Japanese film to cover in Devlin's Domain. They really produce some great, quality entertainment. This one isn't a horror flick but there is plenty of blood. I mean gallons of blood, and it's oh so pretty. Are you ready to see what wonderful things come from over the seas?

Most of us have had dreams and aspirations that may or may not have become a reality. Anyone who has attempted to pursue their dreams knows it takes a lot of hard work and dedication and even then may not work out in the long run. For those in pursuit of success in the entertainment industry there are few opportunities and a lot of competition. Not everyone will reach the heights of success either for lack of talent, lack of connections or just never being in the right place at the right time. But if an opportunity arises and one is completely committed regardless of potential sacrifices, one must seize the opportunity and never look back. This is the theme of this week's movie.

This film is truly a film for film lovers. It's in the same vein as Cecil B. Demented while being completely different. It's about giving blood, sweat, and tears for the sake of your art and getting nothing in return. True passion requires no financial compensation, but that does help with survival. Anybody that has attempted to get into music, acting, writing, painting, fighting, or pro wrestling has had the unfortunate experience of traveling and working for little or no money. It's something that can lower morale but those with true passion will continue on no matter what the eventual outcome. This movie is about a small crew of filmmakers with said passion and who are willing to give up everything for their dreams.

Why Don't You Play In Hell? 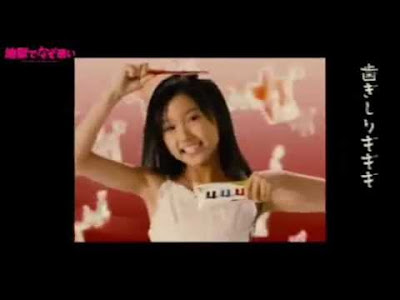 This film is completely wacky and all over the place. It opens up with a young girl performing a rather creepy song about brushing your teeth for a toothpaste commercial. It doesn't seem all that important initially, but the song will be repeated several times throughout the movie. The girl is named Mitsuko and is one of the main characters in the film. She is the daughter of a film producer/Japanese gang leader, Muto, who is caught having an affair by his wife. The wife goes bonkers and murders the woman who was sleeping with her husband along with a few other people. Mitsuko bears witness to the aftermath of this bloodbath and seems unaffected as she dances in the pool of blood and sings for one of the wounded men. The man, who is head of a rival gang, has some weird, fantastical hallucinations of the girl and becomes obsessed.

Another set of characters the film follows is a group of young guerilla filmmakers who call themselves the Fuck Bombers. A very Japanese name that might mean something completely different than it sounds. The leader of the group, Director Hirata, is passionate to the point of psychosis. He finds real conflicts and invades with his film crew encouraging people to fight for the camera. He talks one of the better fighters, Sasaki, into joining his group and promises he'll be the next Bruce Lee. While filming in the streets they run across the wounded gang leader that survived Mitsuko's mother's attack and are allowed to film him.

The film makes a time jump of a few years and we see Mitsuko has now become an adult actress. She runs away from her father's movie set and goes into hiding with a timid bystander who she convinces to pose as her boyfriend. He's head over heels for Mitsuko and is on the verge of orgasm the entire time he's around her. Eventually Muto's men catch up to them and Muto threatens to kill Mitsuko's newly found friend. She lies and says he's a director and that spares his life, but he must deliver an excellent movie in return. Of course he has no clue what he's doing, but he knows someone that does. 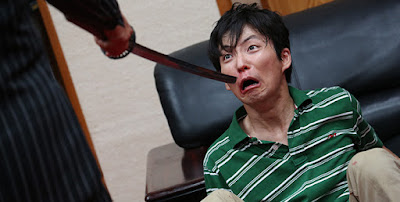 Director Hirata and the Fuck Bombers are still attempting to make it in the movie business even though they've mad no progress whatsoever. They're always filming but there's little rhyme or reason to what they're doing. Hirata's main action star, Sasaki, has given up hope and quit. Sasaki's departure drops the morale of the Fuck Bombers a bit until Mitsuko and her friend show up to ask for help making a movie and reveal their budget. Hirata loses his mind and is overjoyed with this opportunity. He convinces Sasaki to return to the pack and they head out to make their masterpiece. 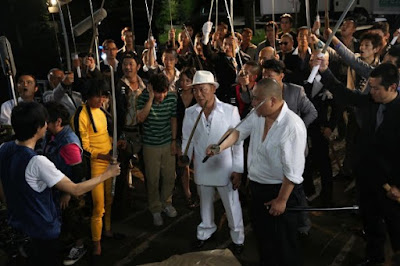 Director Hirata takes the reigns immediately and gets the gang members riled up and ready for action. Muto reveals that he wants to fight his rival's gang in the final scene of his movie. He suggests an ambush that's filmed, but Hirata manages to convince the rival gang to cooperate with the filming. Miraculously two bitter enemies have agreed to collaborate on a scene where they will legitimately be killing each other. 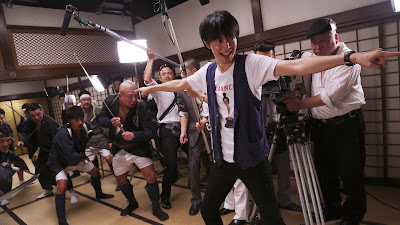 The finale is utter insanity with blood and body parts flying everywhere. Both gangs go at each other fearlessly while still complying with the director's commands. It's a totally ridiculous scenario, but it's a comedic action thriller so it's ok. I couldn't help but feel good for Hirata. He looked so happy and enthusiastic about finally being able to film the movie he'd always dreamed about. Although based on the angles and perspectives the Fuck Bombers were shooting from, it's hard to imagine a cut of his film that isn't completely incoherent. 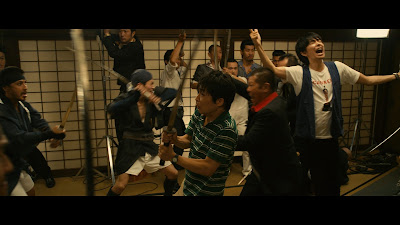 Overall I must say I had a blast sitting through this one. It's funny, it's gory as hell, and it's batshit crazy. There's never a dull moment because the pacing and the jumps between characters keeps things rolling. I've seen two other films by this director, Suicide Club and Strange Circus, but this is by far my favorite. IMDB rates it a 7.2 but I'll go ahead and round it up to an 8. You won't regret watching this one, go ahead.

What sort of extreme, sadistic violence will I be covering next? Come back and visit Devlin's Domain to find out what cinematic atrocities await.


About Me: I have a couple of different aliases, but for this column I will use my middle name. I am Devlin and I currently reside in Atlanta, GA. 32 years of age and still feeling immortal. Former Rockstar, current Pro Wrestler and hell, I'm still a Rockstar at heart. I got my first taste of obscure cinema when I was about 8 years old. My Dad would take us to the video store every weekend to stock up on classic horror films to watch on his projector. They were mostly harmless, PG-rated horror films like the great Universal monster movies. Then one night he rented a movie for himself to watch after we had gone to bed. I was so intrigued by this film that I wasn't allowed to see. I begged and begged and he eventually caved. That night I was exposed to a film unlike anything I had seen before. Ever since that night I wanted to find more films that gave me that same sensation. I wanted to feel shock and disgust. I found my place in the Horror aisle. The film I watched was Faces of Death. Thanks Dad.www.facebook.com/DevlinValek