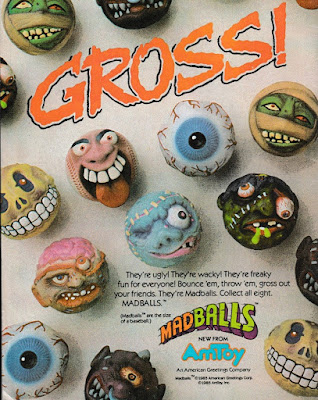 Okay, technically she probably doesn’t currently hate Madballs and might need a reminder as to what they even are, but back in 1985 she hated them. I know this because owning a Madball was the most important thing in my life.

In case you don’t know, Madballs are a collection of foam, Nerf-like balls produced by AmToy in the mid-80s. But these (as you might have guessed) are no ordinary balls. Each one had a monstrous sculpt that represented some kind of creature or other grotesque persona. They were a part of the HUGE 80s trend of gross-out products aimed at kids because kids love gross stuff. The era gave us Madballs, Garbage Pail Kids, Boglins, and the incorporation of slime or ooze into every toy line available, no matter how appropriate.

Like most kids back then, my mom was the gateway to toys. I was nine years old, so it’s not like I had a job and could just drive to Lionel Playworld or Richway and buy whatever I wanted. Mom had oversight on every toy purchase that was made and it was always a struggle to purchase any toys that had even a hint of ooze, fang, deformity, pus, goo, boogers, slime, or exposed internal organs. I don’t specifically remember how the arguments went, but I must have been exactly the right combination of well-behaved and annoying to eventually break down her resistance (I actually was a really good kid – she’d even agree).

My sister and I both got Boglins at some point, I had tons of Garbage Pail Kids (although I’m pretty sure the deal was that I had to use my own money for those), and I even had a pretty solid collection of M.U.S.C.L.E. figures. Yeah, I know those aren’t really gross (mostly), but my mom put them in that category.

Madballs were tough, though. I think that they were the most visceral and truly repellent of the 80s gross-out toys. They covered every kind of disgustingness, from bile to snot to brains to rotten and decayed teeth.

Of course, Mom didn’t see them that way (which possibly enhanced my perception of their glory). I don’t know if my first exposure to Madballs was in a store on via the all-important TV commercial:

I remember this redneck kid named Shane in my class at the time would walk around singing “We play with… our balls” to the tune of that jingle, and then looking around expecting everyone to laugh like he’d just told the best version of The Aristocrats ever. We did because he was huge and scary and had stubble already. I just realized that Shane was the same kid that would later go on to call me “Batfaggot”, so Shane – if you’re reading this, I hope prison is great and that you’ve finally made your way through The Cat in the Hat on your own.

Back in the day commercials were far more important than they are now. For the last two decades we’ve had combinations of toy magazines and the internet to alert us to new toys coming out, usually long before we should even know about them. In 1985 it was either television commercials during cartoons or the Sears Wishbook. I miss the days of randomly finding some cool, new toy that I had no idea existed just hanging on the pegs. 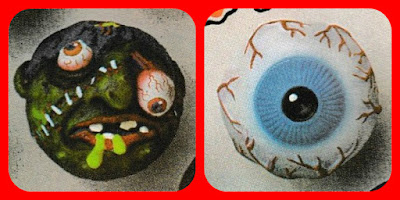 Whatever the case, I recall many occasions in the store when I would beg my mom for a Madball. Slobulus and Oculus Orbus were the two I wanted the most. I feel like Oculus was the best of the Madballs because despite not even having a face, he managed to stand out as an exceptional toy. He didn’t need crazy teeth or horns or a wacky face to get over – he had style. He was a giant freaking eyeball and that was enough.

Mom wasn’t having it. From Richway to Zayre to Eckerd and everywhere else, I would ask for those Madballs and she would decline. I have to think it was the surprisingly excellent distribution the line got (being part of the American Greetings company probably helped) that eventually wore her down. No matter where we went, there were Madballs. 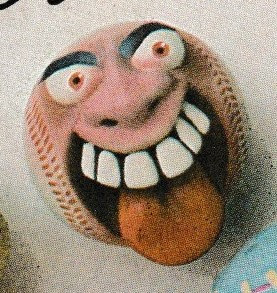 The first one I got was Screamin’ Meemie, who was a baseball. If you know me, you know that a baseball was not the Madball I wanted. But Meemie was the least gross of the lot and was a Madball, so I enthusiastically grabbed him off the peg and put him in the cart when my mom finally gave in and said I could have that one. I was not thrilled with Meemie, but even at that young age some primal part of me understood that this fairly unexciting baseball was but the first step towards that giant eyeball and numerous decapitated heads in varying stages of decay and disrepair.

I didn’t hate Screamin’ Meemie. Like I said – he was a Madball. And his giant tongue and bulging eyes were pretty awesome. Truth be told, if he hadn’t had the baseball threading on him I probably would have liked him just fine. But like I said – I knew I had my foot in the Madball door. Because as any good storyteller knows, Meemie needed a foil.

For the most part the Madballs are chaotic neutral and don’t fight amongst themselves. More on that later. But my mom didn’t know that. I took advantage of her ignorance to convince her that I needed another Madball. Preferably the clearly evil Slobulus or the sinister Oculus Orbus, though quite frankly any of the characters could be perceived as nefarious. I didn’t end up with either of those. Instead, I was allowed to get Dust Brain because he was the least vile and gooey of the bunch. 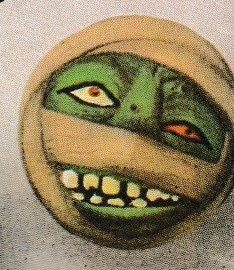 I ended up liking Dust Brain more than I thought I would. I had seen some mummy movies by then, so he certainly had some brand recognition. Meemie and Dusty didn’t make a particularly good pair, but I was happy to have any Madballs. I’m pretty sure I fought harder and longer to get those toys than any others in my youth.

I would finally get an Oculus Orbus from a friend for my birthday and I received a castoff Slobulus that looked like he had a bite taken out of him. I graciously accepted it, but even then I was a stickler for toy integrity and he went straight into the trash when I got home.

There were also many brands of knockoff and imitator Madballs. These made me angry for being rip-offs, for not being as good as actual Madballs, and for being much easier to find. While Madballs were everywhere at first, by the time I had broken my mom down they were starting to get scarce. But the knockoffs where everywhere. Those stupid hollow rubber ones that must have arrived at the store with mashed bubbles lingered at Toys R Us into the 90s. For me, nothing but true Madballs would do.

I kept those three Madballs – Oculus, Meemie, and Dust Brain – safe for years. They were part of the small collection of toys I brought with me when I moved out of my parents’ home because they retained their cool. That’s the magic of Madballs and other gross-out toys – they never stop being fun. While I firmly believe that every toy is a work of art to some extent, the gross-out era gave us some of the most creative and challenging toys of all time. Each Madball was a sculpture that had challenged the creator to bring something new into a very specific and contained format. They could do whatever they wanted, but it had to be in the form of a four-and-a-half inch wide ball (or larger with later special releases).

Madballs are one of the most beautiful and visually impactful toys from my childhood. They were revived a few years ago by Art Asylum, who released two new series of Madballs through Basic Fun. Art Asylum – some of the most respected creators in the modern toy industry – sculpted new versions of the classic Balls, as well as creating new characters. These were extremely tough to find in my neck of the woods. At the time I was still buying most of my stuff at retail and avoided ordering online (and paying outrageous shipping fees) as much as I could.

I recall hitting Toys R Us almost daily and scouring the whole damn store because I wasn’t sure where Madballs would be displayed. Would they be with the McFarlane toys and other “collector” stuff? Sporting goods? Maybe on an endcap in the front? I had no idea. I remember that Madball hunt as being more frustrating than almost any other toy hunt.

After what seemed like months of searching (I have no idea), I finally hit the motherlode in a somewhat unlikely place – Spencer Gifts. My wife spotted a single Madball hanging on the pegs of impulse items in front of the cash registers. Upon closer inspection, we saw there was a whole basket full of crap with several more Madballs under those pegs. I was nine years old again. I took a quick, greedy look around to make sure nobody was going to run up and take my precious prizes and started digging through the basket.

They had releases from both the first and second series, but they were crazy overpriced – I think $9.99 apiece. As often happens, my wife told me I had better go ahead and get them because she knows how irrational I get about toys and feeling like I’ve missed out on them. Especially with these Madballs because we had been together a few years by then and she knew they were a special case. So I picked these out: 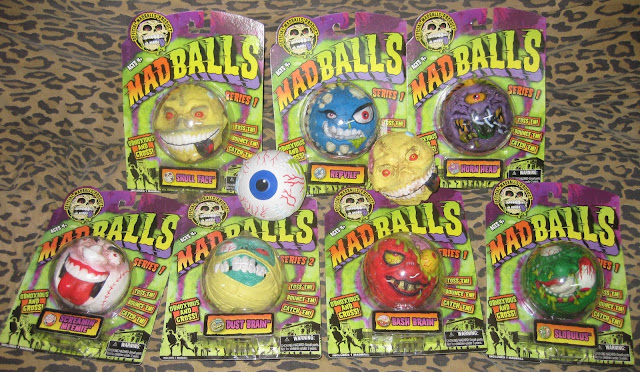 And of course later wished like hell that I had bought the rest. I just wasn’t crazy about the ones I didn’t buy, but I should’ve known I’d end up wanting them anyway. Still, I am the proud owner of these fantastic Madballs, a special statement because I know a lot of people who never did find these and still want to add them to their collection. 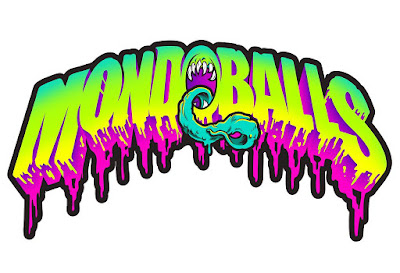 Now it’s 2016 and someone else is reviving these morbid orbs. Mondo Tees, who have recently gotten into the business of producing badass, pricey toys, has announced a line called Mondoballs, which will not only include our treasured Madballs, but also spherical interpretations of licensed characters like Venom: 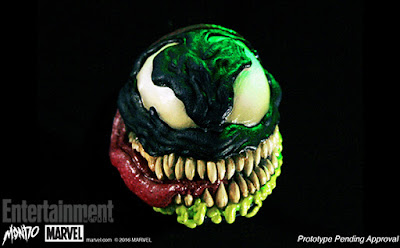 I will absolutely be buying every single Madball they release, and deepening upon the pricing (they have already claimed “affordable”) I might pick up the licensed versions, as well. That Venom looks great! 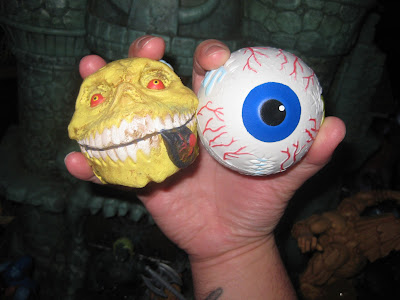 Madballs represent a formative time not only in my life, but in the history of toys. Many companies had the good fortune to find commercial and creative success in the “anything goes” days of the 80s. The toy market was a different place and the manufacturers were more willing to take a chance on untested properties – oftentimes the wackier, the better. As a result of that wild and experimental time we got some of the most inspired and wonderful toys to ever hit the market.
Posted by Phantom Troublemaker at 11:00:00 AM