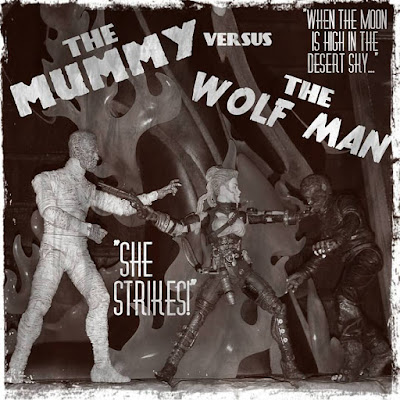 Toys are in a strange but interesting place right now. I find myself in an odd position that I’m going to try to articulate today.

As noted last week, I am done with the Masters of the Universe Classics toy line. I let my credit card info lapse and passed on the final four figures, as well as this year’s Collector’s Choice line. I have received four e-mails from Mattycollector so far regarding this and have laughed gleefully at each of them, relishing my newfound freedom.


I might pick up the Filmation Trap-Jaw since he’s my favorite character. As excited as I was for Snake Mountain, I don’t have the space or the money for that thing. Sure – I’d love to own it. But it simply isn’t practical.

I’m trying my best to quit Marvel Legends. Most of the figures aren’t twenty dollar figures. This struck me particularly hard the other day when I was comparing lines and realized that the excellent Star Wars Black Series and equally beautiful but slightly less sturdy Funko Legacy figures cost the same. Heck, even the new 6” DC Multiverse Batman v Superman releases look nicer than most Marvel Legends. And they certainly have more original tooling.

Granted, I understand that movie lines get more cash to develop than comic book lines. And the Marvel Legends figures based on movies do tend to have unique sculpts (mostly). But as a whole I’m not super happy with Hasbro’s 6” Marvel line and if I had the willpower to pass up neat-o characters like Jack O’ Lantern I’d quit completely. I do cherry pick, but a clean break would be great.

The world of retail toys has changed quite a bit. The change that has affected me the most is Hasbro’s switch from super-articulated 3.75” figures to simpler versions with five points of articulation. I have been collecting 3.75” Star Wars basically my entire life. I have evolved along with the line, and as aesthetics have changed I have left behind the old style and embraced the new. All of the Kenner toys that I had when I was a kid are long gone, as GI Joe became my toy of choice and Star Wars was relegated to storage or – unbeknownst to me – yard sales. When the 1995 relaunch happened I started up again and have basically been collecting ever since. When they switched from the early musclebound figures to a more realistic style, I got rid of the older versions. When they started adding articulation, improving sculpts, and fine-tuning paint apps I would buy the latest and best figures and vehicles and dispose of the obsolete versions.

All of this was done because over the years the toys were getting better and more sophisticated. Figures sported more joints and accessories and (mostly) better likenesses. Vehicles were getting bigger and more complex and featured incredible electronic effects. The 2007 Millennium Falcon and later AT-AT are the most amazing toys I have ever owned in my life.

But two years ago Hasbro tried something new. Or old, I suppose. They launched a new line of 3.75” figures with only five points of articulation. The first time I saw them, I knew that it was the death knell of the line I collect. They looked great. They had complimentary accessories. In some cases, they actually looked better than some of the better-articulated figures. But the key point was that they were a lot cheaper. At the time the figures I collected were creeping up over ten dollars apiece. These new, simpler figures were six apiece, with two-packs going for ten bucks. 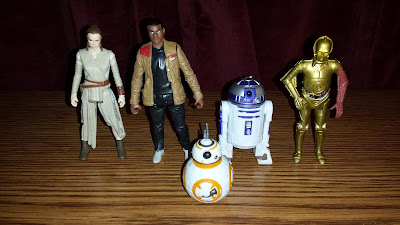 The new figures don’t really blend in with mine. Droids and some aliens look okay, but you can’t put these hero characters next to mine. Hasbro made the poor decision to continue the more articulated figure line as a Walmart Exclusive line, pricing them at $12.96 each.
The point of all that is that while I am not done with Star Wars, my collecting has been significantly reduced.

I mean, aside from buying stuff for my son.

Pricing is bonkers at retail right now. Hasbro upped their Star Wars figures, bumping the single-carded Force Awakens figures from the $5.99 of the prior line to $7.99 or even an absurd $14.99 for their ridiculous “Armor Up” figures, which include a basic figure and a M.A.S.K.-like helmet accessory. These are one of the worst values in toys I’ve ever seen. The vehicles are similarly insane, with the new X-Wings going for fifty bucks. These are simple, basic toys with no electronics and cockpits that are too small for the included figures.

On the other side you have Mattel with an entire line of reasonably-priced Batman v Superman: Dawn of Justice toys. The six-inch collector figures are the standard twenty bucks, but the similarly-scaled basic figures (that actually look better and/or more fun in some cases) are only ten bucks. The large scale electronic figures are also a relative deal and the new BvS Batmobile toy is only $24.99! It’s not the most complex vehicle ever, but it’s scaled for six inch figures and looks great.

To me, it seems that Mattel is aggressively trying to return to the superhero action figure market. I’ll be very curious to see what they bring to this year’s Toy Fair in February. Honestly, there’s no excuse for their poor performance over the past several years. They have the license to the biggest superheroes in history. Marvel may be on fire, but they have exactly one truly big gun – Spider-Man. And he doesn’t come close to the global selling power of Batman and Superman.

NECA is still plugging along. I haven’t bought a ton from them lately and even sold off my Pacific Rim collection, but I know that as long as they’re making figures I’ll buy something from time to time. And they factor into my Marvel Legends resentment, as well. Most of their figures retail for twenty bucks or less and standing a Marvel Legends offering side by side with one of NECA’s releases is laughable. They don’t even look like the same species.

Speaking of NECA, I love their 8" retro figures. I keep trying to avoid Mego-style figures, but when they look as awesome as these and the Batman '66 figures from Figures Toy Company:

It's hard to pass them up.

Funko kind of lost me. I have all of their Game of Thrones Legacy figures and aside from some QC issues they’re awesome, but their release schedule is so slow that it’s hard to stay excited about them. Game of Thrones has a stupid big cast and I have some favorite characters that they’re just never going to get to at this rate (if the line is even still active – I suppose we’ll find out in a few weeks). I also picked up all five of the initial Firefly figures, but waiting on that line would prove even more frustrating, so I moved those on eBay. The only reason I haven’t sold the Game of Thrones figures is that it would be next to impossible to ship them without them ending up damaged.

Obviously there’s a lot more I could cover at retail, but I’m trying to focus on toy lines I am directly interested in. Which brings me to the direct market, collector-oriented lines being produced by DC Collectibles, Diamond Select Toys, and to a lesser extent, Mezco.

Over the last year DC Collectibles has produced the largest number of toys that I’ve absolutely adored. Their Arkham video game and Batman Animated lines are fantastic, and their new Icons line could be a game changer.

DCC’s Arkham line has evolved in a surprisingly similar manner to Hasbro’s Star Wars line. Not satisfied with beautiful sculpts and paint, the company has skillfully added articulation and features over the years that have turned what was once a simple licensed line into a source of innovation and “must-have” toys. There have been some quality issues along the way, but for the most part I have been very impressed with this line and continue to eagerly anticipate future releases. 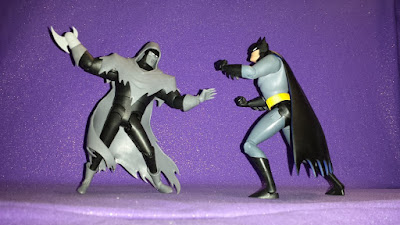 The Batman Animated line is producing figures of my favorite interpretation of one of my favorite franchises of all time. As I’ve mentioned over and over again, I hate the ugly hip articulation. But otherwise these figures are breathtaking. There have been a few minor QC issues – broken or fragile parts, unpainted areas – but the line has been mostly wonderful and shows every sign of expanding to encompass the entire DC Animated Universe. I can’t wait.

The Icons line is brand new, but the two figures I own – Batman and Deadman – are excellent. This looks to be an all-encompassing line along the lines of Mattel’s DC Universe Classics, but much higher quality. I can’t do more than cherry pick characters I like here and there, but I’m excited to follow the line as it expands.

DCC’s major challenge with these lines is going to be price. Now that I am done with Masters of the Universe Classics, I am not paying thirty bucks for six inch figures. While the Animated and Arkham figures are hovering around $20-$25, a few recent Icons have been solicited at significantly higher prices. Static is being offered for $45. He is packed with accessories, but he’s still just a single-carded six inch action figure.

The problem, of course, is that if Hasbro’s Marvel Legends are $20, it only stands to reason that these other, far superior figures should command a much higher price. 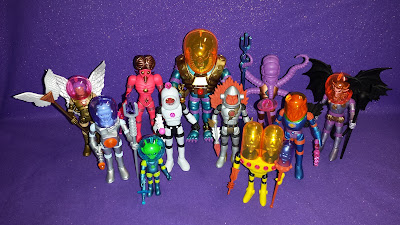 Speaking of far superior figures, I'll be talking to Gary Schaeffer, one of the men behind the modern Outer Space Men line, next Friday on the Needless Things Podcast. I adore these toys and am excited to see what they have in store now that the license is back in the hands of Mel Birnkrant (the original creator) and Gary.

Diamond Select Toys are offering some of the best figures on the market today. They have some awesome licenses - Universal Monsters, Marvel, Ghostbusters, Nightmare Before Christmas, Star Trek, some DC Comics TV (which is odd), and tons more. I love their figures, but they are all a larger scale than I want them to be. That doesn't stop me from buying the ones I want, though. 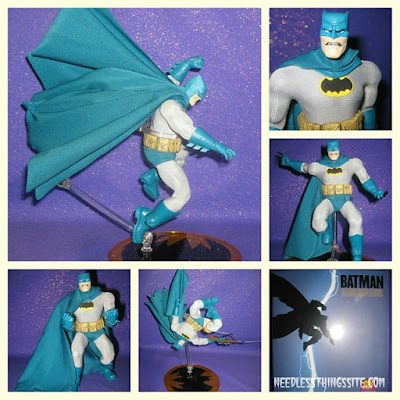 I’ll close this thing with the highest priced twelfth scale figures of all – Mezco’s One:12 Collective figures.

These things go for around sixty bucks depending on the version and they are absolutely worth it.

I know how crazy that sounds, but trust me – once you have one, you’ll understand. I bought their Batman because I have to have any cool new Batman figure and it is the best action figure I have ever owned in my entire life. I’m not saying you should just collect all of the One:12 releases because you’d have to be pretty wealthy (or focused as a collector, I suppose) to do that, but any toy collector should own at least one. Wait for a character you like and go ahead and make that preorder with your favorite retailer – you’ll thank me.

I’m still chugging along and collecting, but there’s an odd calm right now. There’s nothing I am looking for at the moment – aside from vintage stuff – and nothing I am particularly looking forward to other than the Batman Animated figures.


Of course, that calm is likely the oft-mentioned “before the storm”, as Toy Fair is just a few weeks away and there are all kinds of nerd properties looming in 2016. Stay tuned to Needless Things and the Needless Things Podcast and we’ll tell you all about it!
Posted by Phantom Troublemaker at 11:00:00 AM