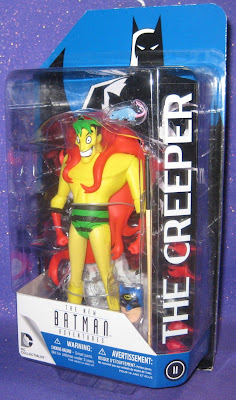 Sometimes I find myself thinking, “Man, my toy collection is a bit drab. It seems like action figures just don’t pop like they did in the eighties”.

Side Note: As I get older, many of my thoughts are along the lines of things not being the way they were in the 80s.

Today the Creeper is here to brighten up my shelves and possibly even induce a migraine, because this figure captures all of the clashing brightness of the original Steve Ditko design!

For years I didn’t really know much about the Creeper other than he looked like some kind of bizarre Joker knockoff. I think the first story I read with him in it was from either The Greatest Batman Stories Ever Told or The Greatest Joker Stories Ever Told. I know it was from one of those great older trades featuring multiple stories. Whatever story it was, it totally sold me on the character. I loved the idea of Jack Ryder letting his id out to play. It had to be in the late eighties or early nineties, because by the time “Beware the Creeper” aired as part of The New Batman Adventures I was excited about seeing the character.

As with most things, the DC Animated Universe gave me my favorite interpretation of the character, taking the best aspects and amalgamating them into one great version. And they certainly didn’t do anything to dull down his outrageous design.

So bright. This has been a fairly subdued line so far, but Mr. Ryder’s alter ego is here to change all of that. The figure looks incredible and those colors are almost aggressive.
So far DC Collectibles has managed to maintain the gravity-defying designs of Gotham’s inhabitants, from their huge chests to their tiny ankles. Creeper has his trademark… back hair? I’m curious to see how that’s going to work out.

Normally I start with the head, but that brilliant red back thing – a sort of boa on the show – demands comment. Unlike the old Kenner toy, this one is not removable, which is probably a good thing because the one on my Kenner figure won’t stay on. The sculpt is beautiful.

Rather than giving it a bunch of detail, it’s just this big, red blob that has a hairy outline and shape. It looks fluid and light (despite being a heavy chunk of plastic) and gives the figure a dynamic look.

While there are passing similarities with the Joker’s visage, this figure is an excellent example of just how different the Creeper is as a character. There’s no slyness or evil in his face. He just looks manic and wild. Those huge, oval eyes and gleeful grin are very different from Joker’s sinister, involuntary smile and hooded eyes. The sculpt of those features is wonderful, with the cheeks being particularly good. Creeper’s hair has a very out-of-control look. The paint is spot-on.

Creeper has a relatively basic body – most of the DCAU superhero males look like this. The physique is streamlined and simple. His skin is a flat, bright yellow that brings sixties design to mind as much as anything else. The green and black striped trunks compliment his hair and have a very delineated paint job – no slop or blurry lines.

There’s furry fringe around Creeper’s boots and gloves. It’s surprisingly narrow, but looks great. What surprised me was that it does not conceal articulation at either spot. More on that later.

The Creeper comes with a stand, two extra sets of hands, a pool cue, a rat, and a Batman mask.

The hands are open fists and “gotcha” hands. They switch out easily and aren’t particularly fragile despite the daintiness of the pegs.

The pool cue has four paint apps, which is crazy. It looks fantastic and makes me wish I had a pool table in this scale. The rat only has three paint apps, but it’s the cutest darn animated rat you’ll ever see.

The Batman mask deserves its own paragraph because it might be the greatest toy accessory ever made. Not only is it a faithful reproduction of the classic Ben Cooper Halloween mask:

The figure can’t really wear it or even hold it in front of his face successfully, but it’s such a great and perfect accessory that I don’t care (too much).

I’m a little tired of these stands. They all work slightly differently depending upon how the figure is designed and for most of them they increase the amount of shelf space needed. And at the present time, I am running short of shelf space. They aren’t bad stands, but I’m starting to wonder if DCC could have done better.

As I mentioned above, I was surprised that Creeper’s fringed forearms and calves weren’t hiding swivels. They aren’t really necessary for the forearms given the wrist swivels, but it would have helped a lot on the calves. The Creeper is one of those guys that you really want to be able to achieve a lot of wild poses – like squatting, for example – and this guy just can’t do it. He’s still fun to pose and his back fur actually assists a bit in some cases, as it’s a third point of contact for the ground.

There’s only so much articulation this aesthetic can support and still look good. Double jointed elbows and knees would be terrible. I’d prefer ball jointed hips with sockets, but that isn’t the way they went. Otherwise I think that DCC is doing about as good a job as they can.

The accessories can all interact with the figure in a meaningful way (though the mask is slightly less meaningful than the rest) and they’re all fun. I like Creeper standing around holding a rat:

Visually this is a fantastic action figure. He’s bright and stunning and brings some much needed color to your Animated Series shelf. Play-wise he’s par for the course within the line and while he may not be a s poseable as some lines, he’s packed with great accessories.

For me, the Creeper is a must-have. The character and the figure delight me. If you’re not a fan, you can pass on him and stick with the more traditional Bat-villains. He makes me happy, but he’s not so good he gets the “must-have” for everyone.