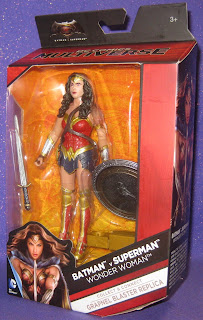 It’s been a while since I started a post with the words, “I had no intention…”, but it’s that time again.

I had no intention of buying any of the new Batman v Superman movie toys. I was all but done with Mattel after dropping the Masters of the Universe Classics line at the end of November (that full story will be up on Monday). But the new year brings new toys and new toy excitement, and as soon as I saw what appeared to be pretty decent looking figures of Batman and Wonder Woman on Amazon for regular price, I ordered.

My toy curiosity had been piqued. None of these figures shared parts. They looked much more detailed than any DC Universe Classics figures and from the look of it were larger than the Movie Masters (which I sold off last year). I collect Batmans, so a figure of the new Affleck suit was going to end up in my collection at some point. And heck – the armor was a whole different Batsuit. And it looked great.

Wonder Woman was the first one I ordered, though. She looked like an armored warrior. The colors were bright and there appeared to be a ton of detail. I had to find out if this was as cool a Wonder Woman figure as it appeared to be.

Side Note: I stopped by Toys R Us on the way into work on Tuesday and they had a ton of new Batman v Superman stuff – simpler 6” figures, many new styles of Batmobile, Hot Wheels, and role play stuff. Probably twenty-four square feet of new merchandise. I was quite surprised. Everything I saw was much better than the lousy Man of Steel merch and it was all reasonably priced. There’s a new 6” scale Batmobile that was only $24.99. It was a bit simpler and clearly meant for the basic figures, but it looked cool and the price was right. I am hopeful that this could be a sign of new beginnings for Mattel hat maybe they’ve got a better handle on the male action figure business over the last couple of years.

The face is a little wide. It also doesn’t photograph well. It looks so much better in person than it does in any online pictures, including these.

Her gear is awesome. The colors are brighter than we’ll ever see them in a Zack Snyder movie, but she looks fantastic. Design-wise this is the best Wonder Woman action figure I’ve seen.

Now that every toy company has separate lines for collectors and kids, they have to go out of their way to make sure that the collector stuff pops. Usually that means overwrought boxes with funky shapes. This line is no exception. This is basically like the Star Wars Black or Funko Legacy boxes, but with some extra angles thrown in. It looks good and does its job distinguishing the product.

The back features the Grapnel Blaster build-a-prop, which I’ll get to in a bit.

Since I can always spare some snark for Mattel, let’s take a closer look at the movie synopsis on the side of the box:

While the sentence that contains that nugget of English-as-a-second-language joy is much longer, that’s the portion that delights me. This whole paragraph consists of just two massive sentences. Aside from the bulky awkwardness of the thing, it’s actually a pretty decent summary. I mean, as far as I know.

Let’s get that head out of the way. Like I said above, her face looks much better in person than it does in any online photos. The sculpt is good (though I’m honestly not familiar enough with Gal Gadot to be a good judge) and the paint details are great. Her eyebrows, eyes, and lips are all spot-on. There’s even some eye shadow. What creates the illusion of a too-wide face is that fact that the paint on the hair doesn’t quite come in close enough to the face. Mattel really should have done a separate hair piece attached to the head like they do with the female MOTUC figures. It would have looked a lot better. The tiara has a well-defined sculpt and the star on the front has some silver paint. All of the metallic paint on this figure looks great.

The hair is thick and has a ton of sculpted detail, as well as a dark wash. It’s odd seeing a Wonder Woman with brown hair, but the hair does, at least, look great.

Wonder Woman’s armor is very similar to the second New 52 design. The golden trim is in the traditional avian shapes and the red has all of the sculpted plating from the comics. The plates dangling down to form a sort of skirt are different. I’ve always liked this look for Wonder Woman, as it has been used a few times in alternate reality stories (and probably the main DCU – I just can’t recall). These have a leather texture. There’s gold trim painted on the bottom that adds a lot of character. Overall the paint on this figure is a step above most of what Mattel has done over the past decade. The silver on the golden belt is great.

There’s also a harness that has that same leather texture. An oddly tiny golden lasso hangs on one side:

While the other has a loop to store the figure’s sword:

This piece seems slightly bigger than it should be and doesn’t sit quite perfectly on the figure. But it’s far from bad and adds dimension. I like it enough to excuse its very slight sizing issues. I’m impressed that it has paint, as well.

I had to look up what forearm armor is called, because I often use “gauntlet” even though I know it is incorrect when gloves aren’t attached. These are “vambraces”. Much more than the bracelets we normally see, and I like them. The sculpted detail incorporates trim to match what is on the rest of the figure, and the metal is aged and battle-worn. I also really dig the leather wraps around Wonder Woman’s hands. Not only are the individual straps well defined, they have leather texture. Much was done to make this figure look like an Amazonian ass kicker, and these forearms and hands add a lot.

The literal ass kicking would, of course, be done with these… battle sandals? There’s just as much detail here as on the rest of the figure, if not more. The gold and silver trim and red plating matches the rest of the figure. The straps and fasteners have painted detail. And while the articulation left some necessary gaps, thought was given as to how to present it. There are separate plates buckled to her thighs above the kneepads and the sandal aspect allows for bits of exposed skin tone that don’t look as bad as they could. I just love how these are so reminiscent of the design of Wonder Woman’s original boots.

Wonder Woman comes with a shield, a sword, and a thing that is part of the grapnel blaster build-a-prop, not that you can tell by looking.

The shield is the best action figure shield I have ever seen at this scale and price point. The sculpt is absolutely incredible and the paint is even better. There is lettering all around the edge that looks fantastic and the washes that give this thing age are amazing – unlike anything Mattel has done. This almost looks like a tiny Hot Toys accessory. The device to affix it to the figure’s arm is thick:

But it works so well. Rather than elastic straps or a clip or whatever, there are two separate pieces to slide the arm into, with the hand grasping the front piece. It’s wonderful and stays on the figure better than any other 6” scale shields I own.

Both the sword and shield are made of firm plastic (not rubber!) the sword was not bent(!) and has just as much sculpted detail as the shield. There is a bird near the hilt that matches the one on the shield and compliments the avian theme on Wonder Woman’s armor.

It fits perfectly into the figure’s hand or on into the loop on the harness:

The final accessory is part of a stand. Not even a whole stand – part of a stand. It is for the grapnel blaster build-a-prop that you get when you buy all eight figures that will eventually be released.

There are many problems here, but also one good thing.

I hate when Mattel spreads a build-a-thing over multiple waves. The later waves are never, ever distributed as well as the first wave.

This first wave contains a bunch of junk – no primary grapnel blaster parts. I understand why – Mattel doesn’t want us to build the blaster and then not buy this junk. That leads me to believe that the as-yet unannounced second wave of figures will include such hits as “Batman Repaint”, “Superman Repaint” and “Weenie Jesse Eisenberg Lex Luthor in Hoodie”.

The good thing is that this isn’t a build-a-figure of Doomsday (or whatever that CGI abortion is supposed to be), so if you don’t care about having a cheap, plastic grapnel blaster you don’t have to buy the other figures anyway.

Wonder Woman has much better articulation than your standard DCUC figure and it all blends into the sculpt much more nicely. She doesn’t have double jointed knees and elbows, but she’s got just about everything else. The waist swivel is a bit noticeable, but man is it better than an unsightly ab crunch. She has swivels at her elbows and low on her thighs that work nicely. Her ankles also have a nice range.

My big issue, poseability-wise, is her head. Her hair is thick, hard plastic so there is no moving her head around. If Mattel had done what I suggested above and done a separate hair piece it could have been soft plastic and would have allowed for movement. The funny thing is that the head seems to be on a ball joint, but that it’s rendered useless.

The accessories are fantastic and work well. The shield and sword fit exactly how they are supposed to.

The build-a-prop is actually a really neat idea. I’m sorry I poo-poo’d it up there. I’m just annoyed that all I have are three parts of a stand and some kind of clip thing. Nothing that resembles a grapnel blaster yet.

I love this figure. No – it isn’t as nice as the MAFEX version that’s coming out, but it also costs less than half as much. I think this one is the far better value.

As of right now, this is my favorite Wonder Woman figure. That’s not saying much, as I don’t exactly have a ton of figures of DC’s First Lady, but this is an excellent example of adapting a comic book design into a live action movie. Kudos to Mattel for the strong comeback after a few tough years.

Posted by Phantom Troublemaker at 5:09:00 PM