Universal Studios is going forward with their plan to reboot a shared universe for the most iconic horror movie characters of all time – their Universal Monsters.

Yes – reboot. If you don’t know, Count Dracula, Frankenstein’s monsters, the Wolf Man, and others shared a universe with interconnected films in the forties. While that was not the intention when Dracula was released in 1931, 1943’s Frankenstein Meets the Wolf Man started bringing the Monsters together.

Today I am not writing about how acceptable this undertaking is. It’s been done before to great result. I’m more trying to decide if it can be done successfully in today’s film market. I don’t know that I’ll come to any real conclusions, but it’s early Saturday morning and this is what I feel like thinking about, so bear with me and see if this sparks any thoughts for you.

As I started a review of Diamond Select Toys’ recent Van Helsing action figure I couldn’t help but think about how utterly disappointed I was with the 2004 Stephen Sommers movie. For the record, I love Sommers’ first two Mummy movies. When they came out it never occurred to me that the tone or style could be  “wrong” because I had seen so many different interpretations of mummies over the years that I felt like there was plenty of room for Indiana Jones-style mummy flicks. Although even that is an overstatement because I didn’t give it any thought. It’s only in retrospect that I realize that was the case.

I was a younger, more innocent geek then and didn’t look at everything as cynically as I do now. 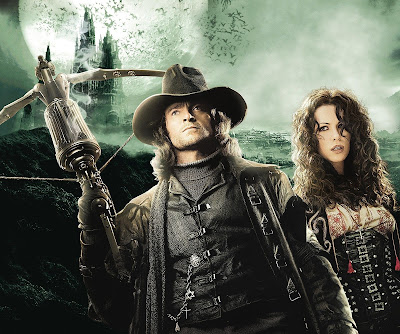 I suppose that Van Helsing might have had something to do with that cynicism. Obviously there had to be movies prior to 2004 that disappointed me, but the Hugh Jackman vehicle stands out in my mind as one of the biggest letdowns I can remember. I don’t even think of it as a bad movie like I do so, so many others. Don’t get me wrong – it is a bad movie. But it’s more than just that. It bums me out. I was so damned excited for it and so invested in the subject matter it was delving into. There was no doubt in my mind that it would be anything other than awesome.

While others may not take the following as indicators of assured quality, to me at the time these things meant a surefire amazing experience:

In my mind, this was ­for sure going to be the start of an amazing new film franchise with nearly limitless possibilities. I was looking forward to many installments of Hugh Jackman as a swashbuckling, adventure-loving, Steampunk (though I had no idea what that was at the time) monster hunter.

As we know now, that is not at all what we got. I’m not here today to review Van Helsing, so I’ll just say that it sucked. It was dour and dark and completely lacked the fun of Sommers’ Mummy movies. CGI technology was not ready to support what the movie called for – though there were some gorgeous moments – and the digital effects were a constant distraction. I also hated that – SPOILER ALERT – Van Helsing had to become a monster to win the day. I could go on, but like I said, that’s not the point of today’s post.

In 2004, the cinematic world was ready for the launch of a franchise series that would revitalize the Universal Monsters for a modern audience. Heck, even though Van Helsing sucked, it still made over $300 million worldwide and was one of the biggest blockbusters of the year. It’s a fucking miracle that there wasn’t a sequel. Nowadays there would assuredly be one, regardless of how much the critics shit on it.

In 2016, I think we’re all much more cynical about Hollywood’s intentions. We know that everything is being groomed as a trilogy, franchise, or series of movies. And when a studio comes right out and announces it that’s something of a warning sign.

I’m not saying that wanting to connect franchises is bad, but it means that we know to expect certain things from any film that is meant to be incorporated into one of these shared cinematic universes – open-ended stories, cameos, post-credit scenes, and a certain lack of finality. In short – many of the elements that made franchises so much fun in the first place because they weren’t necessarily expected have now become rote and stale. And beyond a shadow of a doubt a detriment to organic storytelling.

There are mixed reports as to whether or not 2014’s relatively crappy Dracula Untold was ever supposed to be a part of the new shared universe, it looks like as of now it officially is not. Recent reports say that a new Mummy movie starring Tom Cruise and the razor-footed lady from Kingsman: The Secret Service will kick things off. A report of Matthew Vaughn’s involvement would have done a lot more to excite me, but at least Sofia Boutella as the titular character is interesting casting. While I tend to be somewhat cynical about the reasons behind gender-swapped casting, this seems like a genuine effort to do something different rather than a PR stunt.

Tone is going to be very important in these movies. Universal wants the audiences to buy what they’re selling, so starting with this Mummy movie they need to establish a world where it feels like anything can happen. This is a bit hard for me to define, but the rules have to be loose. I know I pick on Christopher Nolan’s Batman movies a lot, but they make for a great example here. Because of Nolan’s more “realistic” take on Batman, those films could never have been the foundation for the shared DC universe that Warner Bros. is attempting. Fantastical elements like Superman, Green Lantern, Wonder Woman, and basically every other DC superhero simply wouldn’t have worked in Nolan’s world (which is a big reason I consider those failures as Batman movies).

While a movie about a dead Egyptian reincarnated centuries later may seem inherently outlandish and would seemingly set the stage for a huge suspension of disbelief, Universal and the creators of these movies need to be very conscious of allowing for the many disparate elements involved in the functionality of the Monsters. In order to have a shared universe, this mythology has to allow for a combination of the supernatural, biological, and scientific that’s above and beyond anything we’ve seen in modern films. Think about it, this world will have to incorporate the biology of lycanthropy and vampirism, the mystical elements of Dracula’s specific vampirism and the Mummy’s reanimation, the science involved in the Invisible Man and Frankenstein, and probably numerous other elements that aren’t even occurring to me right now.

This is an awful lot of shared fantasy and mythology. And a ton of exposition.

Side Note: I do not endorse any sort of shared cause for the Monsters – Dracula’s blood being used to create the Wolf Man and as an ingredient in Frankenstein’s Monster and the Invisible Man’s serum or whatever. I don’t care how much sense it seems to make, stuff like that robs the mythology of its richness.

The point I’m making is that it’s a lot easier to swallow these things in two specific contexts – straight horror or adventure. Grim drama is not going to get the job done because it is simply too restrictive.

Horror is its own genre that can encompass many different tones and styles. The problem with making these modern versions horror movies is that Universal would be limiting their audience for this potentially massive franchise and there’s no way they’re going to do that. If any of these movies is released with an “R” rating, I’ll eat a bug. They’re going to want the widest audience possible and they’re going to want to sell them toys and t-shirts and hats and frigging toasters with Dracula on them. And the thing is, if this is done right, they will.

In the right hands, the Universal Monsters shared universe could be Star Wars. Don’t think of the Monsters as the Avengers – think of them as Darth Vader and Jabba the Hutt and the Emperor. They’re not going to team up and fight Ultron. Granted, there are some characters that go far beyond being simple villains. Many iterations of Frankenstein’s monster have evolved into heroic figures. If done right, he could be the centerpiece of this pursuit, but I’m fairly sure I, Frankenstein ruined the chances of that happening. There are also opportunities for heroism with the Wolf Man and other Universal Monsters. Plus, it looks like Van Helsing is on the slate, so hopefully they can get that right.

I don’t agree with casting megasuperstars like Tom Cruise and Angeline Jolie in these movies. I also don’t want a bunch of teenagers running around. I think a batch of experienced but lesser-known character actors would be the way to go. It’s amazing to watch something like Alien and realize that most of the cast at the time were so old that they would never have been cast in a modern horror movie today. But Universal seems to have made up their minds and the megasuperstar bell can’t be unrung, so we’re just going to have to hope for the best.

As distrustful as you and I may be of Hollywood at this point, we can’t deny that the studios want to make money. And the Universal Monsters are a proven commodity with almost limitless potential for expansion and storytelling. If Universal takes their time and places their trust in the right people I think they could do something genuinely exciting and different with their Monsters and the world they inhabit. I’m not going to go off on a fantasy booking tangent here, but just think about the rich, fascinating world that could be created by bringing the best bits and pieces of the science and magic of the Monsters together in a modern way.

I’d love to hear your thoughts about the Universal Monsters Cinematic Universe – head on over to the Needless Things Podcast Facebook Group and get in on the conversation!

Buy any of the stuff on the page and Needless Things gets a ha'penny! Or just click the links and buy other stuff, like deodorant and socks!: