My Breakfast With Bowie 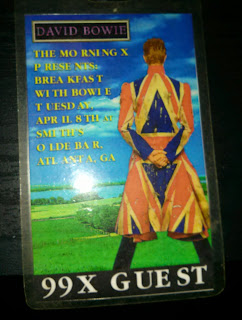 Before I get yelled at for false advertising, that's what they called the show I saw. I did not literally have breakfast with David Bowie. It was just called that because he played at 9 in the morning; which I guess is breakfast for some people. My breakfast is usually closer to 7, but I think that was too early even for a man like David Bowie.  If I had really eaten breakfast with Bowie I would have totally told you guys that story like a million times already. Me, Bowie, a giant plate of bacon, and a bunch of mimosas... 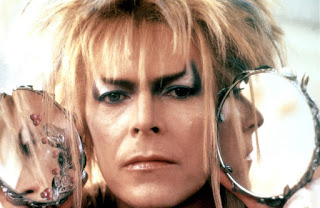 I could go on and on and on about what a big influence his music and movies had on my life. I could REALLY get into some stuff about how David Bowie's "pants magic pants" made Labyrinth into a coming of age movie for me. Don't judge me, kids were more innocent before the internet. I could talk about how The Hunger, or The Man Who Fell to Earth, or any of his other memorable movie roles. I could talk about how certain points in my life are so wound up in his songs that I can't hear some of them without traveling back there again. But there's probably a lot of that going on right now, and I don't want to be just another voice screaming my anger and sadness into the dark. I'd rather talk about what is possibly the coolest thing that I've ever done on my entire life. My "Breakfast With Bowie".

Back in the days when alternative-rock was still kind of a new thing there was a radio station called 99X. They had a really good (for radio at the time) morning show. Look, radio was all we had back then people. And way back in early 1997 they were heavily advertising that they were going to have David Bowie play a show in the morning at Smith's Olde Bar. For those of you not from Atlanta it's a pretty small venue. The kind of place that normally hosts smaller or local acts. I think it holds a few hundred people max so it was kind of a big deal for someone like David Bowie to play there. As I never seemed to be able to get through when they were giving tickets to the 10th caller I couldn't get my hands on the coveted passes. I was waiting tables at the time so was working late nights, and on my way home from work the night before the show the DJ was talking about giving away more tickets at the venue before the show. Doors were to open at 6 in the morning, and they would draw names to see the show. Since it was already after 1 by the time I got home I woke up Mr. Tibbs, and said "hey, do you wanna go see David Bowie this morning"? He groggily agreed, and the coffee mainlining began. 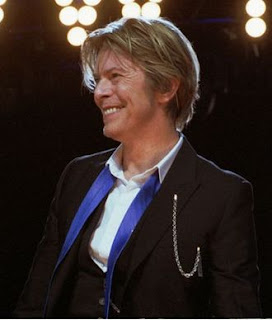 Out of boredom and the need to keep moving to stay awake we headed downtown early. I think we got to Smith's a little after 5, and a few people were already waiting. Unfortunately, the people running the bar that morning weren't expecting anyone that early so we had to stand around outside for awhile before they let us in. By the time we got in there were actually a lot of people there, and we had to share a table with another couple who became our buddies (and most hated enemies a few hours later). No one from the radio station was there that early, but there was a box to put your name in to for the ticket drawing. Being the tired and enthusiastic fans we were we put our names in a lot. Like how many times you'd get lotto tickets if they were free a lot. About an hour later the morning show crew arrived and started setting up and talking to people and just kind of hanging out. But when the broadcast started they started laying out the rules. Rules like "one entry per person" kind of shit. Well, we weren't going to take our names out of the running, and there were so many people there by the time they started pulling winners that we didn't really worry about it too much.

So the girl sitting with us had her name called first. Clap, clap, bitch. I knew we still had a chance though, and our new friends hadn't quite become our new enemies yet. When the guy of the couple had his name drawn it all went horribly awry. Since he was getting in with his girl he sent Mr. Tibbs up to claim the tickets in his name. The DJ must have noticed something was up because he then asked Mr. Tibbs some of the other information that was on the card. In classic Mr. Tibbs fashion he turned to me for answers when asked for his address. Then the DJ jumped the gun and tried to have us all thrown out for cheating or collusion or whatever. One of the other DJ's (who we had been chatting nicely with an hour before) comes over and starts yelling at us in front of the whole place, and was really just being unnecessarily shitty towards us. Enough so that a station manager comes over and tries to make nice with us. Once I explained everything that led up to our being publicly humiliated (which I admit I played as more upset than I really was in hope of seeing David Bowie).  She offered our table 3 passes for the 4 of us. The couple who were once our friends grab 2 passes and disappear upstairs. I asked for another pass as nicely as I've ever asked for anything ever, but she would only give us one.

Now comes the part of the story that made me realize Mr. Tibbs was a true keeper. Skip ahead if you don't want to read any mushy love crap.  He said to take the single ticket and go without him since I was a bigger fan, and it had been my idea to come in the first place. I felt extremely guilty, but went anyway (I'm not an idiot!). I felt better knowing that he could at least watch on CCTV, but still...for him to sit alone in what was now a very crowded bar full of people who had gotten a good night of sleep was fairly damn awesome of him. Okay, enough with the feels. I'm sure you're ready to hear about the show. 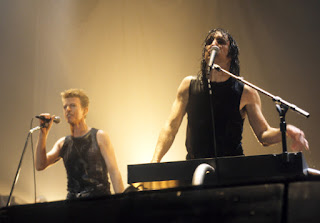 Once I walked up the stairway to my idea of heaven I ran in to my friend who had gotten tickets and invited Gnoll to go with him. While jealous to not have had a shot at that ticket (and thus saved a lot of sleeplessness and drama) I was happy to have some friends up there. I really couldn't tell you an exact number of how many people were there, but I'm sure it was 200 or less. I wasn't right up on the stage, but in a place that small who cares? David Bowie and long-time guitarist Reeves Gabrels came onstage with nothing but themselves and a few guitars. I saw David Bowie on tour with Trent Reznor on the Outside tour in 95, and saw Bowie alone at (the small-ish) International Ballroom in late 97, but I never in my life imagined I would be so close to the man. If you want a set list or a blow by blow I can't give it to you. I was too excited, too wired from not sleeping, and just too freaked out by what was happening to have super clear memories of every little detail. There was an obligatory interview session, but Bowie kept it light enough to keep it from being annoying. I will also tell you that it was every bit as amazing as you think it would be. That man could fucking sing no matter where you put him. He played several songs off of Earthling since it had just come out a few months earlier. I'll admit that this isn't one of my favorites, but he played two of the songs I didn't care for in a way that has made me love them forever. If you've never heard Dead Man Walking acoustic I insist you do so now. Seven Years in Tibet is also a much better song done that way. It has nothing to do with any Brad Pitt movie, I promise. I can only find audio files with static pictures on youtube so I won't bother with links. It only counts if you're watching those two men play. My mom was so excited when I told her what we were doing that she turned on the radio in her office and taped it for me. My dad went back later and digitized a few of the best songs for me so I'll be able to hang on to that forever. I do still have the whole taped thing somewhere though.

I will always be thankful to getting to be a part of such a once in a lifetime experience, Not a lot of stars of his calibre would do something like that, and there will never be anyone else like him. I honestly can't even go on too much longer without getting this weird leaking from my eye sockets that us robots aren't supposed to have.  I watched the video for the new song Lazarus, and dare anyone else not to leak ocular fluid. I had a pretty tough time writing after watching it till tell the truth. Watch it at your own risk.

Personally I don't like to think of Bowie as gone.

Maybe he's in the Black Lodge with Dale: 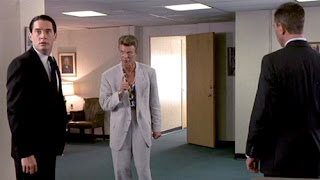 But maybe he's just going to float around giving advice from now on: 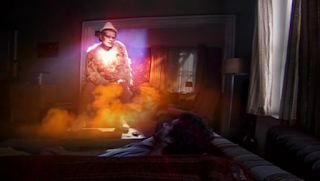