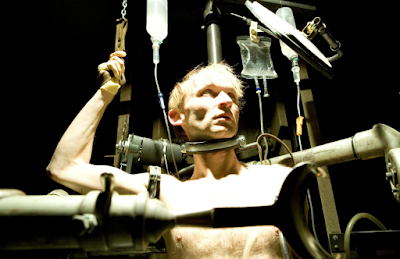 Prepare yourself for floods of bodily fluids in this week's edition of Devlin's Domain. I'm taking a look at a film that portrays some very depraved individuals from three different generations. If you can handle the blood, vomit and bile then you are worthy to proceed and see what art spills from the guts of the human body.


It's been said that you can choose your friends, but you can't choose your family. Some of us have been fortunate enough to hit the genetic jackpot, while others are doomed at birth to suffer the existing circumstances of their parents. Transcending the less ideal circumstances is a seemingly impossible task that a rare few have managed to accomplish. For the rest they often end up repeating the lives of their parents and bring forth a new generation of botched humanity.

There are varying reasons why people choose to reproduce. It is common for a parent to live vicariously through their child in hopes of their offspring achieving where they had failed. Or perhaps they want their child to follow in their footsteps and carry on an established legacy. At our current point in history the closest thing to living forever is to spread your DNA to another host. The problem with having all these plans for your offspring is that they are not you. Although some characteristics may carry down, the child will be it's own person and will have different ambitions. For some people this is too much to bear, especially when the child strays so far from the goals that had been established.

I do not have any children at present and I have no plans to change that any time soon. I have my own reasons for making that choice that some may not understand or agree with. I have likely not lived up to the expectations that my father likely had in mind when I was a child. Although over the years his expectations may have changed. It is for these reasons that I can identify with our end character in this film. A character looking to maintain a legacy without children to carry it on. Welcome to life in...

This film is set in Hungary and is divided into three different segments, acting as a sort of anthology. If you've made it this far then there's a good chance that you trust your stomach to handle some of the wonderfully grotesque imagery presented in this film. If the film lacks anything in substance it makes it up with style. The imaginative camera work creates a surreal ambiance that you can get lost in. The first segment of the film in particular has a very dreamlike quality to it that becomes nightmarish at times. 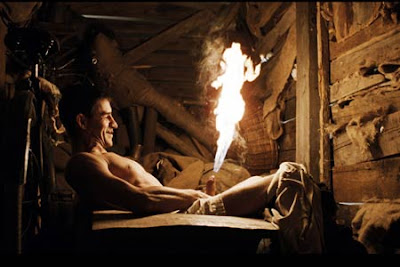 The frequent sexual fantasies about his commander's rather large wife eventually become a reality. Images of their copulation are artfully intertwined with his intercourse with the dinner pig. The result of their adulterous union is his execution and the birth of a pig tailed child. The commander is disgusted, but keeps the child regardless after removing it's tail. 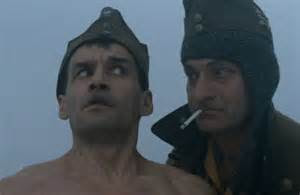 The second segment jumps to the adult version of the pig child. We are introduced to him and a line of other obese men gorging themselves at a slop trough for an eating competition. Obviously inheriting his mother's figure, he is a champion competitive eater. They eat more than the body can process at one time and visit vomiting stations afterward. Here's where most of the body fluid comes in. Gallons of vomit is spewed from these fat bodies as they hand crank it all down a disposal.

During this segment we see a sickening glorification of gluttony. Children are trained at a young age to take part in these disgusting competitions. They shovel in huge spoonfuls of nasty looking slop that stretches their stomachs to an obscene size. This is probably the most nauseating of the three stories. Although a bit of it carries over to the next segment. 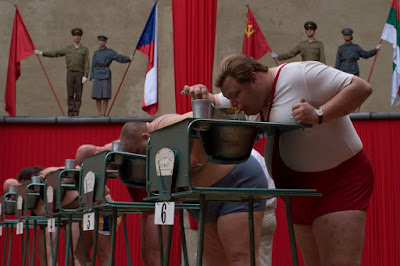 The champion eater eventually finds love in a female competitor. After a short courtship the two get married. She's a bit of an infidel and embraces more than her husband. She ends up pregnant, presumably by her husband. After she gives birth he becomes a proud father, temporarily. 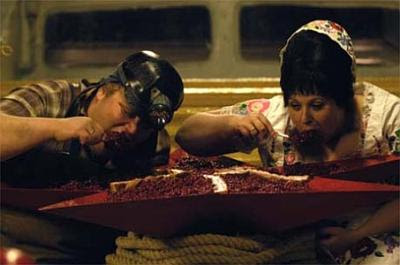 The final segment showcases the son of the champion eater. Surprisingly he is rather skinny and sickly looking despite being the descendant of two pig monsters. He's a shame to his father who he spends his time taking care of. His father has gotten so big he is basically immobilized. He's surrounded by cases of chocolate bars which he spends the days eating with foil wrapping intact so he doesn't have to chew. He explains that the foil is slick and slides easily down his throat, which allows him to eat more in a shorter amount of time.

The son obviously hasn't pursued competitive eating as his father had hoped and has instead taken up taxidermy. He owns his own shop filled with the stuffed corpses of animals. He is a socially awkward fellow and is having difficulty pursuing a woman he's interested in. He realizes that the chance at a normal existence is beyond him and gives up on the thought of marriage and children. 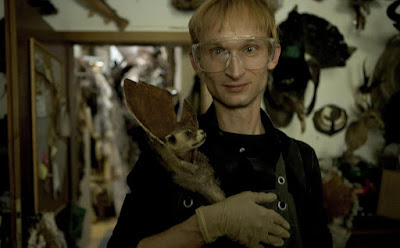 While dealing with his own internal torment, he grows tired of his father's constant disapproval and let's his hungry cats out of their cage to prey on his physically helpless father. They rip him open and burrow into his stomach, eating him alive from the inside out.

Now settled into the reality of his situation, he intends on making a legacy of his art. He won't have children, but he wants to leave the world something to remember him by. The result is his taxidermy masterpiece, himself. He partially preserves parts of his body while he's still alive. Then while inside a unique contraption he waits for his final client to pick up his piece of taxidermy. When the client shows up it triggers the contraption to finish the self taxidermy, leaving a macabre work of art made of human flesh. 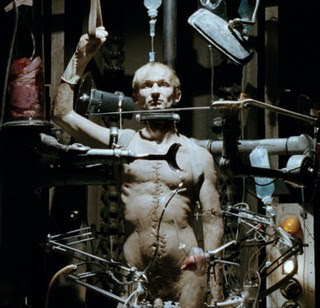 This is just an awesome movie. It's effects and camera work are top notch. It manages to be revolting and beautiful at the same time. There are very few films that can be this disturbing while maintaining artistic integrity. Perhaps there is even more to the film than meets the eye. It may be some kind of statement on the political state of Hungary throughout the years. It does seem to follow the transition from fascism to communism to the present propping up of a dead system. IMDB gives this one a 7.0, I'm going to give it a 9 cause it's that damn good.

That's it for this edition of the Domain. You can expect more disturbing, grotesque chaos next time. I am always looking into new obscure films, and there's plenty more out there.


About Me: I have a couple of different aliases, but for this column I will use my middle name. I am Devlin and I currently reside in Atlanta, GA. 32 years of age and still feeling immortal. Former Rockstar, current Pro Wrestler and hell, I'm still a Rockstar at heart. I got my first taste of obscure cinema when I was about 8 years old. My Dad would take us to the video store every weekend to stock up on classic horror films to watch on his projector. They were mostly harmless, PG-rated horror films like the great Universal monster movies. Then one night he rented a movie for himself to watch after we had gone to bed. I was so intrigued by this film that I wasn't allowed to see. I begged and begged and he eventually caved. That night I was exposed to a film unlike anything I had seen before. Ever since that night I wanted to find more films that gave me that same sensation. I wanted to feel shock and disgust. I found my place in the Horror aisle. The film I watched was Faces of Death. Thanks Dad.www.facebook.com/DevlinValek
Posted by Devlin at 9:41:00 PM