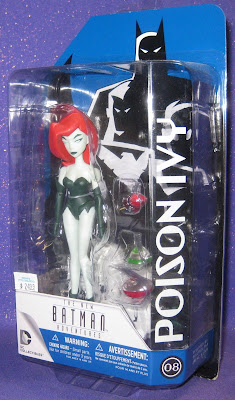 It will be Christmas in just a few days, so I wanted to be sure this post had some Holiday spirit! And what’s more appropriate for the holidays than Ivy?

Wait – crap. Holly is the Christmas plant. Or poinsettias. Ivy has nothing to do with Christmas.

Poison Ivy is definitely one of the wackier villains from Batman’s rogues gallery. The ability to not only control but to spontaneously generate plant life definitely pushes the boundaries of my suspension of disbelief. I know that sounds weird when we’re talking about a universe with a shape shifting clay man and that is regularly visited by a rhyming demon, but for whatever reason Ivy’s powers have always pushed the limit for me.

Not that I don’t buy in; I do. But I just don’t examine her plant power too closely.

That being said, Ivy’s character is one of my favorites. Over the years she has been portrayed as a protector of Mother Earth, a genocidal maniac, and everything in between. While her base motivation is always preserving the environment, her actions and the extremes she is willing to go to have varied according to what the given narrative called for. In a way she’s as malleable as the Joker, but with the believable and somewhat sympathetic motivations of Mr. Freeze.\

Batman: The Animated Series and The New Batman Adventures presented an Ivy that was a little less genocidal. Over time she even softened up into more of an anti-hero role (leading to her relationship with Harley Quinn in modern comics). Ivy always had good stories, though. She was one of the characters that you could enjoy without reservation.

Her look changed significantly from one show to the other. I have a slight preference for this, her New Adventures design. But I like the original enough that I’ll buy that figure, too whenever they release her. Like Captain Kirk, though, I just like a green skinned girl.

Ivy’s red hair is a great contrast to the rest of her. The proportions are spot-on, as they have been with all of the figures in this line. This is another striking figure.

I hate that my flash has washed out the lighter colors on Ivy, because you’re missing out on her irises. The facial sculpt is excellent and definitely has the slightly disdainful look with which she regards all non-plant life, but her eyes really sell it. Her hair is a separately sculpted piece that is very simple but that captures this version’s more complex style. It’s a little wilder and bigger than Animated Series Ivy’s.

Her body has the signature Bruce Timm pinup shape. The big difference between this line and other toy lines is that Ivy’s costume would have been painted on in other lines. Here the bodysuit is sculpted and it makes all the difference.

Ivy’s gloves are also sculpted, although I can’t imagine any toy line just painting these on. These are taller and simpler than Animated Series Ivy’s and I prefer them. Her hands are once again very recognizably Bruce Timm-style.

Ivy’s boots have points at the top that give them a ton of character and make them more than just little booties. Most of the figures in the line have severely pointed toes, but they look particularly good here. A lot of Ivy’s costume has sharp angles and points, so it works.

The coloring is very simple. The flat greens match across Ivy’s bodysuit, gloves, and boots, as well as her makeup. Her pale green skin looks consistent across the figure and that red hair is bright and strong – a great focal point on a strong figure.

The stand is the same three part apparatus that has come with the other figures in the line. At first I liked it (except for the base being white), but now that I have a bunch of these figures (and a Batmobile), I’m starting to think these take up too much space. Fortunately I only have one figure so far that can’t stand up without one of these (I can’t remember who it is at the moment), so getting rid of them on the shelf shouldn’t be much of a problem.

I love these chemistry containers. They look fantastic and so do the liquids in them. The smaller ones are flasks. I tried to look up the name of the larger one, because I feel certain it has a fancier designation than “bottle”, but I couldn’t find anything quickly and it just isn’t worth hours of intensive research to attach a name to a tertiary action figure accessory.

The hands are all great. Unlike the Mattel line, we don’t have to worry about whether or not it’s appropriate for Ivy to have fists. Here she has hands for holding, punching, and just standing around. They switch out just fine. The pegs are super tiny, but everything that came out after that first wave has been sturdy. I’d still be careful, though.

I don’t like the hip joints on these figures. Let’s move on.

DC Collectibles has hit the formula for this line. The joints are about as useful as they can be without detracting from the aesthetics of the figures. You can achieve a huge variety of dynamic poses as long as you don’t need them to squat or hold a small item with both hands.

The accessories of this line are a major selling point for me. Every once in a blue moon Mattel would include what felt like the minimum appropriate number of accessories with a figure (Bronze Tiger, for example). DCC includes at least that with each figure. It might have been nice to get some kind of plant with Ivy, but I’m halfway expecting the Animated Series figure to be a box set with a giant, man-eating Venus flytrap.

These are all fun figures that give you plenty to do once you open them.

Poison Ivy is the best figure possible within the design parameters of this line (stupid ugly hips). I can’t think of a way this figure could have been better aside from some plant accessories.

If you want to you can help out Needless Things by buying Ivy from Amazon!: