Toy Review – Masters of the Universe Classics Saurod from Mattel 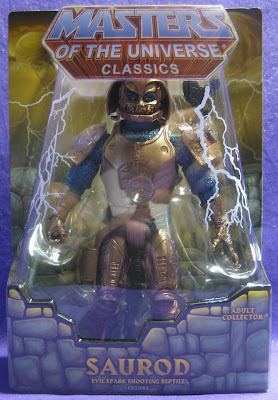 While I have a fondness for the live action 1987 Masters of the Universe movie, I haven’t been overly excited for any of the figures from it. The vintage versions weren’t exactly great representations of the on-screen characters and the Classics updates – while much better action figures – were obviously being done in the Classics style. I’ve always dreamed of a line of more realistically proportioned movie figures, like Mattel’s Movie Masters.

I realize how ridiculous that is and that virtually no other Masters fan would agree with me on that point, but the heart wants what it wants.

I am, however, not opposed to these guys. They’re necessary to fulfill Mattel’s original goal for this line and we’ve certainly had far worse characters and designs released. The worst thing I can say at this point is that it’s a shame we can’t have Classics versions of Saurod and Blade’s other movie pals, Beast Man and Karg.

Okay, so Saurod does look pretty awesome. He definitely leans more towards the New Adventures end of the spectrum, but he has a distinctive look and tons of sculpted detail. This guy looks like he would absolutely destroy the rest of Skeletor’s goons.

Oddly enough, Saurod has what might be the best made-up biography that has yet been offered in the Masters of the Universe Classics line. I love every single word of this, from “rode a meteor shower across the solar system to Eternia” to the final sentence that basically establishes Saurod as a time-traveling lizard Nazi.

When I was a kid it always bothered me when I couldn’t see the face of an individual character. Goons and troopers were okay, but enigmas like Dr. Klaw and Cobra Commander made me nuts. Saurod would’ve done the same, perhaps more so because I can actually see his eyes and can only imagine the snout that lies beneath that breathing mask (or whatever).

Also, it has just now struck me how Darth Vader-y this guy’s head is. Holy crap. He basically just needs the face mask to clamp on over the lower portion. And a black paint job.
The sculpt on the head is fantastic. The helmet and mask are covered in detail and the exposed skin has scales all over. Saurod’s eyes are particularly evil, with an unusually good paint job. There are even hints of pink at the corners of his eyes.

The figure has a definite samurai aesthetic. It strikes me as odd that there was never a straight-up samurai guy in the Masters line. I like the bronze color of his armor, which is good because there’s a lot of it and it isn’t broken up by any paint detailing because that would have cost money. Matty used other colors only where they absolutely had to. Saurod has some kind of weird green shorts with buckles on them under his armor, but the joints that connect his legs to his hips are an entirely different color from any other part of the figure, which is a terrible eyesore. I don’t mind those joints being exposed because I honestly don’t think that they look that bad, but they need to blend in, color-wise.

Saurod’s tail is built into the piece at his waist and is not poseable, but that doesn’t really bother me. I’m impressed that there’s actually a coat of paint on the underside, though it does look odd considering that color is not present anywhere else. I’m not crazy about the way they designed the ponytail thing. I would prefer it be hanging straight down. As it is it almost looks like it was put on incorrectly.

Saurod’s hands remind me a lot of NECA’s Predator figures, and I mean that in a good way. These are some of the most detailed hands in the line. They look well-armored and menacing. I dig all of the detail on his gauntlets, as well.

I find it weird that Saurod wears boots as opposed to having bare reptile feet, but whatever. His weird, open-calf footwear looks fine and matches the style of the rest of his gear.

The functional holster is a great touch and has some nice sculpted texture, but it looks pretty shitty. The color makes it stand out from the rest of the figure in an unnatural way. It doesn’t blend in at all, and the lack of a paint wash gives it a very Dollar Tree look.

Saurod comes with a blaster.

A rubber blaster. I hate that. Otherwise it’s fine. The sculpt is packed with detail and the metallic plastic looks nice. It fits into his hand or his holster, so aside from being floppier than (extremely dirty metaphor) it’s great.

Saurod can be posed in all of the same ways as the rest of the line, minus the calf/boot-top swivels that many of the figures have. His arms can hang a bit more naturally thanks to his torso armor having a slightly lower profile. His tail helps support poses, so that’s neat, too.
While Saurod looks cool , he’s a pretty bare-bones release for the line. Aside from his articulation and blaster there’s not much to write about here. You could lay him on an exposed light bulb and watch him melt, I suppose, but I wouldn’t recommend it.

Saurod is a mostly great looking figure that I got a little more critical about once I really started examining him. On the shelf he is very pleasing. But up close there are some flaws that I can’t help but think could have been eliminated or at least handled more skillfully.

If you can get him for under thirty bucks I think you’ll be happy with this guy. He’s one of Skeletor’s most menacing goons and stands out on the shelf thanks to all of that bronze.