Toy Review – Masters of the Universe Classics Dragstor from Mattel 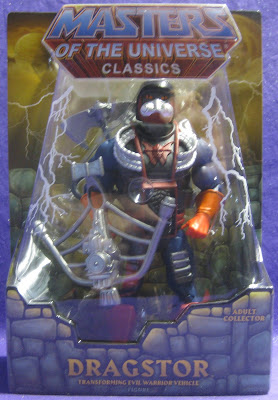 Dragstor must be middle-aged, because boy – look at that spare tire!

We all knew Dragstor wasn’t going to have a functional wheel. Despite how Buzz Saw Hordak was handled (no review of him because I sold that redundant turd), Matty didn’t see fit to put a functioning wheel in this guy. My poor friend and co-host, Mr. Beau Brown, held out hope seemingly until the end, but I always knew better.

It was stated from the beginning that these figures would not have the action features of the original line, but I feel like both Dragstor and Rio Blast should have been exceptions to this rule. I would have paid extra.

So the wheel was out. Once you’re past the wheel thing you have to look at the rest of the figure and decide if Dragstor is a worthy, well-executed update that fits in with the rest of the Masters of the Universe Classics line. Which is what I’m going to do now.

I never had the original toy:

So I wasn’t sure what to expect outside of a wheel in his belly. I remember him from when I was a kid, but typically action figures with gimmicks as extravagant as a tummy tire were shit propositions. All of the focus was on the gimmick and not the rest of the figure. This doesn’t appear to have been the case with Dragstor. The original appears to have had functioning arms and legs and to be pretty much a good action figure regardless of having a wheeled torso. That’s really my gauge for how good a gimmick is – does it work and does the figure still function as a figure? It looks like the original Dragstor accomplished both of those things, so good for him. Or Mattel’s design team, I suppose.

This is one of the most terrifying heads I’ve seen in the Classics line.

A lot of Dragstor’s design looks like it could have come straight from Mad Max. Heck, with just a few tweaks and some muted colors he could easily be an extra from any of those movies. With that concept in mind, I like Dragstor a lot more than I thought that I would.

I’m not wild about Dragstor’s bio, but at least his real name isn’t utterly stupid. I don’t know what I think would have been better as far as a backstory. I suppose it fits with the theme of Hordak being sort of a deranged Mr. Roarke from Fantasy Island.

Here’s another guy like Saurod whose face is partially concealed. For some reason, though, Dragstor doesn’t bother me as much. I think t’s because what we do see of his face is much more toy-like and somewhat less interesting than Saurod’s. I imagine there’s just a wide, frowny mouth under there.

The head design is great and the sculpt is good. I like that the helmet is somewhat unremarkable. It’s a racing helmet and doesn’t need a bunch of detail. His Immortan Joe-like breathing apparatus – the design of which predates Fury Road, by the way – looks great and is different from any other Classics figures. Even guys with similar setups like the aforementioned Saurod and Karatti. It looks like race car stuff. His exposed reptilian face is sculpted well, but looks plain. A dark wash would have helped. Also, his pupils are painted down onto his cheeks, which looks like shit.

The fact that Dragstor doesn’t have goggles makes my eyes hurt just thinking about it, but it’s true to the original design, so what are you gonna do?

The same goes for his color scheme. It’s pretty awful. He would look so much cooler if he were all black and red or a darker blue, but we’re stuck with his 80s “this needs to be bright for kids” look. If I had the time or patience or cared enough to customize figures, this guy would get a paint job. At least those orange gloves would have to go.

The torso is pretty awesome. The wheel looks fine for what it is, but everything else is very impressive. The first thing worth noting is how low-profile the piece is. This thing could have been monstrously bulky and made Dragstor look like a real idiot, but the design team managed to create something that is relatively sleek and yet still looks like a cyborg nightmare (I mean that in a good way). I’m always happy to see a Horde crest and this one looks good surrounded by trim and hoses.

Dragstor’s “backpack” is a pile of exhaust pipes and car things that look great but honestly could have been so much greater with a little paint. It’s not bad by any means, but some detailing would have looked really killer. There’s a loop at the top to store his unique crossbow. I’ll discuss that in a bit.

Dragstor has what I’m pretty sure are unique boots, but I can’t keep track anymore. They look good and almost seem like they could serve a specific function for a guy that turns into a… wheeled guy. The same goes for those weird things affixed to his thighs. My guess is that that’s his braking system. They’d look so much better if his legs were grey or black.

Dragstor comes with a crossbow and an… ax whip?

The crossbow is fantastic. I love the unique crossbows that the Four Horsemen have been designing for the Horde members in this line. Obviously this one is perfect for Dragstor. It plugs into the loop at the top of his engine or backpack or whatever:

The result is pretty unwieldy and ridiculous, but I like it.

Speaking of unwieldy and ridiculous, the ax whip isn’t designed how I would have designed it. In a bizarre turn, unlike most weapons in this line it is made out of hard plastic(!). This means that it is stuck in that odd, unnatural curving position forever and won’t ever look like it is actually in any sort of whip-like motion. So one of the few weapons in the entire line that should have rubber parts doesn’t.

Oh, and this thing is meant to represent the ripcord that was used to propel the original toy. It does a fine job of that.

Aside from the materials used, this weapon does look great. The ax head design is somewhat evocative of an automotive sort of thing and the whip portion looks wicked with that serrated edge. I just don’t care for the shape the thing is sculpted in.

As far as poseability goes, Dragstor is your standard MOTUC release.

If you consider trying to figure out how to pose a figure so that he looks like he’s driving around on his tummy fun, then this is the guy for you. That aspect of this review did take a little more time and provided me more reason to handle this guy than most other Classics figures, so I suppose I’d call that a win.

I do have to admit that he looks pretty okay in the “driving” position. Heck, better than any Superman figure that I own looks in a flying pose.

I like Dragstor a lot more than I thought I would. His colors are awful and his wheel is useless, but those are both within the parameters of the design mission of the Classics line. So I can’t very well deduct points there. Design-wise he’s pretty cool and is an excellent update on the original figure. I’m happy to have him on the shelf.

He’s a solid four that could have been a five pretty easily with just a bit more paint and thought.