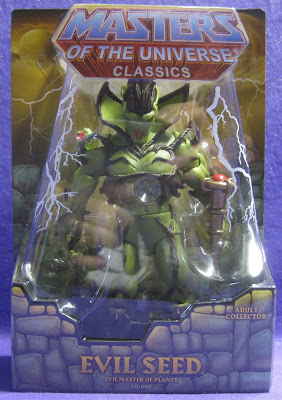 This 200X sub-subscription has been providing some of the best figures the Masters of the Universe Classics line has seen. It’s almost like they’re from a different company. I don’t know how much of a hand Scott Nietlich had in the development and final production of these figures, but whoever is responsible for the design and quality should be commended.


Evil Seed is a solid, menacing villain from the 2002 cartoon. I can’t say he’s a favorite of mine story-wise, but his design certainly makes for a great action figure. I will say one thing about Evil Seed’s looks, though – he doesn’t look like a foil for Moss Man. I feel like there was a lapse in the usually excellent Masters design process. He looks like an evil plant for sure, but he’s lacking elements that visually identify him as Moss Man’s villainous counterpart. If they’re both supposed to be plant elementals, he doesn’t share any common elements with Moss Man. If Evil Seed is some sort of unrelated but oppositional entity, he doesn’t have equal but opposite design aspects. If he’s seeking to corrupt all plant life, maybe he should be black and brown or dark grey. I dunno.

I’m not dumping on the character. I think the design is awesome. But as a direct nemesis for Moss Man I feel like they missed the mark. In a line where you repaint guys to make other guys, it’s really odd that Mossy and Seed don’t have more similar characteristics. And as much as I complain about farmed parts I can’t believe I’m making an issue out of a unique design.

All of that is neither here nor there, as today’s job is to evaluate how well the Four Horsemen and Matty adapted the animated Evil Seed into this action figure.

Evil Seed looks like something from a SyFy Original Movie, and I mean that in the best way possible. I can totally see this guy reaching out of some promotional art with stylized horror letters spelling out his name. Maybe he’d be reaching for Casper Van Dien or Tiffani Amber Thiessen.

I’m also immediately impressed with the little bits of kibble they stuck on this guy to make him work. Not just how it looks, but how it’s engineered and interacts with the figure. More on that later.

The bio is strictly for the 2002 Evil Seed since the Filmation version is going to be –and had to be – and entirely different figure.

Side Note: I still firmly believe we need a 200X style Moss Man, as well as Roboto. Maybe more, but those are the two that stand out the most. If Prince Adam was a factor in my own personal Masters mythos I’d include him as well.

I love this head sculpt. The design is monstrous and organic and perfect for a plant-based bad guy. The brown roots or vines or whatever sprouting from the top of Evil Seed’s head have an interesting shape and are painted well. His red eyes peer out from under a thick, knotty brow and they’re nice and bright and well-placed. Unfortunately his mouth is a mess. The sculpt is cool, where it looks like the matter was torn through to give this villain a voice, but the paint is terrible. It’s faint and half-heartedly applied at best. It almost looks like a child put it on with a red Sharpie. It’s one of the worst paint apps I’ve seen in this whole line.

Evil Seed has an interesting new torso piece. Rather than covering his whole torso with a bulky vest, the designers sculpted only what was needed – a chest and upper back, some vines, and a collar. It looks fantastic and avoids the top-heavy look that so many of these Classics have had. The paint on the brown vines looks great and is applied well. What bums me out about this piece is that nobody thought of doing this sort of thing six years ago.
Granted, many of the torso dressings in the line require the full vest treatment, but I’m sure there are some that could have been slimmed down.

The lower abdomen has a similar piece, with vines that extend up over the waist and that hand down to wrap around the thighs. It’s a simple way to make the figure look different and new.

There’s plenty of new on the figure anyway. Evil Seed’s spiked shoulders, forearms, and hands look great and have simple but well done paint apps. I particularly like the sharp, brown claws on his fingers.

His calves and feet are also new. The chitinous plating is creepy and weird and those knees look brutal. He’s also got some wicked spurs on the backs of his ankles:

Head to toe this is a very simple but very striking figure with some clever new elements that work to make it unique.

Evil Seed comes with a scepter and a vine.

The scepter is the Scepter of Power from the Filmation cartoon. It’s big and kind of wonky and the colors don’t match the cartoon version. I don’t particularly like it, but I’m glad that Matty is producing these Filmation artifacts and I don’t begrudge anybody that is thrilled to own one. Good for them.

The vine is rubber. Normally I am opposed to rubber accessories, but in this case it’s fine. Preferred, even. The sculpt is great and the little set of jaws on the end are creepy. The paint is also quite good considering the material this thing is made of. It’s sculpted to wrap around and extend from Evil Seed’s arm, but I can’t seem to pose it in a very satisfying way. I wish it was longer or had a wire in it or something. As it is it’s just tough to make it look right.

Thanks to his minimal gear Evil Seed is much more posable than many of the other figures from the line. His hips and shoulders move quite freely. He’s missing the calf swivels that most of these guys have, but I don’t find those to be all that necessary anyway. Ankle rockers are much more important to me. Granted, he doesn’t have those either, but he’s still good.

While I’m not crazy about them, I do appreciate the included accessories and they give the figure something to interact with. He can hold both and they look fine “in action”.

His mouth is a mess and his accessories are weak, but I love this guy. Sure – just like every other figure in this line since 2012 he’s crazily overpriced, but as someone that’s locked into the subscriptions I appreciate Evil Seed and am happy that he’s on my shelf.

So far the 200X subscription has been killing it, producing some of the best figures of the entire Classics line. If the 2002 cartoon isn’t your thing I can understand passing on these guys, but otherwise they’re great figures.