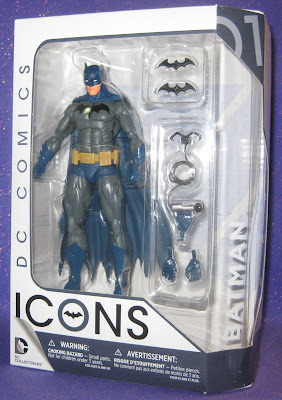 Apologies, Needless Things readers – I had said that the reviews of the Deadman and Batman Icons figures would be up last week. I got struck down by a horrendous Virus From Outer Space that resulted in my not giving much of an eff about anything. So now I’m catching up.

I can hear you now – “Oh, great. Another Batman action figure. Let me guess – it has a cape and fists?”

Let me assure you that for several reasons this Batman figure is unlike any other you might own. Probably.

This one is from DC Collectibles’ new Icons line. It was designed by Iven Reis and is based upon his (Batman’s, not Ivan Reis’) appearance in the “Last Rites” storyline, one of the last before the Caped Crusader was robbed of his trunks by the New 52. Between the packaging layout, the obvious (but not too obvious) articulation, and the accessories this figure seems slightly like something you’d find at an import store and I think that DCC took a lot of inspiration for this line from Japanese products.

I bought it because I collect different Batman figures just because they’re Batman and also because this is a new toy line and I couldn’t help myself.

The last time I remember liking a Batman figure this much at first sight was when I saw Mattel’s first DC Superheroes Batman – the one with the good paint job. When I picture Batman in my head, these are the types of Batmans I see.

Did you read my review of Deadman? Same deal.

One of my favorite things about DC Collectibles – creator credits.

This is one of the most unique and distinctive Batman head sculpts I’ve seen. To a certain extent, all Batman heads look the same. They tend to be long and narrow and severe. This one manages to not only look like an actual person’s head, but the cowl is designed in such a way as to suggest support or even a helmet underneath. Most Batman figures have been designed just to look a certain way, but many aspects of this one make the costume seem slightly more functional and I appreciate the thought that went into that. The shapes of the eyes on this one are also more interesting on this figure. They look less like slits and more like people eyes – not just the shape but the placement and depth. Now that I think about it, this cowl reminds me a lot of Captain America’s helmet/cowl, and that’s cool.

The ears are shorter – which I have come to prefer over the last decade or so. They’re also sharp, so be careful when moving the head because like Tito’s old lady, they will stab you. There are black eyebrows painted on the mask. They look a bit odd in pictures, but are great when you take in the figure as a whole. The paint is immaculate – Bruce’s nose is even painted up under the mask. Not even a super zoom-in reveals any flaws here, and that’s unusual.

Photography did reveal a couple of weird brown spots on the torso. I couldn’t – and still don’t – notice them when just looking at the figure. They almost look like spots of mold (but aren’t – I hope). I haven’t tried cleaning them off yet. Otherwise the paint on the rest of the figure is clean and nigh unto perfect. I really dig the dark blue and dark grey they used and the yellow of the utility belt looks fantastic. The Bat Symbol is positioned perfectly and the edges are unbelievably clean.

The body sculpt is muscular and chiseled without seeming too lean. The joints are worked into the sculpt beautifully. Even the lower abdominal pivot that I had feared would be an eyesore blends in nicely. The costume doesn’t have a bunch of seams or armor plates sculpted into it. While I like those things sometimes, it is nice to see an old-school suit where the joints look good without needing camouflage.

The cape is a light and pliable material that works about as well as could be expected with the figure’s movement without being fabric. It’s sculpted in a relatively neutral pose, but isn’t hanging straight down, which tends to look awkward. It is sculpted all the way up under the cowl to avoid an unsightly line under the neck.

The Bat boots are glossy blue and look amazing. There is a swivel joint at the top where they meet the leg, so they have a lot more definition than we’re used to seeing. There are some sculpted creases and the soles are defined. In person they look great, but I’ll admit that in the photos they look like they could use some paint. Thinking about it, though, I think that would mess up the look of the figure. Proportionally this is a more realistic Dark Knight, but visually it isn’t meant to be “gritty”. I like the minimal but effective color scheme.

The gloves have the same glossy look as the boots. The scalloped ridges aren’t just angled – they have very specific shapes to them. The sculpt at the edges of the gloves is so defined you’d think there were swivel joints there, but there aren’t. The wrist swivels cover that.

The utility belt is awesome. I prefer the big buckle and pouches to the capsules, and these pouches have a depth and size that seems practical. Batman’s trunks are a bit longer than I’m used to seeing. It’s a little weird at first, but in a way it gives them a different functionality and separates the Caped Crusader from Superman, whose figure in this line has the more traditionally shaped briefs.

Side Note: No – I do not know what, exactly, that functionality might be. Maybe providing extra warmth for Mr. Wayne’s loins on those cold Gotham nights.

Batman comes with a pair of extra hands, two Batarangs, and a line launcher.

The extra hands are posed for gripping and switch out easily. I was nervous for the first few swaps given the tiny pegs, but they held up just fine and switching became easier the more I did it.

The Batarangs are very simple. They don’t have any sculpted detail. But the shape and edges look great and they fit perfectly into the gripping hands.

The line launcher circumvents any sort of support issues or problems the figure might have holding it by having a hand sculpted right onto it. There is a string – a nice one – that runs through the device and has a ball at one end and a grappling hook at the other. The device and attached hand slide along the string nicely.

It’s fun, but the string could have been longer. And with the way the ends are attached, there’s no switching out for a different one.

I like that DCC chose something other than the standard grapnel gun. Not only is it a refreshing change of accessory, it creates a play element that I didn’t expect from this line.

If not for Mezco’s One:12 Collective Batman, this one would have blown my mind. As is, this guy is still incredibly impressive given the price point. I mean, we’re looking at twenty-five-ish bucks versus sixty-five (not that you can find one for that anymore). Here’s the articulation rundown since this is a new line:

From my review of the Icons Deadman:

Batman’s head moves around a bit more than Deadman’s, but still not as much as I’d like. As I said in the other review, I hope that Superman or any other flying characters have a hinge on the neck peg.

Batman’s shoulders are better. This figure’s arms can hang naturally by its sides and achieve just about any Bat-pose you might want to see.

The hip articulation is pretty basic, but works better than I thought it would from the first glance. You won’t be getting any deep squats out of these figures, but that seems to be the biggest limitation of any action figure line in this scale.

The abdominal joints work very well together and allow for a good range of poses.

With all of the articulation and accessories, this figure is a ton of fun and will likely be hanging out on my desk for a while. And I can’t even tell you how relieved I am at the figure being so sturdy.

This is an excellent Batman action figure. As far as I’m concerned it’s a must-have. I would love to see a Jim Aparo version in this style (or in DCC’s Designer line, even).

As I sat and reviewed this figure I was blown away by how clean and precise everything is and by how much error and sloppiness I have accepted from other action figure lines over the years. The Icons line isn’t cheap, but it damn sure is worth it. It’s going to be very hard for me to resist buying any character I have even a passing fondness for.