The Good, The Bad, And The Jessica Jones 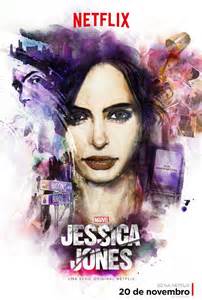 When Netflix announced their deal with Marvel a few years ago, it was pretty exciting. I am what is known as a cable cutter, which means I cut ties with the cable/satellite companies and have gone rouge. I now pay thirty dollars a month for my television watching which includes the WWE Network, Hulu, and Netflix. I pay for exactly what I want and not a billion channels that I don't. Sure I miss the good old days every now and then but I'm much happier than when I paid a hundred and fifty bucks a month for a lot of stuff I didn't want.

The four shows included with the Netflix deal were Daredevil, Luke Cage, Iron Fist, and Jessica Jones. Of course I am familiar with Daredevil and I am one of the few that actually likes the Affleck movie. Sure it gets panned a lot but I saw it twice on opening weekend. I've tried watching Daredevil but always get stuck on the second episode. Either I get bored or fall asleep, I just haven't made it past that episode. I'm going to keep trying because I know its a good show and I like the cast very much. It also doesn't hurt that the Punisher is announced for season two so that excites me a little.

So when Jessica Jones was announced, I wasn't too excited but I knew it was something I wanted to give a chance. Boy, am I glad I did. What a risk Marvel took with this unknown character wrapped in adult themes and nailed it out of the ballpark. Not every show is perfect so lets break down the first season of this Netflix original.

Dialogue: I simply love every word that is spoken in this series. Its smart and has meaning no matter who says it. Sometimes the delivery isn't right so it comes off weird or whiny but I don't think its the fault of the words. It's a show that combines humor with tragedy and good old fashioned crime drama that picks all the right words.

Luke Cage: So I knew that he was getting his own show but I had no idea he would play such a big part of this one. I am not familiar with the character much but I love the portrayal of him in this live action role. The actor shows range by not always being down, depressed or beaten even though he has every reason to be. I'm glad they did wait on revealing that Jessica was the one who indeed killed his wife. It could have gotten too weird and may have went too far for us to believe he could forgive her. Mind controlled or not it was her responsibility to be honest with him. His appearance in Jessica Jones just makes me excited for his show so I'm sure that was mission accomplished for Netflix.

Kilgrave: I am not a whovian as the kids these days say so I am very unfamiliar with David Tennant's work. I can't imagine him being any better than what he is in this show. His delivery is chilling as the shows villain with expertly given words by the writers. This character is a perfect example of how not showing something can be even worse than showing the gruesome violence happens. Kilgrave is such a calm, cool, and collected character that counters good with the manic good guy of Jessica herself. He is hands down the coolest villain Marvel has created in their live action except for maybe Loki.

Adult Programming: It was nice to see a Marvel product drop its guard and give us a solid adult drama that doesn’t rely too heavy on the superhero aspect but still providing it. There is almost nothing in this show that is okay for a kid to see. The sex, drugs, and language are all on par with a R rated movie. Since the show is on Netflix, there are no limits for the show and can pretty much go where they want. Its just nice to see a serious take that still gives us superhero nerds something to grab a hold of.

Cast: I know I have picked two cast members already but I feel that the entire cast must be mentioned. From Jessica Jones to Trish to Malcolm to a handful of regulars that don't have a tremendous amount of screen time. Everyone nails their character and perfects them for better or worse. The characters definitely feel real and a part of the world that has been created. There are barely any throwaway characters which surprised me a little bit with a show that more and more characters show up on.

Nods To The Universe: This is something that fans so badly want from the DC universe. The characters are aware of other things that have happened from other Marvel live action properties. The biggest one that happens in Jessica Jones is the appearance of Rosario Dawson's character from Daredevil. Right at the end of the season we get her when Jones goes to the Hospital with Cage. I am not totally shocked but I was surprised at the screen time and importance she gave to the story. Her character showing up did get me excited that Daredevil might show up but when he didn't I wasn't too surprised. Maybe next season.

Too Many Episodes: As much as I love this show I feel it went a little long. Ten episodes would have probably been better and tighter for storyline purposes. By the time the thirteenth episode came around I felt it was very anti-climatic. Maybe it was the fact that Kilgrave was basically the only villain in the story and focused too much on him. Also, the many escapes of Kilgrave had me rolling my eyes at how stupid some of these people were. I almost felt like their stupidity justified the means.

Mind Control: Mind control is a hard power to write with a villain like Kilgrave. It can get redundant very quickly and for me it kind of did. I didn't feel sorry for these people the way I should have. There were so many chances for Jones to take care of Kilgrave and she always passed. See Below.

Hope: I liked the character of Hope. Her arc with her parents was great and the end of that episode was an "oh crap" kind of moment. But then you basically get a handful of deaths of people Jessica Jones cared about and didn't deserve to die all because Jones wanted to save Hope from a lifetime in prison. I get it, but doesn't it seem stupid to trade innocent lives for one that isn't even getting a death penalty. I know it might be a minor complaint but boy did this bug me. And then, Hope kills herself without Kilgrave's mind control.

Jessica Jones: I know it seems weird to have the main character in the list of bad but I just couldn't help it. Krysten Ritter does a great acting job but I feel the writing for her character got extra whiny and annoying. It's not the fault of Ritter and could have been due to too many episodes. By the time that last episode gets around, I was rolling my eyes at some of the paths it takes. There wasn't much surprise or suspense. This was surprising since the whole show was built on that I felt. The last episode felt weak. If anyone at all thought Jones was under Kilgrave's mind control then I'd be surprised. And I just can't think that Kilgrave would have fell for her somewhat terrible acting job on being mind controlled.

Verdict:
All in all, I applaud Netflix and Marvel coming together to bring us this comic character that I or thousand of other comic book geeks had even heard of. It will be interesting to see who is the villain for season two. My guess is that the Will character will turn into the bad guy Nuke, even more than he did in the first season. Also, we will probably find out more about IGH and maybe have a corporation as the baddie. Either way I will definitely be waiting and watching for season two. Who knows, now maybe Ill give old Daredevil another looksy and see if I can make it through the second episode. Baby steps, my friends, baby steps.