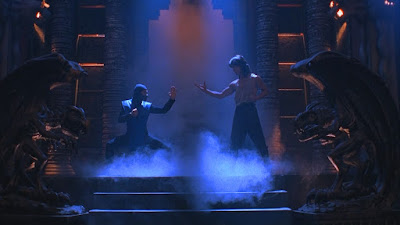 I’ve been busting my balls (so what if I’m a chick.  I’ve got more balls than most men, thank you) the past year on a book that I’m quite proud of.  It’s a non-fiction project in the martial arts genre tentatively titled “Finding Your Way: A Guide To Your Path In The Martial Arts.”  It’s a short guide of sorts to help people in the way of finding the right school/style/Instructor for them, knowing what to look for in your contracts as well as school set-ups and safety, knowing what is expected of them as a student and of the Instructor, sparring and daily practice tips, etc.  I hope to see this published by this time next year, fingers crossed.  In the spirit of a martial arts book, I thought I would throw pop culture and the martial arts together and talk about the wonderful world of martial arts in the movies.  Let’s talk about fight choreography, shall we?


I’m the first to admit that I am the first in line at any action movie.  As you’ve probably read from my previous posts here, I’m as non-feminine as they come.  I once told a co-worker that my idea of a romantic date night out with my husband was when he took me to see “Expendables” at the theater instead of a chick flick.  Fighting, explosions, and lots of guns.  That totally got him lucky when he got home.  The thing about action/martial arts movies or television is that there is a fine line between believable fights and Hollywood theatrics.  Plus, you have to take into account the safety measures, training, the context of the scene (is the person supposed to look extensively trained or not,) etc.  I’m not a professional stunt choreographer so I can’t weigh in on how it looks and operates from their side of the world.  I can, however, at least offer my side of the coin and hope that it gives some insight from a martial artists’ perspective.  And hopefully doesn’t step on any choreographer’s toes in the process.

This will be a multi-part piece.  Part 1 will discuss the difference in professionally trained actors verses set-trained, and spotting the differences. And instead of photos, this post will only be appropriately stimulating with hearty violent videos!  Enjoy, my friends!

Fight scenes are pretty.  I’m sorry, but they just are.  They’re violent and jaw dropping and if rated R, can be gruesome as well.  But as someone who wanted to be nothing but a fighter since she was two, they are downright adorable.  Some girls wanted tutus, what can I say?  I live for watching fight scenes and trying to figure out who walked on to set with prior training and who didn’t.  I went through several season of Burn Notice without realizing that Jeffery Donovan was a martial artist until Season 3 Episode 6, “The Hunter.”   He’s in the swamp fighting and BAM…I see this perfect spinning side sick.  I shot up off the couch and rewound Netflix, then paused it.  As I looked at the paused scene I smiled, pointed to my husband who was at his computer, looking at me with a knowing grin.  He knew me well enough to know what I was doing.  I was analyzing Donovan’s form to see if he was the real deal.  So he pulled up IMDB to confirm that yes, he had studied the martial arts for many years, Brazilian Jujitsu being one styled confirmed that he studies.  This was, needless to say, training he possessed many years prior to Burn Notice.  I enjoy doing this and I can’t tell you if it’s a martial artist thing or a “me” thing, but I like playing “guess the training.”  But what I like even more, is being stumped.  Christian Kane is one of few people that has ever stumped me, for example.  Watching Leverage is a treat for me; it’s one of my favorite shows and Eliot is my favorite character.  While one can tell by his kicks that martial arts training is more than likely not his forte’, it does leave me wondering if some form of boxing wasn’t part of his life previous expertise…especially when you watch the shadowboxing scene in “The Tap Out Job” just before Eliot and Sophie start talking.  Despite the shadowing, that’s Christian in the ring.  And look at the foot work, especially the shifting and stance changes.  That’s hard to teach in temporary fight choreography in a matter of a few days to weeks/months.  Much like Jeffery Donovan’s form on the kick that I saw in Burn Notice, some things are ingrained into a person after years and years of training.  It’s habit and it’s honed.  Yet the Leverage fight scenes are so cleverly edited that it’s impossible for me to give a definitive ya or nay on Christian.  And no bios online have much detailed information to confirm it either.

I mention this because of the difference in those that are trained verses those that are not and the sheer volume of time involved in prepping them for their roles.  If Christian has had no fight training prior to his role as Eliot than I am amazingly impressed; you couldn’t possibly tell the difference.  My favorite weapon that I train with is the Sai and despite the fact that the Daredevil movie is the Marvel equivalent of Voldemort (Movie That Must Not Be Named,) I could watch Elektra’s Sai training montage repeatedly because Jennifer Garner nailed it.  She trained with Sai for months before that movie and it showed that she worked her butt off.  I cringe when she’s holding them still for pose shots because she holds them completely wrong and will one day get her fingers cut off, but her execution, form, and ability to change from offensive to defensive positions with them are spot on.  That’s impressive for roughly eight months of training.


The visualization of the technique- be it hand to hand or weaponry- is less effortless on screen if the actor has had prior training, but this should go without saying.  If you have worked with guns most of your life and spent most of your life at a range, or better yet, were a cop or a soldier before you were an actor, you will feel and look natural holding a gun.  Tatum was a stripper before he was an actor, for goodness sakes.  You think Magic Mike was a stretch for him?  I doubt it.  But if you have never held a gun a day in your life or never even danced in front of your mirror let alone in front of a crowd, months of work are going to go into getting you ready. You have to look like you have been doing this all of your life.  You have to look as natural as the actors that have in fact been doing this all of their life, just like the characters that they play.  The subtle nuances of form, being too stiff in blocks/movement/attacks, lack of flexibility, ki-ah (yell) that comes from the throat rather than the diaphragm, constant blinking/flinching when a strike comes at them, are tells that come off of some people that have had training for a role rather than a lifetime of it.  Those that have lived in my world?  That doesn’t happen as often.  It doesn’t make us better or worse, mind you; I’m not saying that in the slightest.  It just means that long time martial artists/fighters have had more time devoted to their training; we have bypassed these tells due to length of time devoted to knowing how to do so.  A few weeks to months of preparation might not be enough for one person to shake those, but yet they might be enough for another.  The martial arts trainer that prepped Hilary Swank for The Next Karate Kid was so impressed with how quickly she adapted to technique that he felt she could be ready for the tournament circuit with another year of training.  So you see, each person can be different.

Half the fun of a good fight scene is trying to decipher how much is clever editing and effects and how much is either good choreography and set training, or professional training that the actor already had.  It sometimes can take a trained eye to spot the difference, and even then they can sometimes be so good at adapting to short-term on-set training or the movie/episode so well edited that it makes it hard to spot the difference.  I LOVE those challenges.  The next time you watch a movie or TV show, sit down and pick apart the fight scene.  See if you can guess who had the training before shooting and who didn’t.  Then look em’ up and see if you’re right.

Stay tuned for part two, where I talk about the differences in believable action sequences in the Hollywood fight scenes verses the reality of real-world fights.