One Heck Of A Year: Christina's 2015 Year-End Review 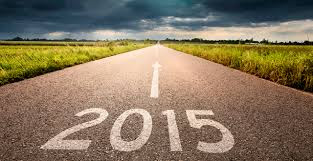 Writing!  Arrows!  Speeders!  Martial Artist!  Cosplayers!  Tabletop Games!  Geek & Sundry galore!  Hunters and the Mark of Cain!  No, this is not me singing my own version of “My Favorite Things.” Although I could.  Badly.  These are but a few of the things that made up the highlights of a nerdy, busy, sweaty, fast-paced 2015.  Everyone has their whirlwind stories about what made it great for them and what made it not so great.  The highs and the lows, the shockers and the “Well I saw that coming” moments.  Here is a look at the things that made a tough year manageable for little old me.

I’m a “Conner.”  A “Con-Goer.”  A “Con- noisseur.”  Insert appropriate Con related pun here, and it’s me.   It’s my stress breaker therapy for the year.  For me these conventions include conferences like writers conferences as well.  For a writer they’re just like DragonCon: a place for you to meet with those that are as crazy as you are to discuss your lunacy.  My highlights for the “Con-Circuit” this year were the Authors Combat Academy writers conference and of course, our beloved DragonCon.  The ACA kicked off its first year in Nashville in April.  I was hipped to it by author Sherrilyn Kenyon’s update about it as she was one of the panelists, and the more I looked into it the more interested I became.  Writing…fighting…two of my constant and favorite things.  Sold!  Panel after panel on writing science fiction, proper police procedures to write accurate police/S.W.A.T scenes, medieval weaponry exhibitions, martial arts demonstrations, and panel hours lovingly referred to as “Rent-A-Ninja” where we could “rent out” martial artists for an hour long block to help us block out fight scenes in current projects to work out details and believability.  Dinners and breakfasts that were stellar, prize giveaways that were as hilarious in how they were drawn as the awesomeness of what was given (“Who has even been in a fight?  With more than one person?  Who drew blood in said fight?  Each of you get this gift!”  Priceless.)  It left me more inspired to write than I have been in years and forced me out of my fear of launching the career I always wanted.  I now have my manuscript ready and my proposal for it freshly polished and shined, and I can definitely say that I owe it to the ACA and the many contacts that I have made there.
One of the panelists at the ACA this year happens to be a regular on the DragonCon Writer’s track, which is a perfect segue for me into my second Con highlight.  DC 15’ was a year unlike any other for me.  My highlights post for DragonCon covers the major details, but so many firsts occurred for me this year.  First year volunteering in the DC Store (though not first year volunteering,) first year doing major celebrity panels (We frequented all the Doctor Who, Arrow, and Supernatural panels the hubby and I could get to,) first time in the new building of the America’s Mart (and it was huge!)…first time I never set foot in the Westin during the entire convention as no panel seemed to take me there…just so many firsts to choose from.  It was kind of a second honeymoon for my husband and I so we got to travel around aimlessly, plan or not plan, play Magic or not play Magic…the Con was ours, baby.  It was a week of freedom I will never forget.
I lie to myself if I say I’m not a TV person.  I don’t binge watch all day; I DO have a life.  But I do have shows that, when the kids are asleep, I will watch one or two episodes of every couple of nights with my husband.  Granted, it put us way behind on our shows not keep up regularly, but hey…DVD and Netflix.  We’re not creatures of habit.  A longstanding favorite (as you should guess if you saw my first piece here at Needless Things) is Supernatural.  And let me tell you…as Season 10 came to a close at the beginning of this year, my want to hug a fictional character increased with a major +10 bonus.  This was by far and away Dean Winchester’s best Season in eleven years of the show so far (at least in this writer’s humble opinion,) to rival Sam’s lost wandering of Season 2.  I was left with the biggest natural high as I followed them through dealing with Dean’s…well…not possession so much as “transformation,” the curse of the Mark, the attempts at removing it, the stain it left on the elder Winchester, and the circles the entire mess ran the boys around and through with their many attempts at solving not just the big problem, but all the minor ones that were thrown at them along the way.  And Charlie.  Oh by all things scared…Charlie...
*sniffle.* 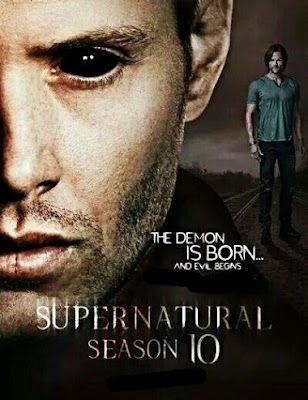 If Supernatural were in the Marvel or DC ‘verse I could group them in these next paragraphs, but sadly they are not.  I admit that I, at first, gave Arrow only ten minutes of my time; it didn’t hold my attention.  But in retrospect I think I realize why; I didn’t like looking at a short haired me with a penis running around a fake city.  Put him and Piper from Charmed in the same body…yeah, it’s sad, but watching is therapy I suppose.  I think I was projecting a bit by ignoring that.  Breaking away from that I decided to give the show a shot and I’m glad that I did.  I nail bite through the MANY scenes that make me realize it’s way too close to home in terms of my personality and our similarities in the PTSD department, but then I get down to the storyline itself and find that it’s a good thing I gave the show a second chance.  Ollie was always my favorite DC character even as a kid; this show keeps that belief in him alive and well for me and, dare I say it, even stronger.  Season 3 came to a close at the start of the year and was by far and away the most intense for me so far.  The best one word description:  rollercoaster.  Emotionally, physically, everything spiraled out of control for everyone in both the good and the bad.  The only thing that didn’t shock me was Felicity and Oliver.  Even though the scene was staged for the benefit of Slade in Season 2, when they kissed I said out loud (before knowing it was faked,) “That happened a bit sooner than I knew it would.”  Some things are just predictable…especially when you are also with a techno geek who is mouthy and always the one person brave enough to be your voice of reason and force you to look at yourself when you don’t want to.  Did I mention watching this show is therapy? 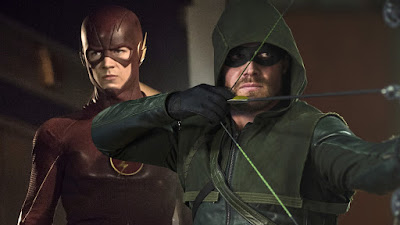 You can’t mention Arrow without The Flash.  If you can, then I worry about you.  You are not a true geek or DC dedicate!  SHUN the non-believer!  Ahem…moving on.  The crossovers are epic; my husband and I have found a website that lists the watch order between Flash/Arrow so you can follow in the story-line exactly and not get lost when certain things happen and cross between Starling/Central city.  Go to Geekritique to find the list.  It helps.  That being said, the show itself is a lighter contrast to the darker elements of Arrow.  Barry is a younger and lighter superhero (and not just on his feet,) so you get a bit of much needed humor and light-heartedness when you switch over to a Flash episode from time to time.  You still, however, get an action packed and emotional hour.  You can help but get involved in certain character’s lives.  The most amazing thing to me was how until the end of Season 1 I could not for the life of me determine what to make of Dr. Wells.  My husband and I can normally peg em’ from minute one, but he kept bouncing from horrible atrocity to altruistic life saving moment.  It was dizzying and confusing and I loved him for it.  It keeps you wanting to know what is going on for more than just the MHOTW (Meta Human of The Week) episodes, which is key for any show.  It has a story with characters that have sub-stories, and if they don’t tie in with each other, they will eventually.  Like Supernatural, that is what makes for a good show; the building of a quality world with quality people in it. 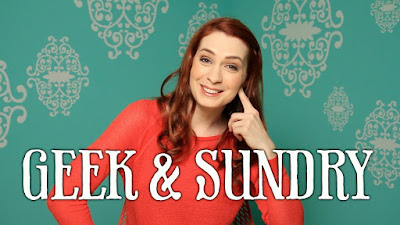 If you have found out anything about me from my pieces here, it’s that I’m a gamer.  My game reviews I am particularly proud of.  So while I always knew about Felicia Day’s Geek & Sundry company I never checked out the YouTube channel.  I feel ashamed.  Now that I have discovered it I cannot let go.  For gamers this place is a dungeon’s treasure room of awesome.  The +10 ring of Amazing.  The DM consenting to your ridiculous request of a Chromatic/Gem Dragon hybrid crossbreeding!  You get my point.  The Tabletop channel is where my family found half of our new board games this year; here you can watch Wil Wheaton and friends play various board games you never knew existed and will LOVE.  Co-Optitude is another favorite, where Felicia and her brother Ryon play retro and Indie games for our amusement.  Those are just two of the MANY channels on the Geek & Sundry station, people.  Giving in to watching this the videos here this year was the best decision I ever made.  Go to YouTube IMMEDIATELY and look it up.  Now.  Go.  Stop reading my crap and go watch you moron!
Well there you have it.  From writing to fighting, from DC superheroes to geek gaming…my year has been full.  These are the things that have helped a stressful year be less stressful and I have ate a bellyful of all of them.  A big thank you to each listed for helping me through a tough 2015 and here’s to having all of them around again in 2016 as well.  I hope you check them out too, guys.  May the Geek be with you.