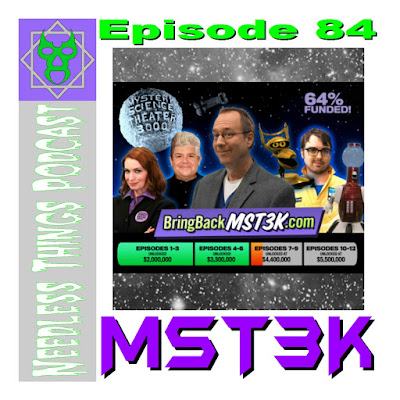 Phantom Troublemaker talks to Chad J. Shonk (writer of Dakota Sky and the novel Proxy) and Beth V. about the history of Mystery Science Theater 3000 and the Kickstarter campaign that is currently underway to revive the much-beloved series.

Mystery Science Theater 3000 is one of those lightning in a bottle type ideas that hit at just the right time and struck a chord with a geek community that at that point was still very much a part of the pop culture underground. It has a style and humor that was unlike anything else available and the show left its mark on a whole generation of like-minded individuals. Now the creator – Joel Hodgson – has started a Kickstarter campaign in order to shoot anywhere from three to twelve all-new episodes of MST3K. The project involves new faces and undoubtedly a new outlet, so there’s a lot to discuss.

Listen in as Phantom, Beth, and Chad debate the involvement of celebrities, the integrity of the product, and the overall relevance of the show to a modern audience.

“What Are You, Christmas?” by The Silvers

Posted by Phantom Troublemaker at 6:45:00 PM