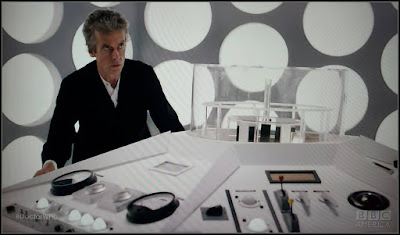 It makes sense, I promise.

I haven’t been truly happy with Doctor Who since May 14, 2011, the air date of Neil Gaiman’s “The Doctor’s Wife”. And immediately after that story I felt sad. Because it occurred to me that I hadn’t been happy with the show for a while.

Looking back at the past few seasons, I realized that the last season that I genuinely enjoyed all the way through was the fifth modern season, which was Matt Smith’s first. I look at that list of episodes and have positive thoughts about all of them. Then I look at the following season and see “The Impossible Astronaut” and my brain sort of goes, “Hurm…”. I’m not going to sit here and get into specifics about every story, because that would take all week, but I can point at the sixth season and see that that’s where my fandom started to falter.

I know that there’s a lot of hate out there for Stephen Moffat and I want to be clear – I don’t hate Stephen Moffat. He’s a dude that has made the choices in life that led to him being the showrunner for Doctor Who. He’s guiding the franchise in the way that he sees fit and has every right to do that. I don’t agree with his vision, but these things happen sometimes. I’m not happy with the show and yes – of course it’s disappointing that I can’t enjoy one of my favorite things right now. But there’s no point in being all pissy about it because that’s how things are and it doesn’t look like they’re going to change anytime soon. I’m into plenty of other stuff, too, so I think I’ll get by.

Having said all of that, I do still have some very strong feelings about what Doctor Who is and has become and I’ll be trying to nail them down today. Just because I don’t obsess about it all of the time doesn’t mean I don’t care. If I wander a bit, I apologize. I haven’t shared these thoughts too much or talked about them with too many others because there are many fans of the franchise that see themselves as some sort of guardians and that get very upset if you express any sort of reservations about the show or don’t appear to be enjoying it as much as they are. I won’t be arrogant and presume to understand the motivations for the behavior of this subset of fandom, I’ll just say that they can be extremely rude and unpleasant and are absolutely part of the reason why I have extracted myself from public discussion of Doctor Who. I’m not going to sit around and be fan-shamed by people that are so insecure that they can’t handle criticism of a television show about a guy that flies around space (and time) in a box righting wrongs. Unlike them, I’m just putting my opinion out there. I don’t need anyone to agree with me. Heck, I don’t want anyone to agree with me. Half the time when I’m talking Doctor Who I’m hoping that someone will present a cogent argument other than, “You’re a bad fan and you should just shut up and like it” and change my mind about something.

I’ve written before about the Doctor becoming a supporting character in his own show. It’s been an insidious process that started way back when Amy Pond was first introduced into the show. While the Doctor still very much drove the narrative, over the course of her first season Amy evolved from being a standard companion into being a focal point of stories.

Technically I suppose you could say that this sort of thing started with the modern era, as far back as Rose. Many narratives centered around her importance, both to the Doctor and to the universe. I have to admit that in retrospect putting so much importance on her is probably what led to the decline that I’m perceiving now. But at the time it wasn’t as apparent because there wasn’t a precedent for it. The closest a companion had come to being so critical had been Ace with the Seventh Doctor.

And yes – the companions have always been important. Obviously. They’re the viewers’ gateway into the show. They put the Doctor into perspective, as well as giving him an excuse to explain all of the weird shit that goes on all of the time. They get their own side stories and always have some development. To a certain point. Never to the detriment of the Doctor, though. While we enjoyed the companions and had our favorites and were invested in them, they were always somewhat interchangeable. There were beats that were character specific, but in most cases they served the narrative, not the other way around.

I liked Rose a lot. I liked Amy and Rory a lot. But looking back now, the treatment of those characters is what brought us to the point we are at today. It’s like how Scream is a great movie, but it ruined the horror genre for years. Now we have a whole new paradigm on Doctor Who where the stories being told rely on everything that has been established about the companion.

I feel like I’ve been watching The Adventures of Clara and Her Friend, The Doctor for the past two seasons. It’s all about Clara’s growth and Clara’s path and Clara’s feelings and how the Doctor relates to them. I get that the idea is we’re seeing the Doctor’s own growth or whatever in relation to Clara’s, but that leads me to another problem I have with modern Doctor Who:

I DO NOT NEED, ONCE (OR MORE) PER EPISODE FOR THE DOCTOR TO PASSIONATELY PROCLAIM “BECAUSE I AM THE DOCTOR AND I ____ ____”.

That shit is fucking corny.

Tom Baker and Jon Pertwee didn’t run around proclaiming who they were and what they were going to do all the time. They just did it. We knew they were the Doctor and we knew they were going to handle shit. And we knew why – because they were the Doctor. That’s it. He’s the guy that fixes things. He does what’s right in the best way that he can. It’s not always to the benefit of all, but he looks out for the little guy. He’s not full of angst and he doesn’t get nauseatingly weepy over things ending because he understands better than any human that all things do end. My Doctor wouldn’t have had a fucking nervous breakdown and imperiled all of reality because one of his companions made a stupid, arrogant decision and got impaled by a magic crow. Did Peter Davison throw himself on the floor and gnash his teeth when Adric went down with the ship?

Okay, well, he did, but he didn’t follow that up by spending four billion years punching a wall instead of using the fucking spade that was right outside.

He got on with things. Because Adric was human and made his choice and humans die and the universe moves on.

The Doctor’s actions regarding Clara make him seem unbalanced and, quite frankly, somewhat pathetic. Maybe that’s the road Moffat is going down? Maybe the Doctor is coming unraveled entirely. He can’t even take action anymore without a pep talk from his companion or some random bystander. Maybe he’s losing everything and we’re seeing his inevitable descent into becoming the Valeyard?

That would be a lot more interesting than what appears to be the case, which is that the powers that be are turning – no, have turned – Doctor Who into just another weepy drama. That the character of the Doctor has been humanized and explored to the point that he is no longer the magical and mysterious strange that well fell in love with way back when. That now we know how he works and why he does to a point where watching him is less a wondrous delight and more an exercise in the familiar.

I think that’s all I’ve got for today. I apologize that there wasn’t a clearer conclusion, but the emotional abscess is drained for now. I’ve got a lot more to say and I’m sure I’ll get back to it soon. I do still plan to write the season overview that this post was supposed to be.

In the meantime, if you’re enjoying Doctor Who, please continue to do so. My feelings shouldn’t have one bit of impact on your fandom. As a matter of fact, if you’re still in love with the show, please go to the Needless Things Amazon Store and buy some loot! We need all the help we can get!

Email ThisBlogThis!Share to TwitterShare to FacebookShare to Pinterest
Labels: doctor who, Sci-Fi, television