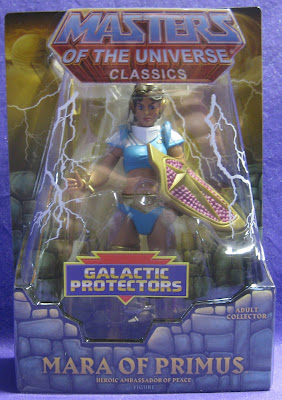 I checked out pretty early on New Adventures of He-Man. I bought a couple of the figures because I was excited about the new designs and articulation, but I don’t know that I even made it through a whole episode of the cartoon.

While it might be my least favorite iteration of the Masters of the Universe franchise, it has produced some of my favorite figures in the Classics line. I feel like sci-fi elements translate very well to the modern line and the 4 Horsemen have done a fantastic job of not just adapting but updating these characters.

Since I don’t have much to say about Mara given that I wasn’t even really aware of her existence until Matty announced her as a figure, I’m going to run down the New Adventures releases thus far (click on the name for my review):

Optikk – For some this guy might seem like an odd choice to kick off New Adventures releases, but to me he was perfect because Optikk is an armored eyeball and I think that’s friggin’ great. He’s a figure that got me excited about some of the stranger and lesser-known characters early on in the line, which was important to Mattel keeping me as a customer in subsequent years.

Icarius – I rated this guy well and he came with a head that looks like Kurt Russell, but in the end he bored me and I sold him. He’s a great sci-fi figure, but on the shelf next to all of the monsters, mutants, and living skeletons of the Classics line, he’s just some blue dude.

Slush Head – What a great weirdo! Bendy tentacles would have been nice, but this is still an awesome figure that I totally would have bought even outside of the context of the Classics line.

Karatti – I hated Karatti at first. I don’t know exactly why. I think part of it was that I was suffering from severe Trap-Jaw leg fatigue, as many Classics subscribers were. Now I like him and I’m glad I didn’t get rid of him.

He-Man – While nothing will ever truly beat the original He-Man design, I think this is the best He-Man figure in the Classics line. Matty did right by us with this one. I can’t dispute the folks that didn’t actually want a New Adventures He-Man, but once you get past his show being terrible this is an awesome figure design packed with tons of accessories.

Hydron – He’s a water guy! Of course I love him! Seriously, though – Matty did a solid job on this guy as well. I was a little burned out on the line at this point, though (or at least on reviewing the line) and didn’t cover Hydron.

Flogg – His weapon looks stupid, but this guy is solid, too. Not my favorite. But he’s okay.

Skeletor – Skeletor is great. I love his head and the incorporation of his cyborg parts. His torso is too thick, but whatever. Lots of these guys have pudgy torsos. I wish they didn’t, but it’s not exactly one of Matty’s greatest sins. Plus, he came with that awesome battle damaged Faker head! Despite the quality of this figure I was still in a slump and didn’t review him.

She-Ra – She-Ra, however, was so good that I had to review her. She’s one of my favorite figures of the entire Classics line.

And that brings us up to date with Mara.

Mara looks like a mix of Buck Rogers and John Carter designs to me. Her clothing is very much like a sexy space suit, but her gear looks like Martian warrior princess stuff. I know a lot of folks aren’t crazy about her, but I really like the combination and find it to be perfect for Masters of the Universe.

Those are some brutal bangs, though. Not as brutal as the ponytail, obviously, but I’ll get to that.

I didn’t bother to read the bio because I’d rather not know how dumb this character actually is. I caught the phrase “Queen of the Mytes” when I glanced at it and don’t want to know any more. In my head she’s basically He-Man’s Dejah Thoris and that’s enough for me.

I’m not a fan of the super long ponytail with the mace at the end, but there’s not much to do about it. It is sectional and I’ll get into that, but I just had to address this thing to start because I don’t love it. As I mentioned above, the bangs are pretty awful too. Mara has terrible hair, so it’s good that the rest of her is so awesome.

The face on mine is great. Some folks got derpy eyes. I didn’t. The paint on my figure is very good. As a matter of fact, the eyes in particular look great. I dig the weird tiara/earmuff/ponytail holder arrangement, too. It almost looks like a thing Frazetta would put on one of his warrior babes.

Mara has the most unique costume of any of the women in this line. Pretty much every other female has some sort of skirt and/or bodysuit thing going on, but Mara has some excellent space gear worthy of StarCrash or Battle Beyond the Stars. Maybe not quite Barbarella. Although now that I’ve said that, I feel very strongly that we need a line of Barbarella action figures. Just not from Mattel. Sorry, Mattel.

Anyway, I dig Mara’s top. It looks like it might be a uniform. The asymmetrical design is cool and the shapes on the shoulders are definitely left over from the 80s. The collar is awesome, too. It’s a turtleneck designed by someone that hates wearing turtlenecks.

Mara’s belt and… uh… trunks… have a new design and look good. They don’t have the diaper-like look of some pieces like this and thankfully Matty finally decided to use Battleground Teela’s legs again. These are so much better than the standard women’s legs in this line. I can deal with slightly less posability if it means we don’t have those ugly joints showing.

All of the armored pieces are cool. The gold and purple looks great. Overall Mara’s palette is something of an eyesore, but to me it’s necessary to get over what her character is. The blue and white portions have that Star Trek look while the armor is straight up Martian Warrior Princess. And the asymmetry present throughout the design is great.

Mara comes with a shield and a sort of pike thing.

The shield is an odd shape and looks pretty cool. The paint is great, it clips onto her arm nicely, and it doesn’t feel like it’s too small like the other women’s shields do.

The pike has a spiked ball on one end (that matches the one at the end of her ponytail) and a blade with “China” stamped on it on the other. As I’ve mentioned before, I hate that “China” stamp and find it utterly unacceptable. Otherwise this is a great weapon that the figure can hold in one or both hands. I dig it.

For the most part you can count on the Classics figures to provide as much articulation as you want. Even minus the thigh and calf swivels, Mara can achieve plenty of poses and can fight like a warrior princess (or whatever). Rocker joints on the ankles are long gone, so I’m not even counting those.

The ponytail has two removable pieces – the bottom portion of the hair and the spiked ball at the end. The whole thing looks kind of odd and stiff and I honestly would have preferred two entirely different ponytails – this one and one that looked more natural and less like something a fourteen-year-old designed. But it is fun that you can switch this one around and is definitely another example of Matty over-delivering.

Mara is great. She has a couple of features that are too 90s to be good, but overall she’s a unique and awesome addition to the Classics line – one of those figures that I never would have asked for but am glad to own.

I can’t honestly say you should seek her out, but if you’re a subscriber I’d imagine you’re happy. Unless you got the derpy eyes.