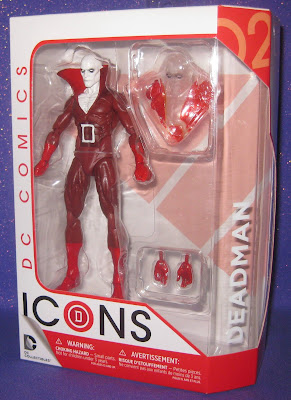 Apologies, Needless Things readers – I had said that the reviews of the Deadman and Batman Icons figures would be up last week. I got struck down by a horrendous Virus From Outer Space that resulted in my not giving much of an eff about anything. So now I’m catching up.

It’s always exciting to review something from an entirely new line, particularly when it’s a character that’s one of my favorites.

Back when DC Collectibles showed off the first figures from this new Icons line – I think it was at this year’s Toy Fair – I said that if I could do it easily that I would get rid of all of my DC Universe Classics figures from Mattel in order to collect these. That was a bold statement considering that I hadn’t even seen one of the Icons in person yet, but the style appealed to me so much that I meant it. While I really do dig the uniform look of Mattel’s Classics, I will never be happy with that style of hip joint and there are just so many little issues throughout the line that bother me every time I look at those shelves.

The concept behind DC Collectibles’ Icons seems to be to create a line of action figures that are properly scaled with uniform aesthetics that can produce the most iconic versions of characters from the massive history of the DC Universe. That’s why we’re seeing a New 52 Black Adam, a Longbow Hunters Green Arrow, and a Batman that still has his trunks.

Longtime DC go-to Ivan Reis designed all of the figures that have been announced thus far, giving the line that uniform look. He was a great choice for this, as his style is very tight and somehow encompasses the very different looks of the many eras being depicted. Today’s Deadman, for example, seems very inspired by Neal Adams’ work while still representing Reis’ own work from Brightest Day.

To me, the most interesting thing about the line is the new scale. DC Collectibles has been using a seven inch scale for most of their lines for years now. The Icons are a noticeably smaller scale – seemingly a true twelfth scale. The proportions are also more human than many of the other superhero lines we’ve seen over the years.

I ordered a Deadman when he was offered because I’ll buy pretty much any Deadman merchandise that gets offered. Boston Brand is one of my favorite secondary (tertiary?) DC characters and I’m always happy to see new stuff with his ghastly face on it.

Speaking of ghastly, most Deadman figures either lean toward horror or superhero aesthetics. Some look like a muscular guy in tights and some are straight-up skeletons. This one finds some nice middle ground. The sculpt and color are definitely a little more grim and dark, but the overall feel is in line with a guy that might be in the Justice League.

Some newly-standardized features of DCC’s packaging are the numbering system and the information-free backs:

I like having some kind of statistics or biographical information on my toys. It’s not a huge deal considering I throw ninety percent of the toy packaging I get in the trash, but I like to have it.

More important, though, are proper credits. DC Collectibles has been providing these for a few years now.

This Boston Brand looks like a dead guy. Er, man. That’s not white paint or a mask. This figure is sculpted with sunken cheeks and eye sockets, with his skull clearly visible under whatever thin flesh remains. The stark white of that flesh is solid and consistent. The black around his eyes is precisely applied and blends out nicely. The figure’s collar seems like the perfect size to me. It isn’t ridiculously tall like a couple of others I have and the sculpt on this one makes it seem a bit more pliable – it has a sense of motion.

The sculpted musculature is fantastic. Deadman is lean and gaunt with a ton of definition. This guy looks like he’s about -10% body fat. The figure sports a ton of articulation and it is all worked into the sculpt about as beautifully as I’ve ever seen. More on that later.

The “D” on the abdomen is sculpted and painted white. The paint is nice and thick, with no red tones peeking through.

Deadman’s boots and gloves are a brighter, glossier red than his costume. They’re just painted on with no sculpted seams at the tops, but I’ll take that over cut joints that don’t line up. I’m glad that DCC didn’t throw in calf swivels just to do it. And I appreciate that they’re picking and choosing what works with the aesthetics of each figure – the Batman from the same wave does have calf swivels, but only because his boots allow for them. That review will be up soon (hopefully).

Scale-wise Deadman is a bit big for the 5” scale Doctor Who figures, too small for DC Universe Classics, and about right for the movie-based Marvel Legends, which are slightly smaller than the comic ones.

It looks like the amount of accessories will vary significantly from figure to figure, and I am fine with that. Spreading them throughout the line and only including things that make sense is fine by me. Also – no stands. Hooray for no stands! Except that I have recently noticed that DCC is selling generic stands separately, so the more cynical me has to wonder about that.

Deadman comes with an extra set of hands and a phasing Deadman piece.

The hands are open and look great. I was super nervous about switching them out, but the pegs seem quite sturdy and once you’ve done it a couple of times it becomes easier. Those pegs are red, so when the bit of paint on them flakes off it doesn’t really matter. I like the sculpted poses on these – I call them “Haunty Hands”.

The “phasing” piece is made of clear rubber with some black and red paint. Deadman’s primary ability is possessing living humans in order to carry out whatever it is he needs to get done. This piece can attach to other figures to simulate that power.

But looks much better on Character Options’ Twelfth Doctor:

This is one of the best articulated figures I have seen at this scale for around this price point. Some of the joints have limitations, but for the most part you get a lot of options out of this guy. Since this is a new line, here’s what you have:

Having said that, there are some minor issues.

The head is just on a ball peg. It swivels just fine, but only has a marginal degree of movement otherwise. This could be better. I would hope that DCC knows they need to put a hinge on characters that fly. This ball peg won’t cut it for Superman.

The shoulders don’t have quite the range I want. They move as far back as I need them to, but oddly can’t be pushed down to hang naturally at the figure’s sides. This always bugs me, and is slightly more annoying on a figure with this lean a physique. There’s just no reason for it.

The hip articulation is pretty basic, but works better than I thought it would from the first glance. Brand won’t be squatting, but he can do lots of other things.

Once you loosen that upper joint up it moves around quite a bit.

With all of the articulation and accessories, this figure is a ton of fun and will likely be hanging out on my desk for a while. And I can’t even tell you how relieved I am at the figure being so sturdy.

A couple of very minor things keep this figure from being perfect, and it might not even be fair of me to criticize them. But this Deadman has essentially raised the bar for twelfth scale figures in the $15 - $25 price range. This is the best figure I own in that category. It is much more aesthetically pleasing than any Marvel Legends, it is sturdier than Funko’s Legacy figures, the articulation is far superior to anything Mattel produced, and it has all the right accessories. Hasbro’s Star Wars Black line probably comes closest, but even those figures have some rubbery parts or paint issues that have them falling short of the excellence of this guy.

I’m not saying that Deadman is a must-have because if you’re not a fan of the character, you certainly don’t need him. But pick yourself out a character you do like (hint: Batman is in this wave, too) from one of these initial waves of DC Icons and see what you think. You owe it to your toy collecting self to experience a great new style of action figure.