Obviously the most famous version is the one from the live action television show, but there have been dozens of different versions of Batman’s signature car since its first appearance in 1939 (when it was just a red car referred to as “the car”).

For whatever reason, the Batmobile hasn’t played a big role in the comics since Grant Morrison introduced the flying version. But over the last couple of years it seems to have hit pop culture in a big way. Or at least, it’s made a big impact in the toy industry. Mattel produced a (sub-par) version of the ’66 Batmobile, and a super-deluxe SDCC Exclusive Arkham Knight Batmobile. They also released a set of Hot Wheels for the 75th Anniversary of Batman, most of which were various Batmobiles. The aforementioned Arkham Knight video game featured the most complete Batmobile experience yet, with not only the game version but also skins for classic Batmobiles like the Tumbler and the 1989 model.

We also got a look at the newest iteration, which will appear in Zack Snyder’s Dawn of Justice: 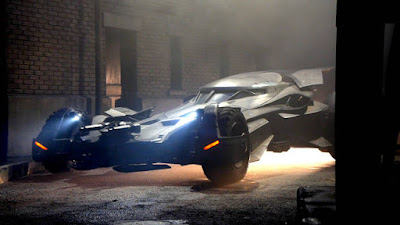 Finally, we got an update to what is not only an iconic Batmobile, but one of the classic toys of many a Gen Xer’s collection - the car seen on Batman: The Animated Series.

I’ve still got the original Kenner version. That thing is a fantastic toy and one of my all-time favorite toy vehicles. Sure - it was undersized, the Bat Symbol sticker on the front always bothered me, and it’s blue instead of black. But it had pop-out saws on the wheels, the design is beautiful, and the ejecting mini-jet was integrated into the design so well that it was undetectable. It’s one of the best toy features I own and is an example of the manufacturer going above and beyond to offer value without mucking up the source design. Sure – I’d love to have been able to fit Robin or Catwoman into that car beside Batman. But I’d rather have a friggin’ jet that shoots out of the back!

Today’s subject has a lot to live up to, and not just a little going against it. The original was a toy, while DC Collectibles’ new Batmobile is more likely to serve as a collectible. That means that the designers were probably more concerned with aesthetics than with gimmickry. While that would have been fine with me years ago, I’ve been softening on toy gimmicks ever since my son was born. That’s not to say that aesthetics aren’t important, but I think there’s a middle ground that can be achieved, and that the finest designers can hit it. Masters of the Universe Classics does that more often than not (although their “nots” are generally pretty bad).

The biggest challenge that this Batmobile faces has nothing to do with the designers. It’s the poor quality control that has plagued this line since its first releases. I want this to be the greatest toy line of all time. I want to love it to the point where I’d be fine if it was the only thing I was collecting (boy, would that be nice). But the figures so far have been comparable to McFarlane releases for their design and durability. We’ve suffered everything from broken limbs to stuck joints to poorly engineered limbs (neither set of Man-Bat’s arms stay on) to the all-new problem of accessories that are missing paint apps (on Batgirl – I’ll be reviewing her soon).

Suffice it to say I was concerned about this thing breaking or falling apart. But it’s a must-have item, so I risked it and put my money down anyway. So here goes…

Massive, sleek, and black. The flat finish looks great. The transparent, blue-tinted canopy is just darned classy. And after the disappointment of Mattel’s ’66 Batmobile the rubber tires and transparent headlights and signals have me absolutely delighted.

The box is very plain, but this thing isn’t exactly going to be showing up at Walmart or even Toys R Us, so it doesn’t need to be eye-catching. It features the same graphical style as the figures in the line with graphics of the Batmobile on each side. I do like the stylized angles they used. 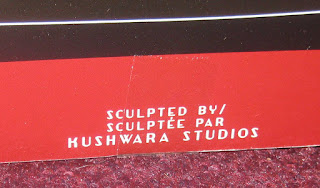 And, of course, the fact that DCC credited the sculptors. 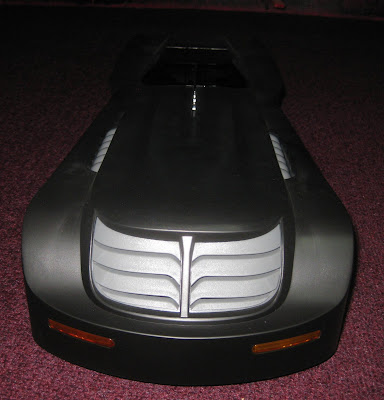 The lines on this thing are beautiful. I realize that’s more the folks that originally designed it than the sculptors, but it just looks so good in person. I tend to think of the Tumbler as being the tank-like Batmobile, but this one looks like a hybrid of a battering ram and a race car. It’s such an effective combination of power and speed. 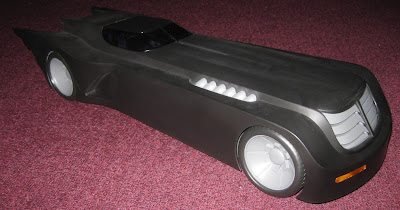 The plastic is very smooth and flat and almost looks like a carbon fiber. It’s perfect for the toy, but there’s some discoloration on the hood that I don’t care for. It’s the way the plastic is and it’s a little hard for me to describe because it’s not technically a flaw, but it shouldn’t look that way. The chassis is very sturdy and just think enough – the thinner parts are still sturdy and don’t feel like they’re in any danger of warping or breaking.

All of the feature pieces – the signals, pipes, turbine, grill, etc. - are snug in their spots and look great. It’s a small thing, but this is a difference between a collector-oriented toy like this one and a mass market release – all of these parts are separate and have this engineered look to them. They’re not just painted on (or worse – stickers) or part of a single larger piece that sits underneath the outer shell. Each is an individually sculpted piece that was paid attention to and crafted to be accurate. And they are all seated in a realistic manner. 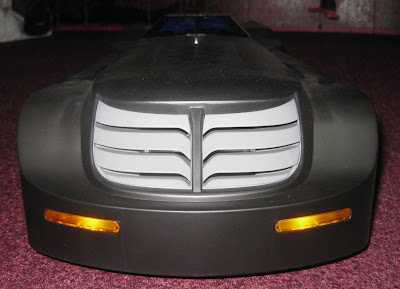 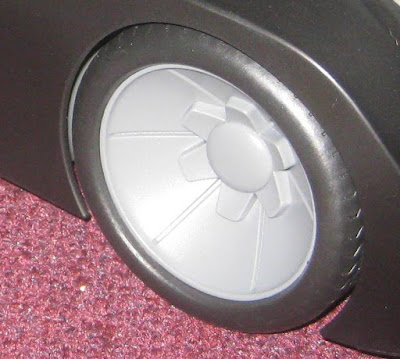 The wheels have the central hub, but it does not extend out into a saw blade like the Kenner version. I feel like that was a missed opportunity, but at the same time it’s not like that happened on the show a lot. It wasn’t a signature of every Batmobile appearance or anything. The rubber tires fit the wheels perfectly and have tread patterns sculpted in. Just the fact that they’re rubber wins this toy a lot of points. 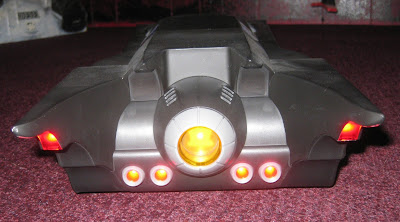 The headlights, signals, and turbine are beautiful. The plastic used is incredibly clear and free of smudges or defects – it might as well be glass. 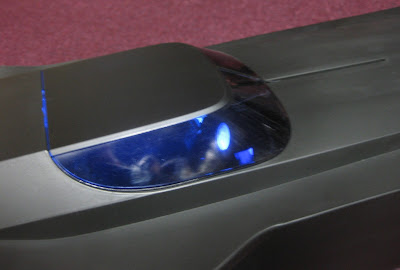 The canopy makes me nervous. It slides open and closed along a low profile slot on the car. It’s more gorgeous translucent plastic and is slightly flexible, which is good because the slider that attaches it to the chassis is so damned thing. Every time I move the canopy I’m afraid it’s going to break. It hasn’t, but I’ve been extremely careful with it and haven’t let my son mess with it at all. When opening it, I place my thumb and forefinger on the rear corners and very carefully slide the top forward. And it does not slide smoothly. To close, I push right at the junction of the canopy and the chassis, putting all of the very slight force I’m using on that joint as centrally as I can. 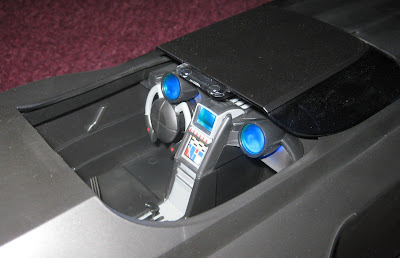 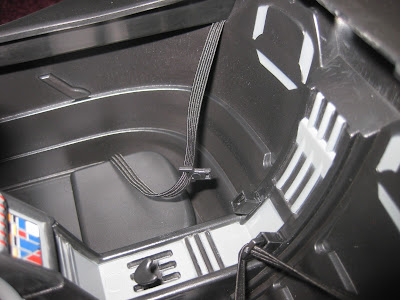 Everything is painted or sculpted – no stickers. 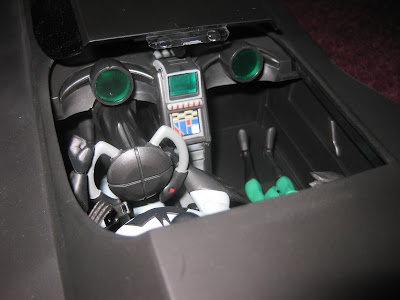 Obviously I did not expect the slide-out jet that the Kenner version had, as that wasn’t even show-accurate. 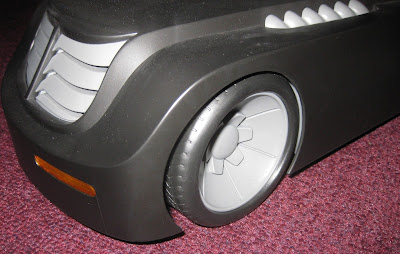 The wheels rotate quite freely – with a gentle push this massive vehicle will go zipping across your floor. The front wheels turn, though they sadly are not controlled by the steering wheel. It’s not really a critical feature, but I always like when cars are engineered that way. At least the wheels do turn. 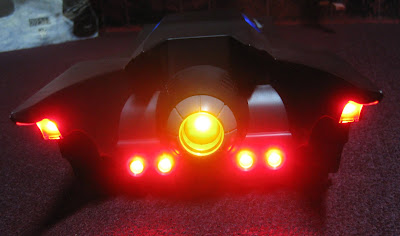 The light-up portions are wonderful. There’s a switch beside the battery compartment to turn them on and off. When they’re on, they are brilliant and clear. I don’t know for sure, but each different colored part is so distinctive that it seems they have their own bulb rather than sharing a single illuminated element like most toys would nowadays.

I would have loved to have some sounds. It’s by no means a deal breaker, but that would have been cool. 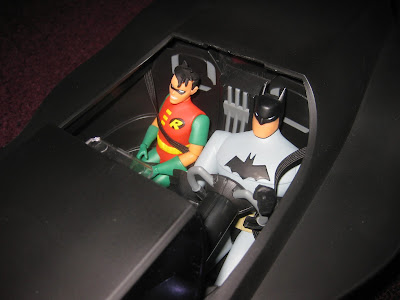 Batman and Robin fit into the cockpit nicely, but if you put two Batman-sized figures in it’s going to be snug. You do have to remove the figure’s capes, which makes them look weird and also it just bugs me that they don’t have their capes on. I’m not saying I would have wanted fabric capes in this line. Maybe some kind of driving cape that was bent halfway down? I don’t know. There’s probably no good answer here. 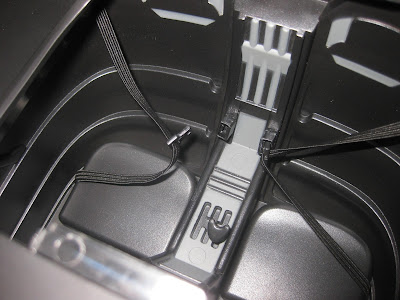 The seatbelts are remarkable. They’re elastic bands with sliding clips on them. These clips plug into slots on the sides of the seats. The concept is good, but the clips don’t fasten securely enough to stay plugged in around Batman’s bulky torso. Robin works fine, but it kept popping out on the Dark Knight’s side. This is sort of a problem, but I also don’t really care. 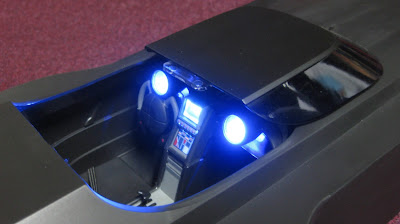 The steering wheel retracts into the dash to make it easier to get the driver in place, which was a brilliant way to do it. It extends out far enough for the driver to hold, which he would be doing if I had bothered to put the correct hands on him. 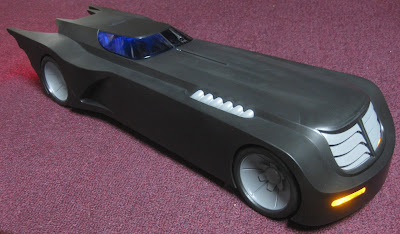 This is a gorgeous, well-made collector toy. I can’t call it high-end because it isn’t, nor is it meant to be. This is the Batmobile we all wanted twenty years ago. It’s like a dream fulfilled. Maybe Hot Toys will make a better, sixth scale version. If they do that’s fine and other folks can pay $600 for that one. I’ll be quite delighted with my less-than-$100 version.

If you’re collecting the Animated line, this is a must-have. If you collect Batmobiles like I do it’s also a must-have. DC Collectibles did a fantastic job in bring this to twelfth scale life. The only major issue is how flimsy the canopy feels, but I’ll reiterate that I’ve been very careful and haven’t had any problems. I’d like sounds and that discoloration on the hood isn’t super, but otherwise this Batmobile is a great toy and an excellent value.

BUY THE EXTRA BATMOBILE THAT I ACCIDENTALLY ENDED UP WITH!