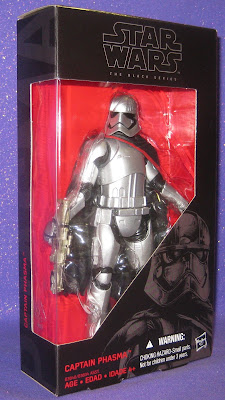 There are many reasons to love Captain Phasma – the design looks like the offspring of a Cylon and RoboCop, it’s an update to the classic Stormtrooper, there’s a cape, Gwendoline Christie is under that armor and also it’s all more than a little disco.

I picked Phasma as one of the characters I wanted to collect early on – pretty much when we saw that first magnificent image from Vanity Fair back in May:

I doubted we’d be getting any kind of vac-metal toys since nobody seems to want to do that anymore, but silver armor was still going to look all kinds of cool.

Of course, all of this was before we had any idea of what kind of toys Hasbro – and everyone else – was going to be releasing. And somehow they all managed to keep it a secret until September. Heck, even now we don’t know what’s happening. I just saw a whole batch of new 3.75” characters on Amazon and I hear there’s a new Slave I with a Boba Fett figure showing up in stores in The Force Awakens packaging.

You guys must’ve read my complaints about the fact that Hasbro has relegated the more articulated 3.75” figure line to being Walmart Exclusives and that on top of that immense indignity they’re also $12.97 apiece, which is obscene. You might’ve also read that I opted out of the 6” Black Series because I at no point in my life will be able to justify paying eight thousand dollars for a Millennium Falcon and a Star Wars line without a Millennium Falcon is no Star Wars line at all.

And no Star Wars line at all is what it seemed like I was going to be left collecting.
But then I remembered that I’ve got a son that doesn’t already have several hundred Star Wars figures in a style that isn’t being mass-produced and that I could just buy all of this new stuff for him. Some of that new stuff has proven a bit harder to find than other, so I am once again compelled to step into my most hated foe – Walmart.

Walmart had the first wave of the Exclusive 3.75” Black Series and they’re pretty much garbage – not how I’d kick off a new line. There’s a Vader with cut joints for elbows, a Chewbacca we’ve seen at least once before, and a Jedi Luke that might be okay but is also not special enough to buy in addition to the Jedi Luke you already have; especially not for thirteen bucks. Supposedly actual Force Awakens characters are on the way, but with these craps clogging pegs I don’t know where Walmart is going to put them. They had a lot of those.

They also had some new 6” Black Series figures – Constable Zuvio, Poe Dameron, and Rey. I hadn’t seen Zuvio in person before (he doesn’t look great) and it made me wonder if there might be a Captain Phasma on the pegs. While I may not be collecting the 6” line, I’ll still buy characters I like such as Boba Fett and Vader.

I looked through the pegged figures and saw no Phasmas. But I’ve been at this toy collecting game for a while, so I didn’t stop there. I moved around some of the shelved stuff and looked behind the vehicles and – sure enough – there was a Phasma stuck behind the Micro Machines, clearly concealed so that someone could return and pick her up later.

TOO BAD FOR YOU, FOOL.

What’s interesting to me is that you can sort of detect some feminine proportions. And also the cape looks awesome. Have we ever had a caped Clone/Stormtrooper?

The Black Series come in nice window boxes that are just shy of being too big for what they are. The window wraps around the side and provides a great view of the figure. The graphics on the box looked classy when these first started coming out, but they’re starting to look kind of cheap to me now. The kid-oriented Force Awakens toys are much more exciting to look at. I get that this sparseness is meant to appeal to “serious adult collectors” and if it does maybe I’m not one of those.

The bio on the back is briefer than brief, which I’m actually okay with. I don’t want to know anything else about Episode VII before I see it. I haven’t even watched that new Japanese trailer yet.

The helmet is awesome. I love this design – it’s evocative of the Stormtrooper headgear, but looks slightly more sinister. The vents or markings or whatever that angle down from the lenses accomplish that. There’s also less detail, giving it a sleeker look. The silver plastic has a metallic look and the black portions are applied perfectly.

Phasma’s distinctive silver armor looks great. There’s something about the design and the portions of the body glove that differentiates this design even more from standard Stormtrooper gear.

The back does have the traditional “O II” marking, as well as the canister on the belt for Corellian whiskey. The belt itself is a separate rubber piece and can be shifted around slightly if you feel the need. The silver paint on the black rubber looks better than you’d think it would.

I like the low profile kneepads and the flexible-looking material around them. The shin guard and boot combo is a little funny. The cut makes it sort of look like Phasma is wearing boots like Lemmy’s. I like it. The soles are a nice black shade that looks slightly different from the body glove. Or maybe that’s just me.

Her arms have cool shoulder pads that overlap the bicep plates and her gauntlets have some kind of gadgetry on the inside. I don’t know if that’s for communications or maps or if plasma (Phasma) blades shoot out of them, but it makes a lot of sense that they’re on the insides of her forearms rather than the outside. The gloves are black with silver plating on the backs and fingers. It looks cool and they’re painted oddly well for 6” action figure hands.
The armor has nice lines, details, and plating in what I’m going to have to assume are the right spots. Again – it’s slightly more involved than regular armor, but also sleeker.

I’m not going to consider the cloak an accessory because I had to remove the figure’s head to get it off and that was a huge pain in the ass. Well, getting it off was no big deal, but getting it back on was a hassle. It taught me that I need to keep a hair dryer in the Phantom Zone.

It’s a very light and flexible plastic that looks good and has a nice, cloth-like texture. The red trim looks great, but unfortunately mine has some splotches on the side. Unless I’m mistaken a little nail polish remover should take care of that. There are also some sort of straps and closures sculpted onto this piece. It all looks good, but I think I would’ve preferred soft goods here. This thing greatly limits the figure’s posability. I can just picture a nicely done fabric cloak. Of course, I can also picture one that’s too thick, doesn’t drape well, and has no detail. So maybe we’re better off.

Phasma comes with a blaster that is very reminiscent of the old standard E-11. It has a fantastically detailed sculpt and some black details on metallic plastic that’s almost gold. It looks great. Phasma can hold it with both hands or one and it plugs securely onto the gimmick on the figure’s right thigh.

I have to mention that the figure feels kind of weak and rubbery. The good news is that since none of the parts are solid plastic, nothing was so brittle that it broke when I was testing the joints, of which there are a ton. They all work nicely and the figure can achieve quite a wide range of poses.

The shoulders are limited by the large armor plates and the hips are restricted by the hanging belt pouches. Otherwise the joints all move freely and are about as useful as you could want. I was quite surprised at the fact that the figure can hold the blaster with two hands in a natural way – this is extremely uncommon for armored figures. Heck, you couldn’t get a buck naked Masters of the Universe Classics figure to hold anything shorter than a spear with two hands.

There’s a gizmo on the right thigh that replaces the standard Stormtrooper holster and that makes the design even more RoboCop-ish. It’s fairly unobtrusive, so I don’t mind it.

Phasma’s blaster plugs into it nicely and stays put well, though the belt pouches come close to making it not work.

The plastic used for this figure honestly feels like garbage, but visually and functionally this is a wonderful figure. If you’re collecting Phasmas or the Black Series it’s a must-have. I’d wager this is the best Phasma we’re likely to get. I mean, aside from Hot Toys’ version.

I don’t often invest time or money in custom pieces for action figures, but I might actually look into a fabric cloak for this one. I’m sure someone somewhere will make that happen.