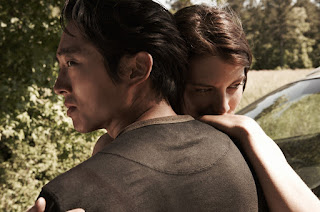 Let's just go ahead and get this out of the way: if you haven't seen the most recent episode of The Walking Dead, and don't like spoilers, you should not read keep reading. Well, don't keep reading now; definitely come back and keep reading once you're caught up. I'm not going to dwell too much on the most recent episode, but I do touch on many recent events. If you haven't read the comics, and/or don't want to know what happens in them you may also want to take a moment before you continue. 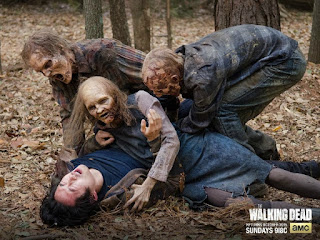 I don't really consider talking about what happens in the comics as spoilers though. This show loves to screw with our expectations, and there are plenty of things that happened in the comics that never happened in the show. Carol should have fed herself to a zombie back at the prison, and Lori and baby Judith were supposed to die during the group's escape. Andrea is a bad ass, and Daryl shouldn't even exist. So just because I talk about something that should have happened or is supposed to happen it doesn't mean anything in terms of the show. I like to think of it more as a reference point or to highlight the differences between the two mediums. Anyway, you've been warned.

Oh, Glenn. Will we ever get closure or is this some kind of mid-mid-season cliffhanger shit? My fellow comic readers will believe that his death was imminent anyway. The fact that comic baddie Negan is heavily rumored to show up by the end of this season doesn't mean that Glenn has to die by his hand (or his baseball bat). In a way it's way more dramatic (if not satisfying) to have Gelnn die without any witnesses. No body, no funeral, just nothing. I also think it's kind of brilliant that we still don't know for certain that he really is dead. Sure it's pissing me off, but the fact that I'm on the edge of my seat about it means that it's good storytelling. As pissed off as everyone was we were all talking about it right? I had to work late last Sunday night, and I stayed off all social media until after I could get home to watch what was really just Morgan becoming a Jedi master. Following that "holy crap!" ending with a 90 minute episode of Morgan turning into David Carradine from Kung Fu was a great mind-fuck, and I was in just as big a rush to get home in time for this week's episode. Still no closure, but I haven't been this eager for pretty much any episode since the first season. And honestly, it was a great episode. It just wasn't what I wanted. I'm sure I'm not alone in my admiration/disappointment. 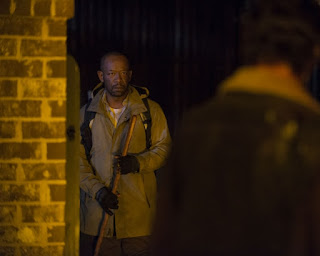 Considering last season was kind of unfulfilling on the death front (I know Beth went out mid-season, and some people no one cared about in the town died later, but none of them meant anything to me) I think they made a great choice by starting this season off thinning the herd (not the herd of zombies, but the herd of useless assholes in Alexandria). Now that a gagillion zombies are at the wall the useless assholes are going to have to step up or continue dying. Either way it'll be good television. Or Morgan can just take all the pussies from Alexandria, fuck off back to that cabin, and start a big ol' pussy commune. Especially the pretend doctor who won't stop whining, and the suspiciously fat woman who's in charge of rationing the food.  As long as the show doesn't follow the cabin pussies I'd be fine with that. Okay, I'd want to see an episode where they all die horribly, but you can hardly blame me for that.

Now if they really want to get people talking and freaking out they should kill off a whole bunch more main characters. Even Rick and Daryl should be fair game. You heard me, Daryl. Sorry to all of you "if Daryl dies we riot" people. What a bold and exciting choice that would be. And it would be some seriously compelling viewing. I could pretty happily let any character go at this point except for Carol. I guess that would make her a good  choice if the writers wanted to fuck with me, but since her possible death has been teased before it would be lame to do it again. Carol had bigger balls than even Rick. The group would get along just fine without him, but they're all screwed without Carol. Instead of Ricktatorship 2: Electric Boogaloo I'd love a Caroltatorship or whatever her rule over them would be called. Given that the world has ended in a zombie apocalypse they're all screwed anyway, but she's kept them alive longer than any of them deserved. She had the beginnings of a child based militia at the prison. She could totally take that to the next level. Cookies and fear will keep those assholes in line. 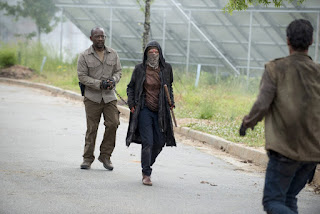 My biggest hope is that they can just keep the momentum this season has going for it so far. I'm tired of the good season/boring season pattern. Season 2 - looking for Sophia. Season 4 - looking for Glenn. It's early going in season 6, but we're on track so far. Don't get me wrong; there were good and bad episodes in every season, but it feels like that's the pattern even if it really wasn't. I mean, the first episode was kind of anti-climatic, but it got good fast after that. I honestly think Glenn is alive, and will be make it home to Maggie. I also think if the writers are smart he'll make it home to Maggie for a tearful reunion (even though they've had one of those already) only for him to die at the end of the season. How much sadder would that be? I kind of thought they'd do it when they reunited in the fourth season, but it would be even better now that they've revealed Maggie's pregnancy. After losing every single member of her family losing Glenn would probably push her over a ledge that would be interesting to watch. And I know it sounds mean, but if she lost the baby too. Holy crap! Or we could just spend the rest of the season watching Deanna figure out just the perfect place to plant that alfalfa. You just never know with this show. I guess that's why we're all still watching.