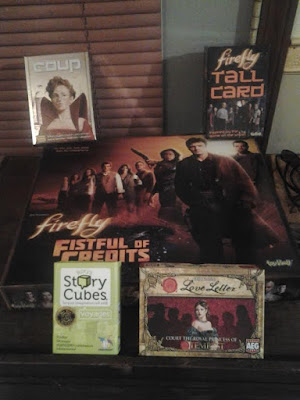 Another year, another birthday.  As one hits adulthood, most find that birthday parties are not as necessary as they once thought.  It isn’t such a big deal to celebrate getting older.  That is, unless you are a geek.  Being a geek means that all that the birthday money you get can be spent on games, comics, Magic cards, collectibles…WEEEEEEEE bring on the party!  On October 4th I passed the threshold of “Young Adult” into the official “Adult’ category, and my birthday was a celebration of geek style in the form of board games and card games galore.  Yup…it’s time for another Geek-In-Game review.


See the picture header?  This is the collection of presents that I received this year.  Oh, I feel loved.  For the purpose of this post I’m concentrating on the card games only.  To make up for the sad face some of you might be feeling over the loss of a Firefly review I shall give you one.  Look at the card games.  See?  There’s still another Firefly game there for me to dive into.  Now don’t you feel better?  It’s called Tall Card, and you should recognize it when you hear it. 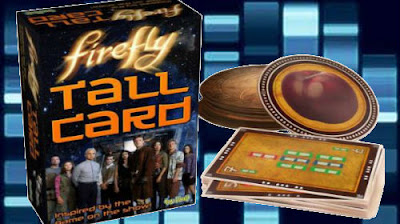 Remember in the Firefly episode “Shindig” when Book, Simon, and Jayne are sitting at the table playing cards for chores, right before River comes in and proceeds to rip labels off of tins in the kitchen?  The game that I got for my birthday is the game that they were playing.  “Tall Card” is the exact copy of the card game from the show created by Toy Vault, the leading company in Firefly related board/card games.  Basically this game is Firefly themed poker, but instead of a wild card you have a tall card.  The catch, however, is that the wild card isn’t wild for everyone.  The wild (tall) card, is laid out after the basic poker rules of dealing cards and your ante in.  Based on what you have in your hand before picking new cards from the dealer, you decide if the card type/suit that was flipped will help make your hand be better/higher than another players.  If you think it will help then you can claim the tall card.  If no one else does, the dealer is stuck with it (much like Simon was in “Shindig” when he said “Dealer claims the tall.”)  If more than one player gets the same hand, you will win if you have the tall card because it automatically makes your hand better.  If we were playing with regular poker cards, for example, and you had a straight flush 1-5, but your opponent had same suit, 6-10, then normally your opponent would win because they had the higher straight.  If you had the tall card for your suit, you would win even though your numbers were lower.  You had the tall (wild) card; it was your ‘ace in the hole.’  See?  And the hands are totally different.  The card suits range from plums, bamboo, swords, red/white/green dragons, etc., and they make the hands vary in creation and form.  Gone is three of a kind; in its place is “Three Pretty Sisters,” or a “Dragon Hootenanny” if you have all Dragons.  Hands known as cratemaker countdown and dancing couple replace some popular poker hands as straight flush and two of a kind, and the game has even created some new hands based on these new cards that were never used before.  The game, however follows the basic five card stud house rules even though the rules do say you can make your own as you go if you want.  As long as you have played poker before, the rest is gravy after you get used to the new types of hands.  It comes with a handy visual chart that breaks the hands down in lowest to highest value and a write up of each hand in the rule book to help.  You’ll be “pokering in the ‘Verse” in no time, baby. 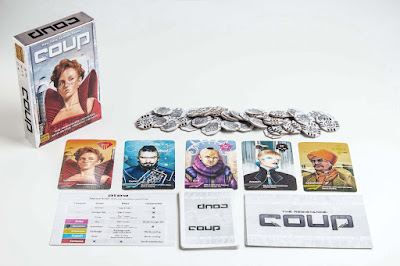 They say that power corrupts and absolute power corrupts absolutely.  In this next game set in a futuristic society this is not only the case, but the number one rule to survival.  “Coup,” created by India Boards & Cards, is a fast paced micro-game with one simple principle:  be the last rich person standing to rule the world by lying and scheming your way to the top.  You have five card types in the deck:  Captain, Ambassador, Contessa, Duke, and Assassin.  Two of each are in the main deck and once shuffled, each player gets two cards handed to them.  Each card has its own ability and counter ability (counter ability is for blocking what another character can do.)  For example, a Duke can take extra money for taxes as his main ability, but when another player wants to take foreign aid from the money pile, the Duke’s counter ability says that he can block that foreign aid, refusing the player money.  You have two people you can be; these are the cards that were drawn for you.  But the name of the game is lies and deception.  You don’t have to be who you say you are.  Your goal is to win at any cost and bluff your way to the top.  If you are exposed as being the person that you truly are, you have to flip your card and show your true self; you then lose that card and have to draw another identity.  Why risk that?  You can be honest, or you can pretend to be another character.  If the player wants to challenge you, deciding they don’t believe you are who you say you are, they can.  The last person standing who has not lost their last card wins.  It brings out the best poker faces in us all, and decides who at your table is really trustworthy or not.  Might not wanna invite the winner over for dinner again… 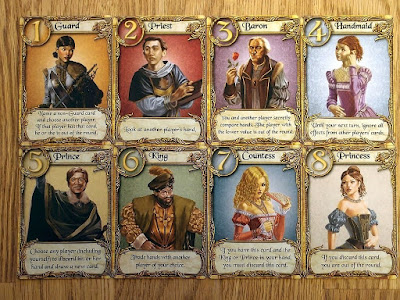 You want to find who wears the best poker face?  Find someone that doesn’t want to admit he’s sweet on a girl.  In “Love Letters” by Alderac Entertainment Group that’s what you have to find out; who is sweet on a girl.  And not just any girl.  The Princess.  Another great micro-game, the storyline follows a Princess who is in mourning for a mother recently arrested for treason.  She has been met with suitors attempting to cheer her up, however she has fallen for one who is repeatedly writing her love letters in secret.  But who in the court is doing so?  There are varying cards- Guards, Baron, King, Prince, Priest, Princess, Handmaiden, etc. - and a varying amount of some.  Each card has different abilities that can be activated when played/discarded.  Some require that you play the card automatically, some require that you switch hands with another player or peek at what they have, and some make you start playing guessing games with other players.  The point is to find out how is who.  As you guess correctly you get a point, designated by a red wooden “Token of affection” from the Princess.  Who is writing love letters to the Princess?  Well let’s see if you can hide your poker face long enough to bluff the others into telling you. 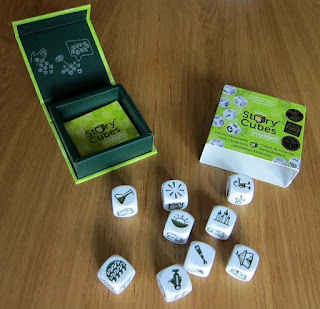 The last game you see isn’t really a poker face game, but for all you writers out there I HIGHLY recommend it.  Story Cubes, from Gamewright, is as simple as they come.  Nine dice with varying pictures on them:  a bowl of rice, a tall man being yelled at by a short man, a light bulb, a submarine, etc.  You pic from story prompt ideas to start a story, dole out the dice to the gamers, and take turns rolling.  Using the images you map out the story that you tell aloud based on the prompt that you gave.  It’s the ultimate writer’s prompt game to clear writer’s block and I see NO REASON that this shouldn’t be used as a panel game at writer conventions or on writer’s tracks everywhere.  We crack up at my house every time we play it


So as it turns out my birthday was all about bluffing, lies, and deception.  And my family supplied the games to bring out these traits.  I have a very dysfunctional group of people that I hang out with as it turns out so while you guys are checking out these awesome games, I’m going to go look up a good therapist…
Posted by C.S at 11:00:00 AM