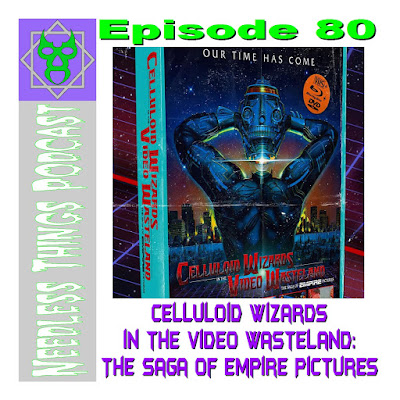 Phantom Troublemaker talks to Daniel Griffith of Ballyhoo Motion Pictures about his newest project, a documentary on Empire Pictures, the revolutionary movie studio that produced such genre classics as Re-Animator, Ghoulies, TerrorVision, Zone Troopers, and many more!


On October 14th, Daniel launched a monstrous Kickstarter Campaign to complete the official feature documentary about the rise and fall of Empire Pictures. This exciting production, entitled Celluloid Wizards in the Video Wasteland: The Saga of Empire Pictures, follows the life of producer Charles Band (The Puppet Master series) leading up to the creation of the most ambitious B-movie studio of the 1980's. While other independent film companies were targeting the growing home video market, Band was releasing low-budget horror and fantasy features to drive-ins and multiplexes around the world.

The thrilling saga of Empire Pictures will be told through the eyes of the innovative team of filmmakers and film professionals who worked together to reinvent and reinvigorate the independent film industry in the 1980s. Thus far, Daniel has interviewed more than 40 individuals to tell this epic story, including director Stuart Gordon (Re-Animator, Robot Jox), director/effect artist John Carl Buechler (Troll), editor/director Ted Nicolaou (TerrorVision), actress Barbara Crampton (Re-Animator), actor Richard Moll (Metalstorm, The Dungeonmaster), and director/producer Charles Band. He has also unearthed over 500 behind the scenes photographs, as well as 20 hours of rare archival video footage. Visit the official Empire Pictures website for more details!

Daniel is inviting you to JOIN THE ADVENTURE and help bring this electrifying story to life. With this Kickstarter Campaign, he hopes to raise $25,000 to cover all the final production and post-production expenses. This includes filming additional interviews, digitally transferring rare 35mm film elements and trailers, covering any legal fees, and contracting award-winning illustrator Paul Shipper to create an original theatrical one-sheet campaign for the documentary. The funds will also be used to commission an original film score by renowned Empire Pictures composer Richard Band.

Listen in as Phantom and Daniel discuss the impact that Empire had on their lives and taste in movies, as well as the process of creating documentaries and special features!