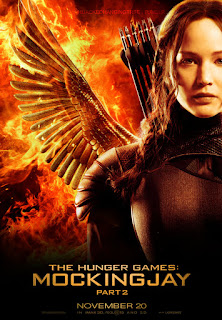 Another week, another glass of wine, and another post. Wait, that implies that I only have wine every other week when I post. We all know that's not true. Well, if you didn't know that before you do now. I had originally planned on reviewing the new James Bond movie Spectre, but it's been out for so long at this point that you've already seen it if you were that interested. I also didn't like or hate it enough to talk about it for very long. Let's just say that I'm ready for the current iteration of James Bond to move on to something new. Oh, and the opening song sucked ass. But enough of that. 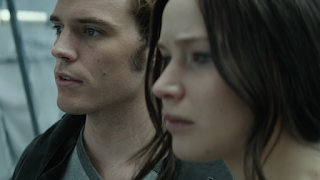 Instead I'm going to talk about a movie that actually opened just a few days ago. I guess that's also based on when you read this. It could be coming out on DVD next week, but who the hell buys DVDs of new movies anymore anyway? The point of all this rambling (this is an awful lot of rambling for just my first glass of wine. I apologize in advance if it gets worse) is that I saw The Hunger Games: Mockingjay Part 2 the other night. I will try to keep this as spoiler-free as possible, but the last book came out 5 years ago so if you really cared you'd know the ending by now.

Before we start talking about the actual movie I want to get out my complaints about how this 2 part movie crap needs to end now. I would blame the Harry Potter movies, but those movies deserved more time. I checked my copies of both Mockingjay, and The Deathly Hallows. The first was 388 pages, the latter was 759 pages. You could really make a case (and I can make that case if you'd like to get into all that with me sometime) that every Harry Potter book from Azkaban on could have been 2 movies, or at least 4 hour extended editions like the The Lord of the Rings movies. We also had 7 books starting all the way back in 1997 to get attached to those characters so to break the last one up felt like a nice way to give people time to say good-bye to the end of an era. By comparison the first Hunger Games book came out in 2008, and so does not seem to qualify as shaping a generation. That, and the first part of this 2 part ordeal was so dull. Oh boy, 2 hours of political intrigue and Katniss being pissed off! Only one really good action scene springs to mind right now, and it was too short. One of the friends I saw part 2 with was concerned about them adding a ton of made up shit or dragging real stuff out to fill up the time for this one, but I think they really did that all in part 1. If anything, I felt like a bunch of stuff was shortened for part 2. My least favorite thing about books being made into movies is when they cut shit that really happened out to make room for some stupid shit the screenwriters just made up. I'm looking at you John Carter of Mars. 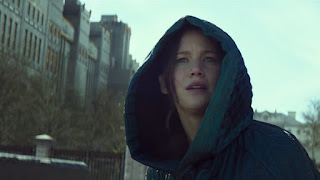 Okay, bitching done. Now let's talk about the actual movie I just saw. I kind of figured this would be the more exciting of the 2 parts. It goes from teen angst to revolution, and in spite of the return of Peeta and his whining it's pretty damn well paced. To be fair, Peeta was kind of a bitch throughout the books too though. So Katniss wants to head off to the capitol to kill President Snow who has caused pretty much everything that has ever gone wrong in her life. Rebel President Coin doesn't want her to go because Katniss is the face of the rebellion. If Katniss dies in a way that doesn't make her a good martyr then Coin doesn't benefit from her death. Previous awesome winner Johanna Mason isn't stable enough to go along despite the fact that she's pretty much the best victor ever. Instead Coin makes a deal with Katniss. She can go try and kill snow if she goes along with some of the most badass the rebellion has on hand for protection. It seems that Katniss and Gale are just too strong and chiseled to make them seem human enough for the downtrodden masses, and some fodder is needed for fairness sake. Fair point; they are a couple of very pretty people (not that Liam is as hot as his brother, but it's not his fault I suppose), but Coin decides to throw Peeta into the mix for the sympathy vote. Or because the gamemakers want to keep a compelling love story drama going; whatever. So the increasingly annoying adolescents head off into the capitol with Finnick (who sadly, doesn't kill anyone with a trident this time around), Margaery Tyrell (or Anne Boleyn depending on which time period show you've seen her in), Foggy from the recent Daredevil series, the woman from Swimming with Sharks (or Battlestar Galactica or The Killing depending on what you're in to),  and a host of "red shirts" head off to the Hunger Games style mine field that leads to the capitol. This is the part I was really wanting to be super cool, and it totally was. It was pretty much exactly like I pictured it when reading the book. There were a few deaths in the book I thought had been under-played that I wanted to see made more of in the movie. I didn't get them; especially one of the most heroic deaths, but I won't spoil that for those of you too lazy too read a book that takes pretty much half a day to get through. 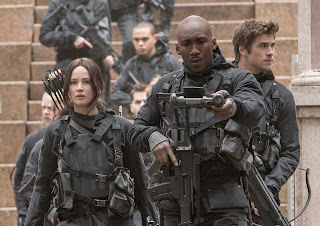 It can't be too much of a spoiler to reveal that a few of Katniss's allies make it to the capitol, and things go from bad to worse. If you thought they were going to pussy out on what is arguably the most diabolical event in the whole series then you were wrong. A very horrible thing happens that affects Katniss very directly, and she has to choose who to trust, and who to make pay. It's pretty upsetting, and pretty well done too. I'm not as overly impressed with Jennifer Lawrence as the critics seem to be, but she was really good. It was a realistic performance given all the nonsense happening around her. I wish there had been more Woody Harrelson, Jena Malone, and Elizabeth Banks, but since it wasn't their story I guess I can see why the cuts were made. Again, I'd have been fine with shortening the first movie to make the second longer. That would have allowed them to include more of the good character drama from the latter part of the book. I could have done with a lot less with the kid sister's cat in part 1 if it meant more of Johanna's drug withdrawal, and why she was left behind when her fellow survivors went off to fight the "big bad" in part 2. 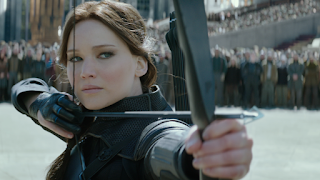 If both parts of this book were combined into one 3 and a half or 4 hour movie I would absolutely give it top marks. Given that I have to take part 1 into account when talking about part 2 I can't give it quite the kudos it deserves. Still really good; better than I was expecting, but not as good as it could have been. To break such a short book in to 2 parts meant that everything should have been included, but I guess the producers seem to have been taking more cues from The Hobbit than they were from Harry Potter. Or they just wanted to make as much money from the franchise as they possibly could more than they wanted to make a really true to the source material movie.