Deontology vs. Utilitarianism: The Ethics Argument Behind “Injustice.” 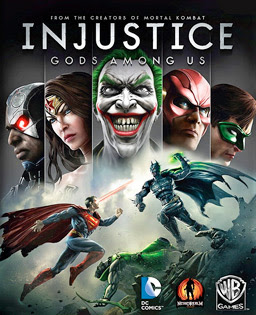 If you haven’t been able to tell by my pieces so far, my family and I are huge geeks.  My kids love Free Comic Book Day as much as we adults do, Family Home Evening usually consists of board games or Family Game Night on the Wii, and we are forever in debate with our kids over who the best Doctor is  (My husband and I love Christopher’s Doctor, our oldest supports David, and our Six and Three year olds are pro-Matt all the way.)  So when Injustice came out it became a family stable.  Granted, the younger two can’t watch certain scenes or play certain characters because of graphic content (Joke for example is off limits due to setting people on fire.)  But my oldest has became a natural-and I stress NATURAL- at fighting games.  Seriously…the kid could be ready for the pro circuit with a year of training.  It’s frightening.  As much as we love Injustice I realized that I had never touched the comic and was always drawn to it when I visited out local gaming store.  While looking for an essay book in my library titled “Final Fantasy and Philosophy” (Not kidding.  Look it up!)  I came across Injustice:  Volume One Year One.  I grabbed it and dove in.

Never in my comic reading years has a comic raised my hackles more, pulled me in deeper, and raised more of an existential and ethical debate within my brain.  And people, I have read a LOT of comic books. 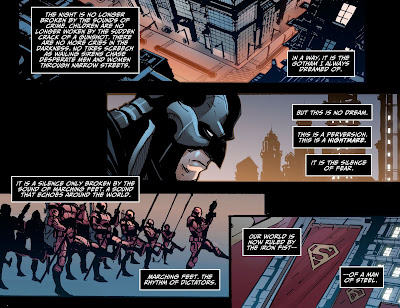 If you haven’t read it and don’t want spoilers than stop here.  If you have or don’t mind spoilers because you’re curious about my write-up then let’s get cracking.  Injustice all starts because of a tragic death.  A pregnant Lois is killed by Superman…but not on purpose.  Kidnapped by the Joker and Harley, she is operated on and implanted with a dead man’s switch to a nuclear device.  Clark is triggered with a Kryptonite laced blend of Scarcrow’s fear inducing gas and, thinking that Lois is Doomsday in a hallucinating state, drives her up out of the atmosphere in an attempt to keep Doomsday from his family.  In accidentally killing her with oxygen deprovation he activated the dead man switch in her chest that sets off the nuclear device over Metropolis.  An entire city decimated, a man’s family in ruin, and the universe’s ultimate Boy Scout comes back to Earth to drive his fist through the Joker’s chest in retaliation.  We lose the one man who we thought was never able to be tainted in that one act of violence, all because of one conversation between Batman and Joker:
Batman:  This has always been about us.  Why did you this to HIM?

Joker:  Every time you and I play, I lose.  I was getting a bit bored of always losing.  I
Thought I’d try this on easy mode for a bit. 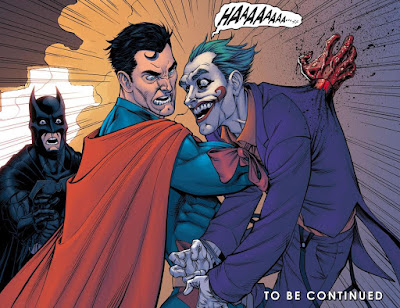 What drives this comic into the realm of ethics is the fact that, much like Xavier and Magneto, this catastrophic event that not only befalls Clark, but the entire city of Metropolis, divides the populous in an even split between two mentalities.  Clark goes on a self-led mission to end all wars, all fighting, all terrorist activity around the globe.  If they will not end peacefully then he will force them.  Half of the world agrees with his tactics while the other half does not; this even split includes the Justice League.  This is where you begin to see the colors of our superheroes’ ethical standards as well as how far some will go to support them.  The question is who is right in the end? 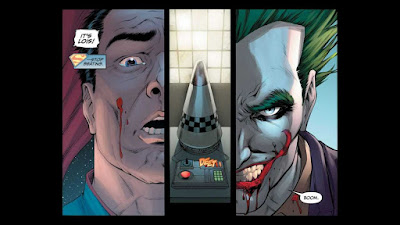 An essay in the book ‘X-Men and Philosophy” points out the fact that in moral philosophy studies there are three schools of thought, or right/wrong accessment:  virtue ethics, consequentialism, and deontology.  For the purposes of this piece we’ll be focusing on the last two.  In consequentialism, a popular methodology is utilitarianism.  In utilitarianism, acts are considered moral if they lead to overall happiness for the most people.  In an abstract way you can construe this as acts that lead to the populous’ “Well being"or "Their own good” to make them “Happier and safer.”  The death of Clark’s family and the nuclear fallout that resulted afterwards led Clark down this path.  By the end of Volume One he is well rooted in this mentality.  We know by the video game that the comic originated from that he later goes from this methodology straight into Totalitarianism, but that’s something to write about when I go over later volumes of the comic.  You see fellow superheroes react in mixtures of shock, awe, understanding, and pity, to Clark's extremist views.  None shocked me more, however, than Wonder Woman.  I am disappointed in her development in this comic as she is coming off as an enabler to his unhealthy lack of grieving.  She is coming off as pushing him in his utilitarist direction and even Ares (The God of War) sees it.  This makes her off to be the wizard behind the curtain of this soon-to-be dictatorship.  Diana and Clark are only two sides of this, however.  You see how she supports this side of the moral coin and how she keeps Clark on this path.  You see how others support him on this quest, first out of grief and pity for their old friend and later in support of the work that he is doing.  The comic focuses not only on Clark’s story, but it dives into individual people within and without the Justice League.  You get to see their points of view on this mentality and how it affects their lives.  Why do they feel that the ends justify the means?  Why does Damian feel that forcing the world to cooperate is best for everyone?  Why does Diana feel that there is a peace that’s only to be found on the other side of a war that they wage with the people who wont’ stop fighting amongst themselves?  Why does The Flash feel so conflicted in supporting Clark and why does he suddenly feel that it isn’t their place to decide what makes the rest of the world the happiest? 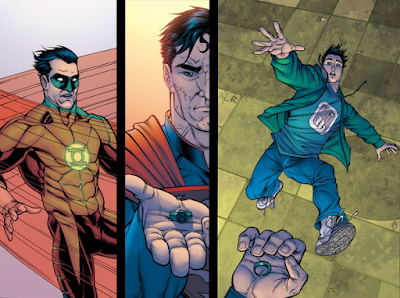 On the flip side of this debate you see the superheroes that took the opposite route.  Deontology is an ethical practice whereby the acts are judged based on their moral quality instead of the resulting consequences.  This is often gauged by rules, duties, religious standards, etc.  Batman I can see being a deontologist of the highest degree as he is the one that spearheads the campaign against what Clark is becoming.  Clark is the closest thing to a best friend Bruce has ever had and sees what this grief is turning him into.  He more than anyone knows that just because Clark has the ability to affect change, he hasn’t the right.  Much like Sherrilyn Kenyon’s Dark-Hunter character Acheron Parthenopaus always says, “Just because you can doesn’t mean you should.”  Many back him up as they see the results of Clark’s attempts.  From Catwoman to Green Arrow to Canary, they see that without society having its own ability to make its decisions and live by its own rules than it will fall apart and fall into a one man rule.  Something that Clark hasn’t seen yet as he slides down the slippery slope of attempting to help prevent tragedy by enforcing its end.  As Batman puts it in the comic:

“You can’t just STOP a war.  The reason for the fighting is still there.  The religion, the land disputes, the ancient feuds.” 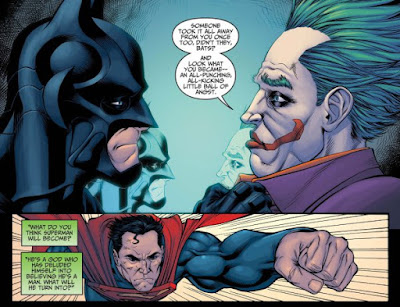 These two schools of ethics go head to head as Clark and Bruce talk it out in the Batcave at one point:

Bruce:  You killed a man, Clark.
Clark:  I did!  And every time you let that madman live, how many more did you
condemn?  Did you even feel guilty?
Bruce:  Every time.  But we don’t get to choose who dies.
Clark:  One death.  To save millions.  One. Death.
Bruce:  It always starts with one.  That’s how justification works.  But once you justify
something once you can do it again and again.  It becomes easier.  Right and
wrong blur.

Deontology vs. Utilitarianism.  Dark Knight vs Man of Steel.  Best friend vs. Best friend.  Justice League vs. Justice League.  But in the end, is it right verses wrong or simply mentality verses mentality?  Even Harley Quinn is not immune to the redemption of the soul and the salvation of sanity in this comic as you see sincere grief and emotion on behalf of another as a key player in the comic suffers the tragic loss of a comrade.  That panel stunned me.  I would have assumed nothing but shock or even glee from her…but to see her hand fly to her mouth and tears of grief in her eyes…at that point I realized that this comic had turned DC on its ear and things would never be the same. 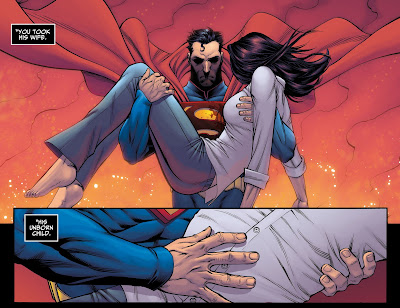 If you have played the game you know it’s awesome.  The storyline is just as amazing as the gameplay.  But to read the comic gives you an even broader picture and I promise you, it opens your mind in ways that you have never imagined.  It gives the chance to see this new world Superman is creating from the point of view of many of the superheroes left standing, which gives you insight into their mind and emotional state.  How does each person- even a hero who has seen enormous tragedy- handle a tragedy of this kind of monumental scale?  What does it do to them on an emotional, moral, and ethical level?  What side will you choose?  Who will you root for?  And how will you know if it is the right one, or if in this situation that right or wrong even exist?

Pick this up and read.  You won’t be disappointed.  Stay tuned for my take on Year Two Volume Two.