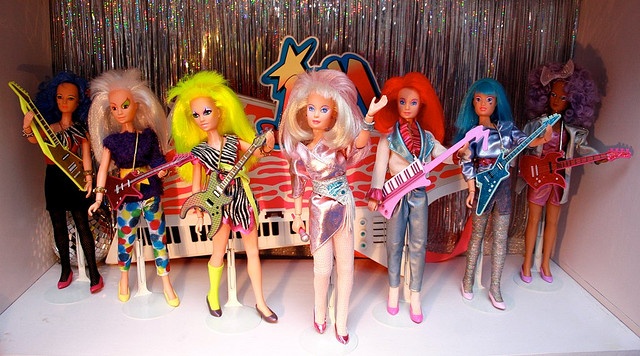 The Jem movie had many awesome throwbacks and many new and wonderful AU twists.  The best AU twist for me was having Rio know about Jem/Jerrica/Synergy from the get-go and help her with putting together Synergy’s pieces from the start.  That was a heart-warmer that any die hard should have wanted.  But what die-hards should have also been thrilled about were some of the costumes and their blatant throwbacks to not just the cartoons, but the dolls as well.  Any true Jem dedicate had everything growing up from the 1st and 2nd generation dolls to both Roadsters, to even that crazy pink llama.  The world of Jem collecting is expensive and time consuming as high quality pieces are hard to find and some are so rare that you can spend years searching for just the right one.  Let’s dive in to the world of Jem and The Holograms collectibles.


Let’s first look at the obvious; the dolls.  The dolls drew attention from the shelves firstly with their larger boxes.  As you see they are wider and more square than 80’s Barbie boxes and screamed flash and glitter with their mixes of neon pink, yellow, and orange; Barbie was traditionally “Tea Party Pink.”  1st Gen doll boxes had a large side panel flab with additional artwork that screamed neon glow and flash.  All of this drew you in, but then you saw the dolls.  Proportionally the dolls were much larger than Barbie, averaging 12 inches in height.  The body types were more accurate (which parents liked,) with not-as-narrow-as-Barbie hips, regular sized feet, bendable knee/hand joints, and larger heads.  Plus the instruments and cassette tapes with music from the show didn’t hurt either.  Jem doll sales did so well (and hurt Barbie sales so much) that other doll lines came out to compete.  Maxie dolls and Barbie and The Rockers attempted to steal her thunder, but failed to capture the limelight.

The 1st Gen Holograms were designed from the first episode clothing, with one exception.  Jem/Jerrica.  A subtle color change in the dress and the shape of the earrings were the only differences (TV show Jerrica sported a Pink/Blue motif while the doll wore a White/Blue outfit.)  All variants of the 1st Gen Jem/Jerrica had the round nub shaped earring except for the China release, which had the starburst shape.  The starburst was released with all subsequent dolls in the line afterwards.  The earrings light up with the help of a switch on Jem’s back activated by a watch battery compartment.  The dolls knee and hand joints meant posing in their doll stands for “action shots” with instruments; something you could never get with Barbie dolls.  The Jem/Jerrica was a Blonde/Pink layer so that you could pull up the top layer of pink hair to put inside of Jerrica’s hat, leaving only to Blonde, to dress her up as Jerrica.  Most dolls were “Tramp stamped” with the Hasbro logo and creation location, or even stamped on the back of the head under the hair.  These along with the clothing color shades, length, and even design, would vary depending on the country they were released in.  Just like any fandom it makes collecting that much more fun to get all the variants.  You die to have all four versions of 1st Gen Jem/Jerrica for the differences in earrings and face shape/makeup design or have both versions of Flash&Sizzle Jem just because France’s release called her Rock&Flash.  That’s what we do as collectors, right?

What makes it so difficult in the Jem verse for collecting is the fact that not only were these played with as much as any toy would be, but A: Jem was one of the most popular shows of the 1980’s so the toys flew off the shelves.  B:  The desperation for customized dolls became a popular thing in the late 90’s early 2000’s so many nude Jem’s were being snatched up to create original variants from episodes for dolls that never existed on the original market (Such as Astral or Regine, which I will touch on later.)  C:  It has become increasingly difficult to find mint condition collections that are pristine, so when those surface the prices are substantial and rightfully so.  D:  Many of the dolls that are most coveted are from late in the line production so their print number is lower, hence the rarity is higher; the price automatically inflates.  Bottom line: Jem is one of the priciest collector markets of the 80’s.

The show lasted three seasons; not long enough to capitalize on the toy line, but longer than many 80’s sensations were given a healthy run for.  The dolls were given two generations, various versions not seen in the cartoon, runs of the Starlight girls, playsets and a fashion line.  We even had a Starlight Waterbed that you could fill up with water, people.  Yeah, I had it.  Like any collectible it’s imperative to get these things in either NRFB (Never Removed From Box) or MIB (Mint In Box.)  For a die-hard getting one of this status plus an out of box for display is ideal.  As I said earlier, however, the pricing with Jem merchandise is the key.  The dolls are rarer than you would believe when it comes to being in an NRFB/MIB state, and the play sets and clothing (especially the on-card clothing) are even more so.  Here are some examples.


Raya is my favorite character in the show.  Appearing in Season 2 episode one of “The Talent Search Part 1” and becoming the Holograms’ drummer in “The Talent Search Part 2,” she was officially christened a member of the crew.  Her doll, however, was not issued until Season 3 of the show.  By the time that the doll was queued for run the doll line was scheduled to be canceled, along with the show.  It wasn’t uncommon for certain dolls in later runs to share face molds.  For example, Clash and Danse had the same face mold.  The rumor, however, circulated in some circles that due to the late run and subsequent cancellation that Raya wasn’t able to get her own original mold, so they grabbed Pizzazz and slapped her into it for manufacturing.  That’s right, people; Raya is technically Pizzazz.  Her number run was limited as she was one of last runs in the Jem toy line.  Where most dolls range from $50.00 to $250.00 on average in the collector’s market in an MIB format, a MIB Raya will run you $250.00- $400.00.  An NRFB in mint condition, no smoking home, with the box as pristine as the day it came off the shelves I have seen go from $400.00-$800.00.  The rarest of the rare, Raya Alonso one of the two most coveted Jem collectible prizes, right beside the coveted Pink Llama.

The Pink Llama…ridiculous and cute.  It was rumored that for some reason Jem was going to have a pink Llama as a pet on the show, so they sent out a mail in order form in which you could purchase this little cutie.  The Llama never made it to the show, but this darling is now a pricey pet to own.  Out of package I’ve seen a minimum of $20.00-$.70.00 and in package up to $70.00-$300.00 depending on condition.  He and Raya are the doll merchandise prizes, people.  Catch em’ while you can.

In my opinion, the most expensive article are the clothing pieces.  To find them out of package is great for those building their nudes for display from scratch; those are not as expensive and can be bought in bulk in some cases.  If you can find someone selling the old Rock Star dolls that is even better.  When the Jem doll line was cancelled the spare parts were sold, the pieces thrown together in random order on random bodies looking terribly awful, thrown into .50 cent store packaging, and labeled Rock Star Dolls.  They are often used as fodder for customizing and nude rebuilds.  However, if you are collecting on card, be in for a shock.  I have yet to see any Jem outfit go for less than $75.00- $300.00.

Thanks to the Integrity Doll line that was created and released yearly at San Diego Comic-Con we have the Jem Dolls we never did.  We have The Stingers, Lindsay, we even have the allusive Astral and Regine.  The picture above is the only proof that we have that at one point these dolls were to be released.  The third year Hasbro pitch catalog released the showroom shots, but the show and line were canceled before production hit the ground running.  It was sad for us all, but Integrity gave us these dolls below to make up for the whole in the heart of the Jem fandom.  Be aware, however, that these are not “Doll” dolls.  These are strictly display variants that were never intended to give to children to play.  They start out in the hundreds when buying them from Integrity and sell for no less at Conventions.  These are pretty and “pretty expensive.”  Worth it, but expensive nonetheless.

Just because Integrity created our missing dolls doesn’t mean you can’t create your own.  I’ve seen people take an Integrity doll and create the Jerrica from Midsummer Nights Madness.  I’ve seen Kimber’s from Hollywood Jem.  You name it!  Customization is a biggie in the Jem world.  There are many tutorials online specifically tailored for Jem doll customization and examples/walk-throughs.  Some amazing custom dolls I have found were made by Rachael Prins on Flickr.  Her page is “Custom Jem Dolls.”  Worth checking out.  And as I said before, the Rock Star dolls, single nudes and single clothing pieces found online make it easy to build a display doll from scratch.  Plus if you are wanting to make a custom doll from a specific episode and you have the sewing skills to create the outfit, you can create any look you want with the right equipment to repaint and re-weave the face/hair.  Just look at some of the customs out there and get inspired.

Like any collection it will take years.  It will be pricey and take searching, begging, bartering, saving up, and lots of work.  But if you’re dedicated you can do it.  If you’re a total Jem Girl/Boy I think you can manage it.  Heck, I’m writing this while listening to the Jem movie soundtrack while my Raya and Flash&Sizzle NRFB’s are sitting on my dresser smiling at me.  If I can do it, can’t you?