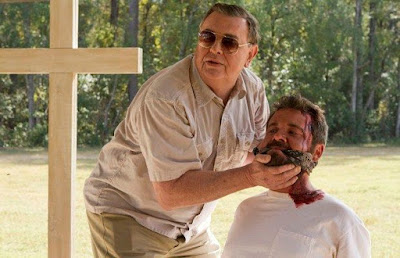 As promised, I'm diving into the world of psychotic, brainwashing, religious cults. It's an ironically perfect topic to celebrate Halloween. I grew up in a religion that condemned the celebration of the holiday and it was known to me for a long time as "the Devil's holiday". Coincidentally it was the only holiday that ever appealed to me. I found that the Devil is a tame, ficticious threat in comparison to what I see as a true evil, religion itself.

Religion, at some point in time, may have served a purpose for society. It allowed people to flex their creativity in an attempt to explain what was previously unknown. In some cases it gave rather decent guidelines as to how to live peacefully amongst ourselves. It gave people some kind of purpose as they were carried in confusion through an ocean of chaos. It gave hope that even through the most traumatic of circumstances, there is still a better life after this cruel, painful existence.

With all the good that came from religion, there was a plethora of horrible things that were spawned. The savage nature of man is evident in various religious texts. Demands for human and animal sacrifice as an offering to appease the wrath of one's deity are documented all around the world. Entire cities have been annihilated in religious conquest. Women were raped, children were killed, people were enslaved, and personal freedom was stripped all in the name of a God or gods. I'm sure religious motives were behind most of the wars that have ever been fought. The body count is unimaginable.

There's a desire within religious communities to spread out and recruit new believers. The more widely accepted a delusion is, the less insane it seems. Those that are weak, frightened or vulnerable are the most susceptible to promises of a hopeful future. They are programmed and manipulated to give up on this reality and seek out another. The more people involved means more money behind it, which means they wield more power. When a less accepted religion comes around with fewer followers they are labeled as a cult. It's a negative stigma that is usually gained by an often extreme approach to their belief system. This is the topic of today's film.

I had high hopes for this film because I am fascinated by religion, particularly the more obscure ones. I was also hoping this would be an original story, but unfortunately it's just a modern retelling of the Jonestown Massacre. I'm not against an updated version of the Jonestown film, but this film tries to be something else and ends up being exactly the same.

If you're not familiar with Jonestown, it was a real event that happened in the 1970's. Jim Jones was pastor at The People's Temple and managed to coral hundreds of weak minded individuals into a utopian commune he called Jonestown. It was a way to isolate the"righteous" from a sinful world that was awaiting God's judgement. The people there became prisoners and were not allowed to leave. When a news crew and U.S. senator came to investigate and bring some people back with them, they were met with a violent attack and killed. Jim Jones demanded the entire community drink a lethal drug cocktail mixed in Kool-Aid. The ones who refused were forced or shot. Jim Jones shot himself in the head after the bodies of his congregation had piled up and were left to rot in the sun. As far as I know, this was the largest mass suicide in history.

That was a good story, right? I'd like to see that story played out. Director, Ti West, tries to give it to us in the form of a found footage film. Yes, another found footage film. It's ok, the found footage style doesn't really hurt this movie. It reminds me of the documentary footage shot by the news crew that went to the real Jonestown. What doesn't work is that, despite so many obvious similarities to the historical event, they decide to change characters, locations and time period. 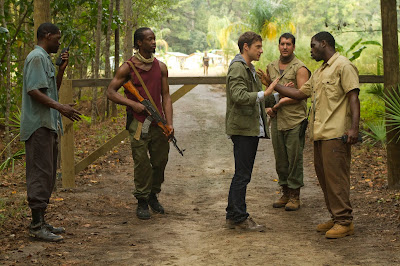 Our perspective is delivered by a documentary crew that follows a man in search of his missing sister to a sort of paradise in an undisclosed location. Upon arrival via helicopter they are escorted into the community by armed guards. This is where they get their first sense of hostility. However, that is contrasted by the extremely happy tone of the rest of the community. People claiming they have never been happier and moving there was the best decision of their life. 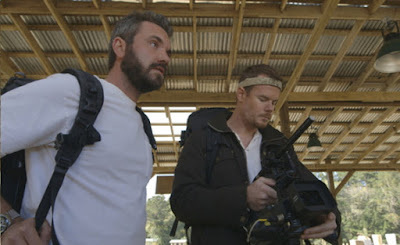 The People make several references to "Father" during interviews by the crew. Father is the leader of the cult obviously and is someone they would like to interview. They are rejected at first, but after a bit of snooping around they are able to secure a taped interview at the night's event. 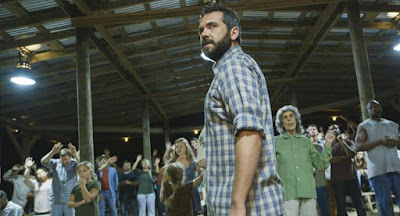 Father is made to closely resemble Jim Jones, sunglasses and all. He sits down for the interview and spills out his ideologies and desire for the community to be untouched by the outside world. During the interview several residents try to send signals or notes to the crew in distress. It's becoming obvious that some are here against their will.

The crew tries to make arrangements with those who want to leave, but are met with violent resistance. The rest of the film unfolds just like the real Jonestown Massacre. It's a little bit different and the scale is smaller, but it's damn near the same thing. Why didn't they just make a Jonestown movie? I don't get it at all. 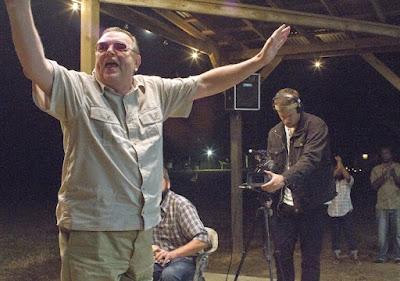 I don't want to say this was a bad movie, despite my gripes, but it could have been a lot better. This is the kind of horror I prefer, the kind that's grounded in reality and can or has happened. It's terrifying what people will believe in and even more terrifying what they will do to defend that belief.  That being said, if you want to see real horror, go watch some documentaries on Jonestown. Then you'll see what a real monster looks like. The real monster could be living next door, delivering your mail, checking for cavities or coming home for Christmas. The real monsters are us.

IMDB gives the film a 6.1, which I will totally agree with. It's enjoyable to watch, but fails on certain levels. The camera style is ok except for certain situations where the camera being on makes no practical sense. If you like cults and such I'd recommend checking it out, otherwise you may want to pass.

31 Days of Halloween continues here on Needless Things so I will have to come back next time with a truly frightful and totally fucked up film. Do you dare return to Devlin's Domain?

About Me: I have a couple of different aliases, but for this column I will use my middle name. I am Devlin and I currently reside in Atlanta, GA. 32 years of age and still feeling immortal. Former Rockstar, current Pro Wrestler and hell, I'm still a Rockstar at heart. I got my first taste of obscure cinema when I was about 8 years old. My Dad would take us to the video store every weekend to stock up on classic horror films to watch on his projector. They were mostly harmless, PG-rated horror films like the great Universal monster movies. Then one night he rented a movie for himself to watch after we had gone to bed. I was so intrigued by this film that I wasn't allowed to see. I begged and begged and he eventually caved. That night I was exposed to a film unlike anything I had seen before. Ever since that night I wanted to find more films that gave me that same sensation. I wanted to feel shock and disgust. I found my place in the Horror aisle. The film I watched was Faces of Death. Thanks Dad.