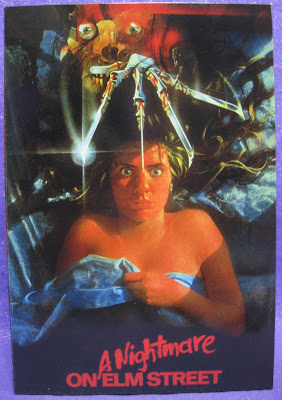 Apparently this is “Old Toy Month”.

NECA’s “Ultimate” Freddy Krueger came out last December and I just never got around to reviewing him. Sometimes even though I might really dig a new toy, I have trouble getting motivated to do a review. I sold off all of my Pacific Rim toys recently and barely reviewed any of those. Although to be honest I think it was a lack of excitement over them. I love that movie and the toys were beautiful, but I think that NECA might not have been the best company to make them. Pacific Rim is about monsters and mechs beating the shit out of each other, but those were some “toys” that were equally fragile and dangerous. You could kill someone with the sharp points on the Kaiju and if you did more than blow gently on the Jaegers pieces would fall (or break) off. I would much rather have had toys that could actually be played with from Hasbro or Mattel. Or heck, even JAKKS probably could have offered up some kickass figures. They would have been huge, at least.

I have to admit that I wasn’t exactly dying to get this figure. As was discussed on a recent episode of the Needless Things Podcast, the original A Nightmare on Elm Street is not the first one I saw. What that means is that the first time I saw Freddy he had stripes on his sleeves. And I didn’t realize that he didn’t have stripes on his sleeves in the first movie until one of the McFarlane Toys releases brought it to my attention. So I actually saw the first movie several times without even noticing the lack of arm stripes.

Even though it’s the original sweater that started it all (or whatever) and it’s canon and blah, blah, blah – I do not like this version of the sweater. It will never stop bothering me that the arms look unfinished. And obviously I’m right, because they fucking changed it in all of the other movies. But otherwise this figure looks fantastic and comes with a bunch of critical Freddy goodies, so I had to get it. 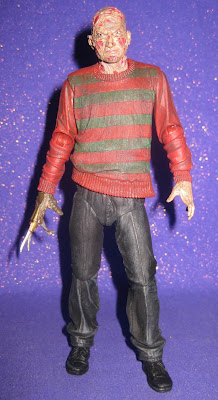 Freddy is a bit more posed than I thought he’d be. NECA has progressed far beyond the statues with five points of articulation they used to make, and this figure certainly isn’t that, but the specific shape of his sweater, the angle of his hips, and the slant of his shoulders mean this figure won’t ever have a truly “neutral” pose.

Freddy is a very kinetic character with a specific style and body language, so maybe it would be wrong to have a regular figure without these things, but that’s kind of what I was expecting. 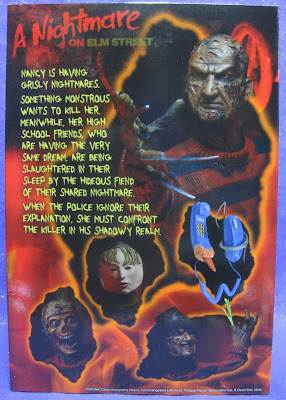 The box is quite fancy, as the packaging for these releases from NECA tends to be. The front panel is the art from the one sheet for the original movie. It’s one of my favorite horror movie posters ever and I’m always happy to see it. This panel opens up to reveal the figure and accessories behind a window. I love the sweater print on this side; the picture of the figure on the opposite panel less so. I’m not a fan of pictures of action figures on packaging unless it’s the rest of the line on the back. I’d much rather see concept art or something.
The back features more pictures of the figure and a synopsis of the movie. It all looks good enough that I can almost excuse figure pics. I love the flame motif recurring in the graphics. 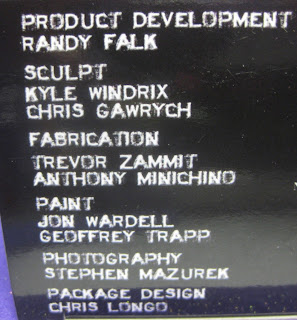 The side of the box has the all-important creator credits. 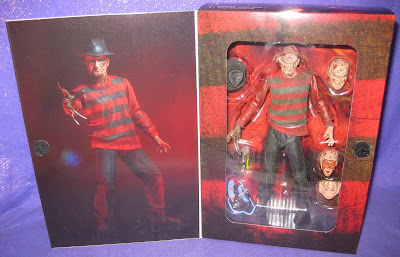 This is a fantastic box. It’s eye-catching on the shelf but not overly large for what’s in it. 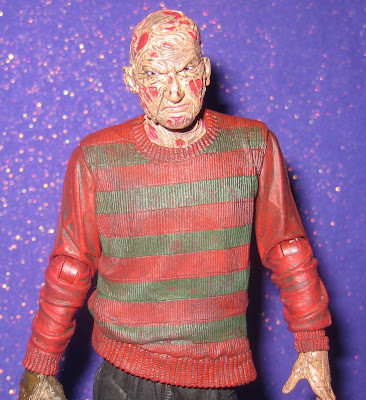 Freddy comes with three heads, but for this section I’m going to talk about the one that comes attached to the figure in the box – let’s call it the stock head. I’ll cover the others in a bit.

The stock head is easily the best Freddy Krueger head sculpt I’ve seen. Even considering the sixth scale versions and McFarlane’s 18” inch figures, this one is incredible. The look of a burn victim has never been captured better. The scarring has so much depth and definition it’s almost painful to look at. The flesh looks as though it’s been melted and stretched to the breaking point. The paint is also fantastic, with more hues and washes than I can count. Freddy’s eyes are perfectly applied with glossy paint and both irises looking in the same direction, slightly askance. 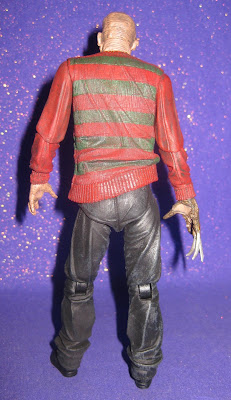 The sweater isn’t quite as perfect. The sculpt looks very good – the trim around the neck, waist, and shoulders is a larger knit than the rest of the sweater. I particularly like the folded over cuff on the left hand. The smaller knit that is on the body of the sweater looks great. It flows with the folds and hang of the garment.

Here are the things I don’t like about the sweater: 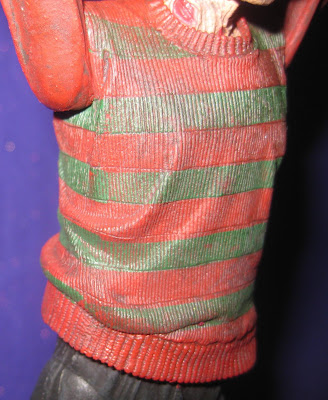 The stripes are not painted on well. The edges of the paint apps do not line up with the edges of the sculpt. Also, the green looks less like there’s aging than like it just wasn’t applied well.

I can’t find a lot of good reference pictures of this sweater from the movie – there are a shit-ton more pictures of the all-striped sweater – but the ones I can find seem to show that the lack of knit on the arms is incorrect. I can’t imagine this is an oversight, so NECA must have had good reason for producing the figure this way, but it doesn’t look right to me. 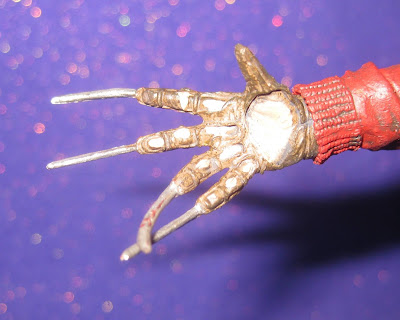 The glove is remarkable and is the best one I’ve seen at this scale. No detail is overlooked. The basics are here – the blades connected to the plates and the rivets holding it all together. But NECA also nailed the glove itself. It has the holes in the palms and fingers that you’d be forgiven for not noticing. And the paint is excellent. The metal portions look aged and the glove sees positively ancient. Pose-wise, if you’re only going to include one gloved hand, this is the one. 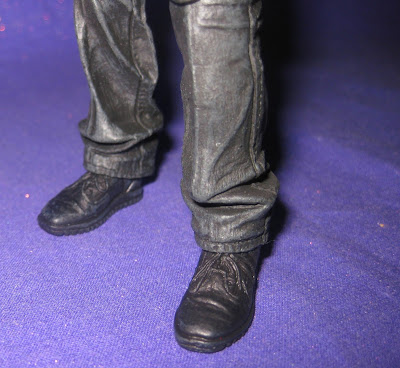 The trousers have a great worn look thanks to a light wash over the black. The seams and folds add a lot and look just like the baggy pants Englund wore in the movie.

The shoes are chock full of details. The treads are intricate and the top portions have stitiching and laces with wonderful definition. 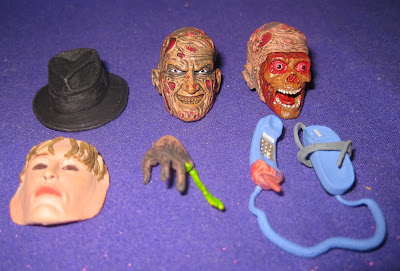 Freddy comes with two additional heads, a hat, a face, an extra left hand, and a telephone. 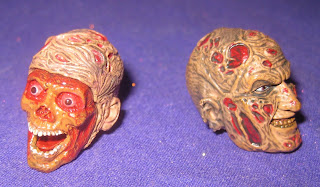 The first extra head is smilin’ Freddy. Though not seen much in this movie, it is the expression most people are probably more familiar with. The sculpt and paint are just as good as the stock head, with the addition of grody yellow teeth.

The other extra head features the most grotesque skull I have ever seen on an action figure. Which I just realized also looks very much like the skull in the movie poster. This thing is straight-up nasty. The line where Freddy’s flesh has been torn away to reveal the skull is so well-defined and gross.

The heads all switch out easily and stay put. 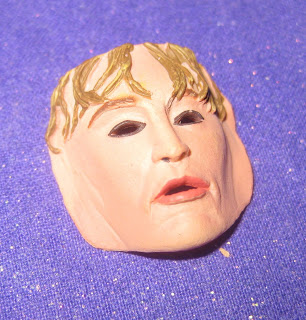 The face is super creepy. The paint and sculpt are excellent, but it looks fake. But that’s what it looks like in the movie. So it works. 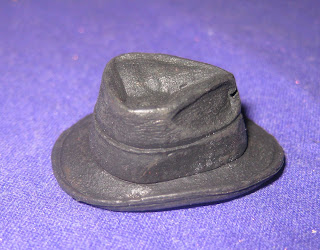 If you’re making a Freddy Krueger action figure, the fedora is just as important as anything else. This couldn’t be just some hat. And it isn’t. The sculpt suggests years of wear. The paint is subtle, but adds just the right amount of extra texture. This piece fits perfectly on all of the heads and stays nicely. 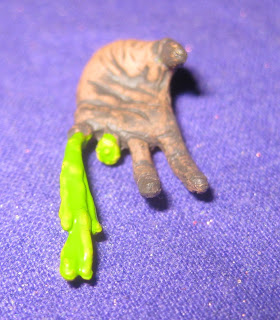 The extra hand is missing two fingers, because there’s a scene where Freddy lops his digits right off and it’s disgusting. The hands switch out easily. 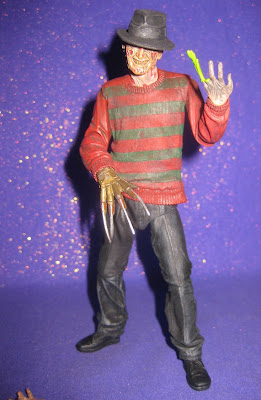 I don’t specifically remember Freddy being full of Teenage Mutant Ninja Turtles/Slime Pit/quarter machine ooze, but now I’m thinking that and “Oozin’ Freddy” figure would be a great idea. Get on that, NECA. 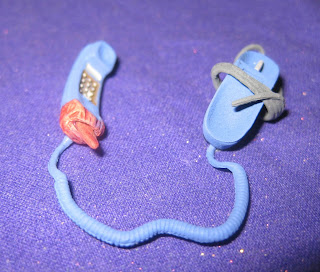 The phone represents one of the most horrifying and effective scares ever in horror. It looks fantastic and the paint is wonderful. Freddy’s tongue is suitably nauseating. But as great as this thing looks, it’s missing one thing – Nancy. I understand the desire to make this accessory, but now I am never going to feel complete as a human being without an Ultimate Nancy Thompson action figure. 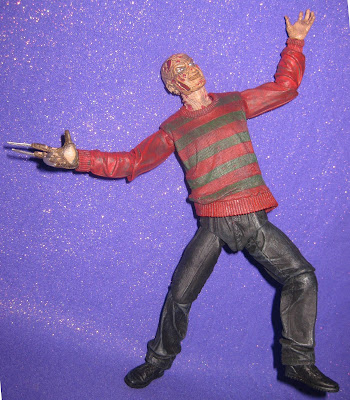 While nothing will ever top the fun of the Freddy action figure from The Dream Master, this one is pretty great. It’s loaded with meaningful articulation, and while it isn’t as poseable as a Marvel Legends figure, this is Freddy Krueger, not effin’ Spider-Man.

Memo to Myself: Draw Freddy Krueger as Spider-Man.

The arms have a wide range thanks to ball-jointed shoulders (that mesh very nicely into the holes on the torso) and elbows with swivels and pivots.

The legs also have a nice range, though the ankles could have been better (which is the case with almost every ankle NECA produces going back to the days of the infamous rubber feet). 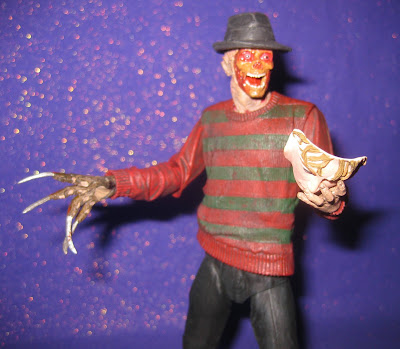 The figure itself would be good enough, but the wealth of accessories add tons of play value. The figure can interact with most of them and they’re all ghastly fun. This figure is leaps and bounds ahead of McFarlane’s and I’d even put it up against one of the super-articulated Japanese figures (if one exists) because the joints don’t look like ass.

I would love to say that this figure is a must-have, but if you’re like me and prefer a fully striped Freddy this is only going to annoy you. It’s not NECA’s fault, it’s Wes Craven’s. I’m also not thrilled with the posed portions of the sculpt and the arms that lack texture, though I can’t find any proof that that’s “wrong”.

If you need any and every Freddy or just want one that can move around, this is for you and you won’t be disappointed. But it wouldn’t surprise me one bit if we see an updated version at some point with a better sweater and even more outrageous accessories.

And hopefully a Nancy.