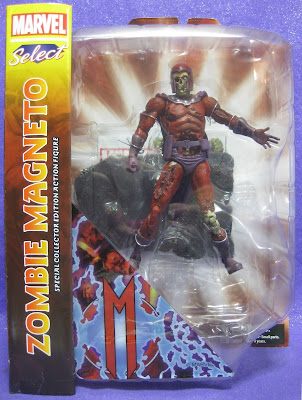 It took me a while to check out the original Marvel Zombies miniseries because, quite frankly, I didn’t see how it could be any good. Also because it started in December. If it had launched in October I probably would have bought it just because.


I’m pretty sure I was already reading The Walking Dead by that time, but it had only been around for two years and Kirkman – the writer of Marvel Zombies – might not have lodged in my head as an excellent writer yet. I’m hazy on the details, so I really don’t know how all of that went down.

The point is that I did eventually read Marvel Zombies and was surprised at how good it was. The story was much more complex than I was expecting and the characterizations of the Marvel superheroes as insane, flesh-eating monsters were excellent. Kirkman had a deep understanding of the Marvel mainstays as well as a fascinating take on how zombification would affect them. The story was full of comedy and pathos. I still can’t believe how good it turned out.

Even though the writing and interior art (the latter by the incredible Sean Phillips) were exceptional, the public at large probably knows Marvel Zombies best from Arthur Suydam’s fantastic cover art for the series. Each one was a zombified parody of a classic Marvel cover, done in Suydam’s striking and immediately recognizable style. Say what you will about Suydam himself, but there’s a reason that ten years after the fact we’re still getting action figures based on the way he drew these characters.

The first batch of figures were released years ago and included Spider-Man, Hulk, and Colonel America. For whatever reason, it took years to follow those up and Magneto was the next release, with Sabretooth following nearly a year later (his review is coming, hopefully before October ends).

Magneto played a key role in the original series – he facilitated the escape of the Ultimate Fantastic Four from Earth-2149 in the story that led to the miniseries – and is more than deserving of an action figure.

All of these figures so far have had specific postures to suggest their undead state, but Magneto is sculpted with a fairly standard superhero stance. As with the others, DST has captured the shapes and colors of Suydam’s style nicely.

The figure comes in the massive DST “select” blister card/box thing. This seems like way too much package, but it works for the many different sizes of action figures that DST produces. I have to give them credit for their massive Hulks, Juggernauts, and Hulkbusters.
I love the side panel on these figures because it allows comic book shops – who are often pressed for space – to shelve these figures book-style and still have the characters displayed in an easily identifiable manner.

The back features a shot of the figure – no need for an illustration with that handy side panel – and a bio and sculptor credit. I don’t know who chose the headache-inducing print style, but they should rethink it.

Other currently available figures are at the bottom, but I think other versions might have been more appropriate…

The skull on top of the figure’s shoulders drew my eye before anything else. Most of the zombies have some remnants of their visage intact, but Magneto is all skull. And an eyeball. It’s hideous and has a very Lucio Fulci feel. The shape is all disturbingly mushy and the paint – always one of DST’s strengths – is nasty. In a good way. You can almost smell the runny, rotting remains of Erik Lensherr’s flesh. The fact that you can see straight through his jaw to his neck is a nice touch.

I love how the collar and cape look. They got the size just right on the collar and the way the cape unfurls from beneath it looks great. There is a rust-colored wash to suggest oxidation on the purple portions of the Master of Magnetism’s wardrobe, which is a wonderful way to emphasize his decay.

As with most zombies, Magneto has suffered from some massive and disgusting trauma. What’s fun about this figure is that thanks to the red of Magneto’s costume it isn’t all immediately apparent. You have to get up close and personal to see the rent flesh and exposed muscle showing through his torn bodysuit. The highlight of the damage is the massive hole blasted through his abdomen. All sorts of mushy guts, gristle, and even spine are visible. It’s one of the nastiest wounds I’ve ever seen on an action figure.

That brings me to the cape itself, which has a hole from the exit wound sculpted in the middle. I love it. The damage to the cape is sculpted nicely. It looks sufficiently tattered and I dig how much of it is missing. This, as much as anything else, is an indication that this Magneto has been through some hard times.

The belt is a separately sculpted piece and it looks great. It’s a bit odd that it’s still there, what with the giant hole and all, but that’s how the character was drawn.

The wound on the right thigh is grotesque, but at least there’s still some meat left there. That’s more than you can say for this poor guy’s left knee, which is exposed – and excellently sculpted – bone. I was concerned about the integrity of that double joint on the knee, but it’s as sturdy as could be.

The figure has a nice heft. In general the DST figures feel much sturdier and higher quality than the figures produced by Hasbro, NECA, or DC Collectibles. I’m not trying to call anybody out, but if the warped legs and torn off limbs fit…

Magneto comes with a stand and a helmet.

The helmet is Magneto’s trademark anti-Xavier dome and it looks great. It’s a thicker plastic than other Magneto helmets I’ve owned and holds its shape well. The metallic purple trim is applied nicely and there’s some scuffing painted on the sides.

The stand isn’t actually a stand so much as a base. It doesn’t have pegs or anything – it’s just a piece of street with a Green Goblin hand and an undersized manhole on it. It doesn’t connect to the existing pieces from the other three figures, so I don’t really care that much about it.

DST has worked in as much articulation as they see fit. This means more than what they were putting into figures five years ago, but not as much as Hasbro.

Magneto has ball joints at the neck, shoulders, and hips. The elbows and ankles have standard pivots. The wrists rotate and the knees are double jointed. All of the joints are sturdy and have pretty good range. The double jointed knees are kind of pointless since the hips don’t have a huge range and the ankles don’t have the deepest bends. But that skeletal knee with the joint worked into the natural design is worth it.

You can get just enough poses out of Magneto to push him more into the “action figure” category as opposed to “collector figure”. But he does look nice enough to fit in the latter. The fun is more in looking at all of the grotesque detail than in posing, but he can hold a few different poses, too.

I’m not sure the appeal of this figure extends far beyond fans of Marvel Zombies. It’s a little too superheroic for someone who is just a fan of horror toys and to grotesque for someone that just wants a Magneto figure. But it is a great piece for what it is and it makes me excited for future releases.