31 Days of Halloween: The Phantom Channel Listings for October 19, 2015 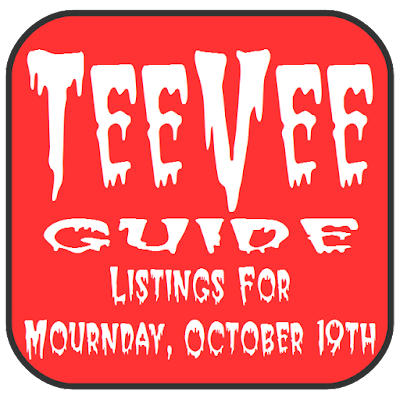 We’re well into 31 Days of Halloween and I wanted to check in with some spooky updates, as well as another day of fantasy Halloween programming to hopefully prompt you guys to put together your own dream viewing schedules.

If you missed my listings last time, you can check them out here.

In other news, the Spirit Halloween store is on point this year. They have the best selection of costumes I’ve seen in quite some time and let me tell you – nobody skirts copyright quite like they do. I bought a purple coat that is quite clearly a Heath Ledger Joker coat (so it’s my own damn fault when some idiot calls me Joker now), but since it doesn’t feature his likeness and is simply called “purple coat”, what could Warner Bros. possibly do about it? They also had one of their cool animated masks that is just as clearly the bear from some game that all of the kids are playing - Five Nights at Freddy’s. Except it isn’t quite.

There’s a lot of stuff like this, as well as a huge new assortment of awesome weapons. My favorite was a functioning plastic chainsaw. The chain actually turns and it makes all of these loud chainsaw noises (as opposed to kitten noises – I don’t know why I felt the need to specify there). There are also new katanas, spiked clubs, and all kinds of cool makeshift weapons like the stuff from Dead Rising.

Apparently not all Spirit stores feature this, but ours had a giant underground bunker set with steam and windows and animatronic zombies. There was also a massive display up front with more animatronics – some new like the crazy Cerberus:

And some old favorites.

All in all Spirit has provided the biggest and best Halloween injection I’ve had so far this year. And I needed it, because my work schedule and the absolutely shitty weather has kept me from doing much of anything. Usually by this time we’ve hit at least one haunt, but it hasn’t happened yet.

It did stop raining long enough the other day for us to put up our exterior Halloween decorations, so that was a huge relief.

Just to get them down in print (so to speak) and to share them with you guys, here are the spooky things I want to do before Halloween: 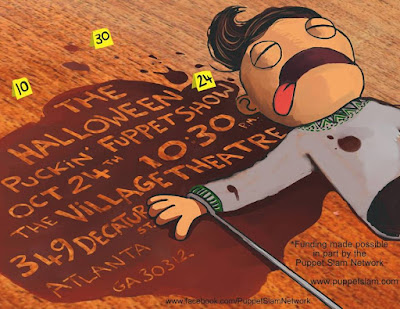 The Halloween Puckin’ Fuppet Show is a Halloween-themed puppet slam. It takes place at the Village Theatre in Atlanta on October 24th. For more details visit the Facebook Event Page.

I want to get back out to Six Flags for Fright Nights. We had so much fun there a couple of years ago when I was doing the MCW shows there. I feel like there was a period of time when the park wasn’t putting as much effort into Halloween activities, but it was great then.
Given what’s happening with The Masquerade, this will be the last year that Chambers of Horror happens there. Chambers is the nastiest, goriest, haunt in Atlanta. It’s always a blast and I definitely want to get out there to do some shots and see what they have in store for the big finale.

Every year Mrs. Troublemaker wants to go to some kind of corn maze or hayride or outdoor something-or-other. I hate the outdoors, so it doesn’t end up happening. This year I’d like to try to make it out to one of these sorts of things. Granted, I’m not going to plan it or anything. But I’ll go as long as I don’t have to put any effort into it.

And now it’s time for another day of movie and television programming designed to get you into the spooky mood for Halloween!

6:00 – Alvin and the Chipmunks Meet the Wolfman – Family – Ross Bagdasarian, Maurice LaMarche
Alvin, Simon, and Theodore get a new neighbor named Lawrence Talbot and things start to get weird.(75 min.)

9:00 – Courage the Cowardly Dog “Queen of the Black Puddle/Everyone Wants to Direct” – Children
A strange puddle appears after a rainstorm and Eustace and Muriel board a famous director with evil intentions. (22 min.)

12:00 – Monster Squad – Horror – Duncan Regehr, Andre Gower
A group of young friends must band together to stop Dracula and other classic monsters from taking over the world. (82 min.)

1:30 – Tales from the Cryptkeeper “Uncle Harry’s Horrible House of Horrors” – Children
A carnival haunted house changes an uncle’s mind about the supernatural. (30 min.)

2:00 – Dungeons and Dragons “Quest of the Skeleton Warrior” – Children
The party must face their greatest fears in the Lost Tower. (24 min.)

2:30 – Superfriends: The Legendary Super Powers Show "The Case of the Dreadful Dolls/The Village of Lost Souls" – Children
Dollmaker uses voodoo to control the Superfriends and Braniac turns a village into zombies! (22 min.)

3:30 – The Real Ghostbusters “The Halloween Door” – Children
Crowley wants to end Halloween forever, but instead releases a multitude of ghosts on Halloween night. (30 min.)

5:00 – Alf “Some Enchanted Evening”- Comedy
Alf is not allowed to go trick or treating, so he attends Willie’s Halloween party. (22 min.)

10:00 – Trick or Treat – Horror – Gene Simmons, Ozzy Osbourne
Heavy metal rocker Sammi Curr is back from beyond the grave with a new album – “Songs in the Key of Death”! (98 min.)

Also, follow Phantom Troublemaker on Instagram for #Drawlloween and the return of #monsteraday, where I feature a different monster toy every day, all month long!

Until next time, stay creepy!