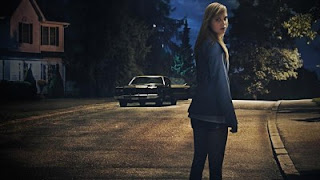 I know It Follows has really good reviews and meta-scores and all that, but I don't know that many people who've actually seen it. And some of those people didn't "get it" so I feel like I need to put my two cents in here. I've seen it twice now, and would totally see it again. If you haven't seen it yet go to your nearest Redbox or On Demand to watch it now! I thought it was a brilliantly understated work of art that took me back to John Carpenter's Halloween or Last House on the Left or any of the other great classic horror movies of the 70's and early 80's. It was done that way on purpose. It was an homage without being tongue-in-cheek or giving the audience a knowing wink. It was totally serious, and that's what made it great. Well, that and just about everything else in the movie.


The cast of teenagers all look like other people from our era, but you can't tell what time period they're really supposed to be in besides the e-reader that the main character's dorky friend uses to read Dostoevsky. It looks like a cross between a clam shell and an old fashioned birth control pill package. I've never seen anything like it, but it's presence is the only thing that keeps you from feeling like you're not in the 1975-1982 time frame. As opposed to all the teens from moves of that time the kids in this movie don't do anything particularly bad. They mostly just hang out, watch old horror movies, and occasionally go on dates that lead to sex monsters. They're all likable enough, and you want them to live no more than you want to see someone die. There was no character that I spent any amount of time wishing for (and planning) their untimely demise. So I guess before I go any further into why this movie was so great I should talk about the plot.

In a nutshell, the main girl (who kind of looks like Brittany Murphy) has a sister and an absentee mom. I only mention the absentee mom because her absence makes the way things play out a lot more convenient. If they had a mom who was really involved with her kids it would be much more difficult for them to run around the way they do. Anyway, the girl goes on a date, and bangs a dude (who looks like a cross between Joshua Jackson and the guy who played Dante in Clerks) she doesn't know that well. She receives the classic "does this cloth smell like chloroform?" knock out scene only to wake up tied to a wheelchair in some old burned out building. The dude then explains the story to her (and to us). A monster that can assume the appearance of anyone is following him at a slow walking pace. He can outrun it for a time, but it always catches up. And if it touches you, you die horribly. The only way to get rid of it is to sleep with someone so it goes after them instead, and you can still see "it" coming, but no one else can. So now the thing is after the girl, and she has to enlist her sister and friends to help her try to get away. What ensues is a mad dash from place to place trying to stay a step ahead of "it". Once the danger gets too close she has to consider whether or not to pass it on to someone else. Suddenly that guy with the chloroform isn't such a bad guy. I'd be banging half the city if it were me. But then once all of those guys die it'll still come back for you so I guess you have to be kinda strategic about who you get it on with. Unless you bang half the city to get a REALLY good head start, but then you still have to keep running forever. So scratch that; I'd fuck a whole military base if that shit was after me. I really don't think there'd be any slut-shaming in that particualr instance. Anyhoo, the kids get all A-Team and come up with a plan to trap the thing. The movie loses a little steam here, but then they pull it back together for a really fantastic finish. 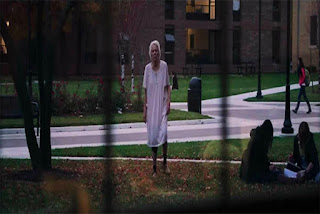 The sort of grainy style of the film contributes to the overall tension and suspense of the film. As well as the super moody score that reminds me of a Carpenter movie. Even the fact that the kids watch really old horror movies on crappy old television. Like I said, the only thing that really gives it away as modern is the weird e-reader, and possibly the fact that the girl with glasses is reading The Idiot. Teens in the 70's didn't read much Dostoevsky in scary movie situations. At least not in the movies I saw. There were a few good jump scares, but for the most part it was just a good long slow building tension.
There are rumors of a sequel, and word is that they're just going to flip the title to Follow It. As I understand it the girl or a new girl would be trying to trace the curse back to the source to stop it once and for all. Super idea for a horror movie in general, but even better if it follows this premise. Pun sort of intended.
In conclusion, this isn't just a cautionary tell about having sex with someone you shouldn't. It's about that a bit, but it's also about trust and the morality of passing your baggage on to innocent people. Everyone should see this movie because it's probably the best horror movie of the year. I really hope they do a sequel, and that they don't give it such a big budget that it loses the grittiness and heart of this awesome creepy movie. 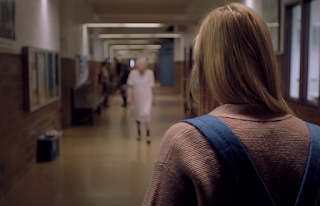