31 Days of Halloween: How To Survive A Horrow Movie Book Review 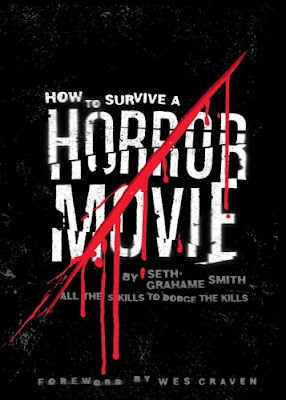 Has anyone seen that hilarious Geico commercial with the idiot teenagers running from the psycho killer?  They see the still-running car, and the kids says "Are you crazy?  Let’s hide behind the chainsaws!" And that’s exactly where the little morons go.  Even the psycho killer stops, stares, and shakes his head.  He's even ready to just say, "This is pathetic and no longer fun for me.  Next."  I could watch that commercial over and over again until I pee my pants from laughter because it outlines why most horror movies don't hold suspense for me anymore since all the morons behave this exact same way.  My husband and I have come to predict who will die, in what order, and how (with the exception of the Friday the 13th reboot with Jared Padalecki.  The last few minutes of that movie total went against horror movie formula!)  But this book, ladies and gentlemen, will help you to fight against the horror movie stereotype.  If you are ever trapped in your own horror movie, this book shall help you get out the other side alive.

It's called "How to Survive a Horror Movie," by Seth Grahame Smith, and this book just might save your life.  It won't, however, save your underwear.  You'll pee your pants every time you read it, so
wear Depends, please.

My husband received this book before we were together and told me about how glorious it was.  He passed it to me at work one day and from the moment I opened it I was in awe.  The foreword was written by Wes Craven, which should solidify the awesomeness of this book for anyone.  Mr. Craven, God rest him, starts off the book with a long apology to all of the ditzy characters that he has killed in his long career.  To the people that he made ran upstairs instead of out of the house, the ones that he made fall asleep instead of staying awake, and to the heroes that fought to live until the end, but died anyway.  You had to chuckle at that one.   Then the book is taken over by the author who announces that you (the reader) have fallen hapless victim to horror movie fodder.  If while reading you are hearing eerier music, seeing fog rolling in, hearing strange creaking noises or receiving random phone calls, congrats!  You’re in a horror movie.  But don’t fret, the author assures.  The book is the perfect guide to helping you survive to the end of the “film.” 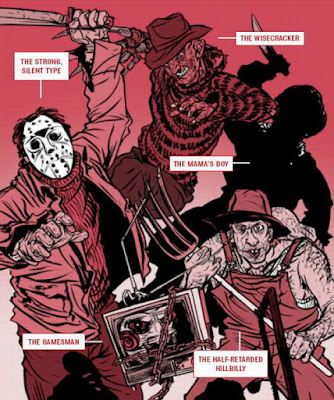 The book breaks down by chapter the different types of stereotypes that you see in every possible horror movie so you can know if you are experiencing any of these in your personal horror movie.  After all…you are trapped in one, so you have to know what you’re dealing with, right?  First chapter is a guide to helping you figure out what type of horror movie that you are stuck in, going so far as to break down your “supporting cast” so you’ll know your likelihood of survival based on them:  A:  The nice guy with the monosyllabic first name, B: The slutty goth chick, C:  The virginal Cop’s/Priest’s/Richest Man in Town’s Daughter, D: The Nerd, etc.  You’re cracking up by this point as you realize that all of these people are the token characters that bite it less than halfway through the movie.

This book is the ultimate survival guide that, quite frankly, you wish you could hurl through your television at every single poor soul that is destined to die in every horror flick you’ve ever watched.  The author (who, by the way, also wrote Pride and Prejudice and Zombies,) breaks down for you everything you could ever want and need to know starting with some of the deadly sins in horror movies:  1: Vehicular sex (there’s someone begging to be killed,) 2:  Being ugly (unless you’re in a slasher fic.  Pretty cheerleaders always bite it first,) 3:  Doubt (“It was only a dream,” or “Those are just stories,”) and many other such goodies.  Grahame-Smith breaks down the types of movies you might be trapped in while reading so you can I.D. your situation, from the slasher flick to the High-School horror (giving you the heads up to befriend the shop teacher…the best friend you’ll ever have in a HS horror,) a summer vacation disaster, to a typical ghost story (he says if you see the freshly dug graves, fresh mist fogging up the ground, and a lot of ravens, this cemetery is about to eat you alive.  Please leave this movie immediately and find a new one to jump into.) 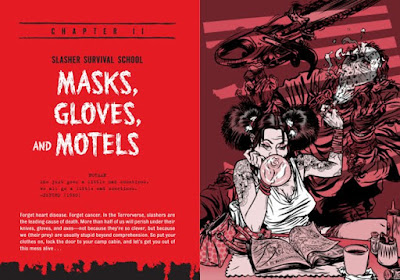 Ahhh…but identifying the movie isn’t enough.  You have to know what you’re dealing with and how to survive it.  Grahame-Smith breaks down your villains as well and the gear you need.  He dedicates a chapter to the types of slashers that you run into- the Wisecracker, the Mama’s Boy, the Strong-Silent Type, the Gamesman, and breaks down how to defeat each of them.  You have to be prepared, you know.  This was hilarious enough, but for me it could get no better than preparing for the ultimate evil villain: the tiny possessed doll.  The Chucky’s of the world, ladies and gentleman.  They destroy lives and lead to more sequels than ever imagined.  Grahame-Smith’s solution?  Kick it.  The thing is freaking two feet tall for crap’s sake.  If you can’t take down a two feet tall talking doll than you’re worthless and if I catch you reading any of my stuff on this blog I’m gonna come to your house and put a Corky or My Buddy and Me doll on your nightstand to make you crap your pants.

No horror survival could be complete without discussing how to survive the two ultimate stereotypes:  ghosts and slashers attacking helpless babysitters.  Babysitters were handled in the best way possible.  The author addressed their boobs.  That’s right, my friends…boobs are the enemy.  According to the author, boobs emit such a high-frequency sound that only horror movie psychopaths can hear them and when a horny boyfriend comes calling (such as idiots engaging in vehicular sex, one of those naughty sins we talked about,) or the morons coming to court the babysitter after the kids are in bed, they squeeze them tatas and boom, they send out a supersonic call to arms for all psychos in the area screaming “Come kill me…come kill me…” in boobtonics frequency.  So the solution is apparently well covered boobies, possibly strapped in with duct tape and covered with parkas or ski jackets at all times.  After all, it’s to protect the children.  Think of the children!

The chapter dedicated to ghosts, zombies, and the undead has what is quite possibly my favorite section in the entire book.  Besides helping you determine if the ghost tailing is a good ghost or a bad ghost, suggestions on building your zombie arsenal, and suggestions on taking care of the vampire problem (opening a 24 hour tanning salon as they always want to look pretty, but equipping the tanners with pneumatic stake drivers,) they have a checklist to help you determine if you have been dead since the beginning of the film.  Yes, there is a fine chance that the reason you have this book is because you didn’t stumble into this movie as a victim; you already were one, my friends.  They suggest attempting things like walking into the women’s dressing room if you’re a man, trying to poop and not flushing (if no one protests then sadly you have Heavenly waste,) going to Fenway and rooting for the Yankees, or my personal favorite, messing with Texas.  No one can mess with Texas and live, so if you can do that, then dude you were never freaking here for the duration of the film.  Sorry about your luck.  We’ll send flowers to your immediate family and send the royalty payment to the Graham-Smith.  I’m sure you weren’t alive at the time to pay for the book. 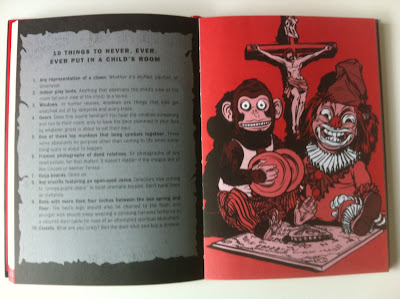 I’ve only scratched the surface of what makes this book great.  The author gives you tips and tactics on how to persuade the ever so doubtful local police, how to survive and alien attack, lists of animals in nature that are evil that you should avoid, evil items that should NEVER go into a child’s room, etc. He even interjects random pages into the book that he refers to as “Ejection Seats.”  These are specialized and guaranteed methods to remove you from the horror movie instantly as the events listed in them never happen in a typical horror movie setting.  For example, when a psycho is attacking you, slip em’ the tongue.  Boom!  You’re in a romantic movie.  When about to die…fart.  BOOM!  You’re in a high school comedy.  About to be eviscerated?  Pull a Wayne and Garth and turn to the camera, giving an awkward product placement.  Start advertising Coke or Pepsi, or selling your Samsung, and turn it into a commercial!  You’re home free!

This book is comedy gold and if I haven’t done a good job of selling you on it then I have failed in my mission.  It’s the perfect thing to sit down with during a good horror fest and compare/contrast.  You’ll be reading along and realizing, “Crap…this book is right about everything!  Loud mouth cheerleader…dead!  Idiot macho guy that kept shouting ‘Come get some!’….dead!  Two morons that went to make out in the woods…oh you know they’re dead.”   I mean geez…the back cover of the book should sell it for you, people.  The back cover of the book tells you that if you:  are reading this book at summer camp or in a cornfield, find Japanese children in your bathroom, are in an abandoned asylum, have accidentally killed a hobo or socially challenged classmate recently, or (for the Supernatural fans out there,) have friends that look suspiciously like the cast of Smallville and Gilmore Girls, then you are trapped in a horror movie and must read this book immediately.

If that doesn’t make you want to get this book than I have failed as a writer and I hang up my pen and toss out my computer right now.

Go to your library and check this book out.  Go to your bookstore or online and buy it.  Or borrow it from the bloodied man running down the street from the claw handed psycho chasing him screaming at you, “Read it!  Quickly!  Please….save yourself!”


Christina Sizemore is trained in only four things:  writing, fighting, paranormal investigating, and being a mom.  At this point in her life she truly feels that she is not qualified to attempt to learn any new field.  A twenty year martial artist, mother of three, and writer who is working on the publication of her first book titled “Finding Your Way: A Guide To Your Path In The Martial Arts,” she spends her days working out, writing, making fanvids, going to DragonCon, and playing board games/video games/out in the yard with her kids and husband who are just as geeky as she is.  She is convinced that one day her skills will be of assistance in the Zombie Apocalypse and that while she is of no use in the kitchen, she can Buffy that zombie for ya or teach you the best way to get the blood stains out of your clothes (Psst…the secret is mixing Crown Cleaner and Shout.  Just sayin’.)