31 Days of Halloween: Goosebumps and More! 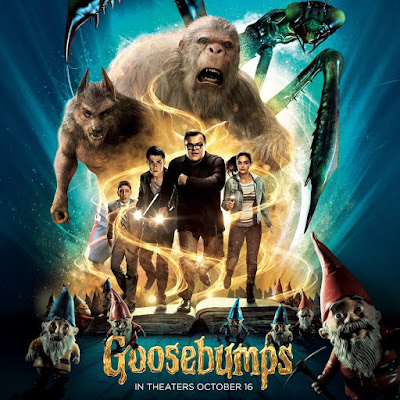 I took the family to see Goosebumps on opening night. I never watched the show or read the books because I was older when they came out, but my wife is a fan because of her niece and nephew and she and my son have watched a number of episodes on Netflix. I love it when we can all go and see movies together, so this was in the cards for a while.
All I really knew about the franchise was that it was basically kid-friendly versions of The Twilight Zone and Tales from the Darkside.

Going into Goosebumps I was suffering from a bit of Jack Black fatigue. I still like the guy, but I’m not necessarily excited about seeing him in anything. I will say that what I had seen of his portrayal of Stine in trailers had me interested. He didn’t seem to be playing Jack Black, which was refreshing.

He is, indeed, doing something very different. There are moments where he can’t help but be who he is, but for the most part Black is playing a vulnerable, tightly wound man whose biggest concern is not himself. Some folks have complained about his erratic accent, but to me it came across as someone that had spent their entire life being uncomfortable, guarded, and isolated. He never quite knows who he is in the presence of others.

The rest of the cast are great. Dylan Minnette and Odeya Rush are compelling and enjoyable to watch onscreen – not at all the annoying kids you sometimes see in these types of movies. Amy Ryan is, of course, awesome as Minnette’s mother. Ken Marino shows up for approximately forty seconds of screen time and is, sadly, wasted. Ryan Lee is the screeching kid in the suit from the ads and he is awesome, but the real comedic standout to me was Jillian Bell as the aunt.

I don’t know which Hollywood forces decided to put Melissa McCarthy over so hard, but Jillian Bell is worth ten of her. I want to see her in more movies, stat. Every second she is on screen she is stealing the effing show.

The story is super, super basic, but serviceable. The real draw of Goosebumps is seeing just how many of Stine’s creations can be jammed into one movie and how well they can be represented on the screen. I have to admit that they killed it in this department. The monsters and ghosts and deranged lawn gnomes are all a blast to see in action and their individual encounters are each memorable scenes. Despite the heavy-handed use of CGI, I was never taken out of the movie because the tone and style do not call for realism. This is a kids’ movie, not The Shining.

I recommend you take the family to the theater and see this one as part of your Halloween fun. It’s satisfyingly spooky in an utterly benign way and the cast is truly delightful.

Speaking of satisfyingly spooky, I also recommend R.L. Stine’s Monsterville: The Cabinet of Souls. It’s also very youth-oriented, but the tone absolutely nails late 80s/early 90s Halloween television specials. It’s full of terrible music, teen angst, and spooky fun.
All in all, the Goosebumps television show – available now on Netflix – is the best. I’ve watched a bunch of them now with my son and while the show is as uneven as any horror anthology and some of the effects make classic Doctor Who look like a James Cameron movie, it has all of the spooky elements that the movie was missing. There are some genuinely disturbing and suspenseful moments in the show – things that had Phantom, Jr. on the edge of his seat with his eyes bugged out. And he freely admits to enjoying that experience more than the fun of the feature film.

I think the original Creature from the Black Lagoon is what sparked my son’s interest in horror. He’s grown up with all of the horror toys down in the Phantom Zone and has characters he likes based on those – Jason is one of his favorites and I can’t wait to show him those movies – but something about Creature got him. We watched the original and then the sequels over the course of a couple of days and he ate them up.

I think his next creature feature was Ghostbusters, followed shortly thereafter by Gremlins. Both seem relatively benign now, but for a seven year old they’re pretty heavy. I was nine when they came out and both had moments that made me nervous.

I let him talk me into letting him watch Troll recently. It’s more fantasy than horror, but I didn’t think it was a good idea, as I had seen it when I was ten and it freaked me out. But something about the preview screens on Netflix caught his eye and he made a compelling argument that we could turn it off if he got too scared. So one afternoon when Mrs. Troublemaker was out we watched the whole thing and he loved it.

Finally, just between you and me, I let him watch part of a documentary on KNB EFX recently – Nightmare Factory. I was watching it on Netflix while working on something downstairs. He came down to ask me about something and I paused it, but not before he had seen one of the vampires from From Dusk ‘Til Dawn explode. He was clearly interested, but this was not for him. I answered his question and he went back upstairs.

Just a few minutes later he came back and I was in the midst of editing or something, so I didn’t think about pausing the movie. Next thing I knew ten minutes had passed and he was sitting in the recliner in front of my desk watching Greg Nicotero explain how to make intestines explode out of a dummy. I paused it and we had a talk about how all of this stuff was fake and was how they made things in horror movies. He seemed pretty savvy about it, so I resumed the movie, keeping a watchful eye out for anything too over-the-top or outside of the context of the FX studio. Eventually I had to cut it off for something or other that was just too extreme, but in the meantime he was fascinated.

I kept up with him over the next couple of days to make sure he wasn’t having nightmares or anxiety and he was totally fine. As a matter of fact, he didn’t suffer any nightmares until the night after I finally let him watch Batman Begins. He woke up screaming about how it was a lousy Batman movie because it was too realistic for Clayface or Poison Ivy or Mr. Freeze to exist.

Just kidding – the demon Batman that Scarecrow hallucinates freaked him out.

I’m excited that my son is enjoying things that are spooky and scary and is seeking them out. Some of the best stuff is years away, but I’m looking forward to introducing him to all of the classics that I discovered on my own as I grew up.

Posted by Phantom Troublemaker at 6:00:00 PM