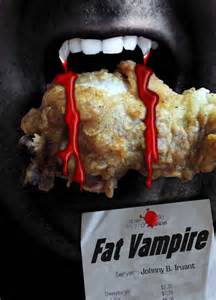 I first discovered author Johnny B. Truant a few years ago. Even though Truant is a writer, that is not how I first found him. Oddly enough it was through podcasting where Truant is one of the hosts of the Self Publishing Podcast and the Better Off Undead Podcast. SPP as it's commonly called is for aspiring writers which includes tips and interviews with other authors. On that show there are three hosts which include Johnny, Sean, and Dave. All three are authors that collaborate with each other and Sterling And Stone is their company. They also do solo projects as well. I have followed the podcasters for years but have never read any of their work which has been a mistake on my part. Well, due to one of the books being free on iTunes, I finally changed that.


The book is a solo venture by Johnny B. Truant entitled Fat Vampire. Apparently, the idea itself was born on the podcast, so Truant ran with the pretty obvious premise and created a series. This is a look at the first in the series so because of the subject matter I thought it would be a good addition to 31 Days Of Halloween here on Needless Things.

Just by the title alone you should be able to tell what this story is about, indeed it is about a Fat Vampire. Our main character is an overweight office worker named Reginald Baskin. He is a relatable character, especially for the nerdier kind. At his work place he feels like he doesn't belong while being picked on by the other co-workers. The other people in the office think Maurice, who works the night shift, is a very odd person who carries a sword on his belt. Eventually, the two of them decide to be friends which Reginald didn't have so it was a nice change of pace. What seemed to be a normal trip to the bowling alley suddenly changed Reginald's life forever. That is the night he became a vampire.

From there we get a terrific relationship between Reginald and Maurice that Truant really grows throughout the story. I wasn't the biggest fan of Maurice but by the end, my opinion had changed. The author does a terrific job creating his own lore of the vampire myth. It turns out Reginald should have never been turned into a vampire because he was not in the right state of mind or body for the commitment. So, he has to stand trial with the Vampire Nation while Maurice also faces possible punishment. For a book that doesn't even have 50,000 words, it's pace is perfect by starting off slow but being action packed at the end making me not want to put it down until I finished it.

There are four main characters and which I have revealed two of them, I will save the other two for when you actually read the book. As a human, Reginald didn't have many friends but it turns out as a vampire he connects to people better. You will be rooting for all of them by the end of the story which has an ending that I honestly didn't see coming. Not because there is a twist necessarily but because its just damn good story telling.

While the vampire craze has sort of faded a bit this book should not be overlooked. It's not a Young Adult book, its very much for adults but nothing too over the top. The main audience would have to be adults if I was categorizing it. Since this is the spookiest month of the year and a time where people are looking for something to read, I highly recommend reading Fat Vampire by Johnny B. Truant. There is a total of six books in the series, which all have clever names, Fatpocalypse being my personal favorite title. I am getting ready to start the second book soon which is nice because I haven’t really been reading much lately but this book has definitely got me hooked. Go ahead and give it a shot, the first book is free for your e-readers and if you dig it, then the rest of the series has a perfect price tag for the box set.

Richard Ewell is a nerd and self published author. While also being Needless Thing's resident Lego fanatic & reviewer. His first novella Fat Trapped was released in 2013 introducing the horror world to The Blankenship Family. Some random likes of his are the Batman villain Bane, Jeff Smith's cartoon epic Bone, and the 80's BMX movie RAD.