31 Days of Halloween: Dead of Winter Board Game Review 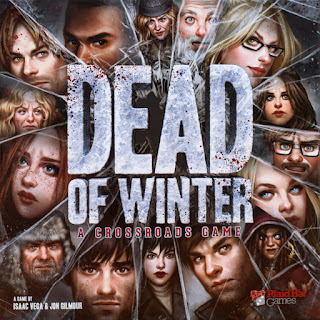 I have raised my family to be very…unique.  My oldest was quoting the Green Lantern oath at the age of seven.  My middle child sleeps with a Batman pillow.  My three year old roots for Harley Quinn.  I’m proud of my geek children.  So, while watching Wil Wheaton’s Tabletop channel, I felt my pride swell when my teen decided that a game that they played during one episode involving surviving the Zombie Apocalypse not only seemed fun, but a moral imperative to own.  I have raised my children well.  Her birthday this October granted her dearest wish, and we rang in the Halloween month right by surviving zombies, frost bite, raiders, and a colony traitor out to destroy us all.  Welcome to my review of the survival horror game, Dead of Winter.


Dead of Winter is a co-opt game, which in short means that the game is out to kill you.  You work with the other players to achieve a singular goal.  In the case of Dead of Winter, it’s the middle of winter and the undead have arrived.  The Zombie Apocalypse is here and you and the other players are the survivors.  Sequestered in the middle of the board (the Colony) you attempt to survive whatever the game throws at you while trying to search outside the Colony at places like the Grocery Store, Gas Station, and Police station for food and weapons.  Sounds simple right?  Hehe…wrong.  So very very wrong.  As a group you have a main task to achieve, which is the core of that round of the game.  Each game story varies in length depending on which you choose: this game can be ninety minutes to three hours, people.  Awesomesauce.  This main story objective requires that you obtain certain items (ranging from food, medicine, tools, and/or weapons,) recruit certain followers, deliver items to certain places, etc.  Along with the main objective and what each entails, however, each player has individual objectives that they must achieve within the Colony.  They cannot tell the other players what they are required to do.  It can be as innocuous as building extra barricades around the Colony to keep out more zombies or recruiting a specific survivor to your cause.  But wait…there’s even more!  There are individual objective cards listed as “BETRAYAL.”  That’s right, ladies and gentlemen…you might draw the card that states your job is to turn on your fellow survivors and kill them all for your own twisted end game.

In this game, no one can trust each other.  You always suspect each person you play with. 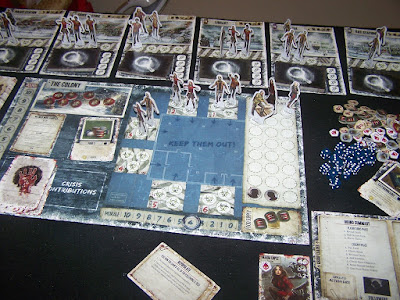 Now that I’ve whet your appetite, let’s go over a few points of play and examples.  The game has dozens of playable survivors to choose from.  Each card has a name and job title from pre-end-of-the-world days, along with stats on their card.  The stats display their 1:  influence in the Colony, 2:  Fighting ability if attacked, 3:  ability to search for and find helpful items.  They also have a specific ability at the bottom of the card that can be activated on certain occasions.  Once the board is set up you pick from the player cards that you drew, deciding which of those you want to keep as your “Leader,” because among the Colony you can have your own groups that organize to go out and search, scout, etc.  This leader can gain his own followers over time as the game continues.  Each player has actions that they can perform.  On each turn they can decide to either build a barricade on the outer doors of the Colony to keep zombies out, leave to search for what they need for the game objective, search for food if needed, or look for what is needed for the Crisis Card. 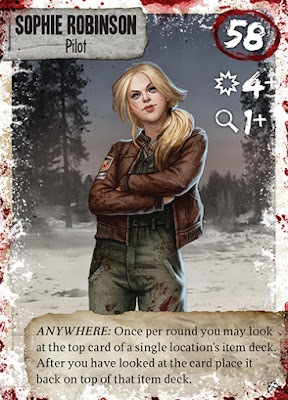 Ah…the Crisis Card.  Or as I like to call it, the “Wrench In The Works.”  Each round you get one, and it’s a random horrible thing that befalls you all.  Raiders attack and try to steal your food.  You run out of fuel and have to collect more.  Zombies start pummeling the building.  Mutiny ensues and you have to decide whether to shoot a mutineer to prove a point to quell the mob through talking.  By the end of the round the matters on the Crisis Card have to be resolved and any/all supplies required to resolve them must have been gathered and put into the crisis card’s pile in the Colony.  This is a way to determine if there is a traitor in your midst.  My last game for example we needed seven fuel; we gathered six fuel and one “pile of junk” card.  Someone sabotaged us.  Someone turned on us and caused more zombies to flood the compound as a result. 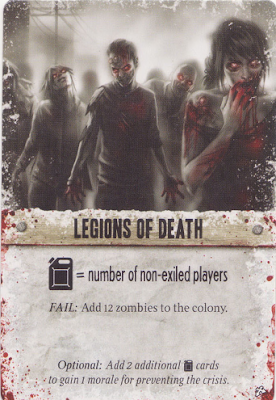 Small things come into play as well that affect the game and make it realistic.  Morale goes down if the waste builds up, which happens as survivors eat food each round and the food cards go to the waste pile; you have to take out the trash.  Anyone that leaves the Colony to search for supplies has to roll a special dice with symbols that dictate frostbite exposure, zombie bite, etc.  If you are lucky and roll on the blank side you got nothing.  If not and get exposure damage, then the clock is ticking for you.  After so many frostbite tokens you get a wound.  After so many wounds your player card dies.  If bitten by a zombie when attacked you are infected and can spread it to other characters; stay away or you’ll kill us all!  Unless, you are the traitor, and you’re trying to kill us all… 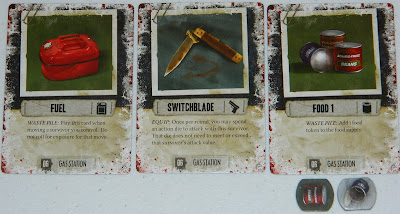 The objective cards will make the games round length vary.  One game might have 5 rounds or a longer one might have 10.  But by the end of the game you have to have everything accomplished:  all the supplies the game requires, the right amount of morale or higher, etc.  However, if there is a betrayer in your midst and they accomplish their individual task before you do…game over.  They win and they have ruined you all.  The last humans on earth are no more and the crazed human psycho stands alone to rule over the undead, laughing maniacally.  They even get to read a specific journal entry from the rule book about their storyline based on what type of Betrayal card they chose (mad scientist, obsessed psycho, etc.) 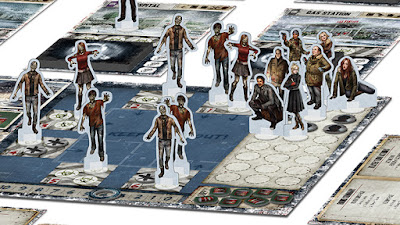 It’s survival.  It’s horror.  It’s killing the Mall Santa to get ahead (no kidding…his special ability suggests you kill him.  Hilarious.)  The game leaves you never knowing who you can trust in what is left of the world and leaves you not only fighting for your life outside of the Colony, but watching your back while you are inside of it.  You will never look at your friends and family the same way again after playing this with them.  Of course you’ll want to play it again and again with the backstabbing, lying little traitors, but that’s another story altogether.