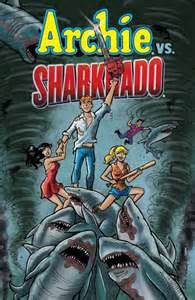 Archie Comics has taken yet another gamble at mixing Riverdale's favorite teenagers with something that nobody saw coming. I mean really, can you honestly sit there and tell me that you could have seen this one shot starring the SYFY phenomenon coming. That's right, straight from your television screen to your comic book pages we have Archie vs Sharknado. With the popularity of Afterlife With Archie and Archie vs Predator it was inevitable that we would get something just as odd from the publisher. However, I don't think with a hundred guesses I would have selected Sharknado as something that would crossover into the Archieverse.

Like most of the smaller publishers, multiple covers are done to produce more money by making comic book stores buy more issues which consequently causes the readers to buy more issues. The cover I got seemed to be the most common one as I did not see another at the store I frequent. The cover parodies Army of Darkness if I am correct which is not the only inside joke that this issue includes. As far as I am aware of this is indeed a one shot.

I don't really think we needed this one shot let alone an entire series of the gang vs sharks. That's not to say its a bad thing, its just hard to capture what the Sharknado phenomenon has going for it in comic book form while mixing with Archie and his friends. I think if you want to take Sharknado to the pages of comic books, they should use SYFY's original characters while mixing with celebrities just like the movies do. Now, I will confess, I watched the first Sharknado. I found it mildly entertaining but didn't get the craze. I missed the second one somehow but was able to catch the third movie. I'll say this about the third movie. I found it extremely entertaining, for all the cheese and over the topness that it offered.

That being said I wasn't very excited about reading this one. Maybe I'm on a bit of Archie overload but I just wasn't enthused about reading this latest crossover. This comic came out around the time Sharknado 3 hit the airwaves in order to capitalize on the (surprising) success of the franchise.

So the story starts off acknowledging that Sharknados do exist which kind of took me off guard. I figured it would be a brand new story but it was kind of a continuation even referencing the events from the movies. We have a very Betty and Veronica centric storyline that focuses heavily on them. At the beginning they in Washington at a protest trying to save the sharks because people suddenly want to kill all the sharks so that Sharknados will go away. This seems to be tackle a very present debate in our everyday life but I won't get into that political issue. Well, as you might as guessed the Sharknados interrupt the rally and the carnage begins.

If you have been reading the predator crossover and the afterlife series, you will know that the writers of these books are not afraid to kill off major characters. I will admit, at first this was kind of cool and shocking but after a while if most readers are like me they are becoming desensitized to the gory demise of these beloved characters. The shock value is taking its toll on good story tell I am afraid with some of paths the company is deciding to take. If they really want to be shocking then have a storyline where Betty and Veronica are not swooning over Archie for once.

Eventually, the girls head back to Riverdale to try to warn the gang but alas they are too late. Sharknados have arrived and are tearing through the streets and the people of Riverdale. There isn't much of a storyline here except the characters trying to figure out how to stop the Sharknados which not to be a spoil sport but by the end of the issue, they achieve. You have all of your regulars in this issue that do their characteristic thing. There is even Jughead trying to kill one of the sharks because it stole his crown. Yes. You read that correctly.

The issue is done in that classic Archie style but with much more blood and gore than the classic series offered. In a comic named Archie vs Sharknado, I knew what I was going to get. It was a fun, mindless read but its hard for me to recommend for anyone to pick it up. Unless you are this huge Sharknado fan and must have all things surrounding the franchise. Or if you like seeing the Riverdale gang dismembered and torn apart by sharks but if you like that you should just pick up the predator crossover or the afterlife series. Those comics do a much better job than this issue does. I was surprised by the amount of easter eggs that are in this one. I could tell that the writers had fun with this one but in the end its one that wasn't needed.

Richard Ewell is a nerd and self published author. While also being Needless Thing's resident Lego fanatic & reviewer. His first novella Fat Trapped was released in 2013 introducing the horror world to The Blankenship Family. Some random likes of his are the Batman villain Bane, Jeff Smith's cartoon epic Bone, and the 80's BMX movie RAD.