31 Days of Halloween – Aliens Are the Worst 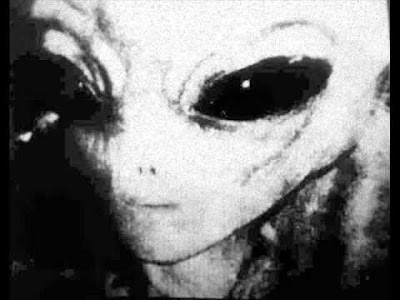 I am more terrified of aliens than I am of anything else. I discussed this a bit on Episode 34 of the Needless Things Podcast, but I felt the topic warranted a little more in-depth investigation.

The first conscious memory I have of this fear is from the night I saw E.T.: The Extra-Terrestrial in the movie theater. I was six years old in 1982 when I saw it. I felt an extreme unease as Elliot made contact with the creature. All I could think was, “Do not let that thing into your home.” As the movie went on and it was shown that the creature seemed to have no malicious intent I relaxed a bit. I still wasn’t at all comfortable with this boy hanging around with this creature, but nothing bad seemed to be happening. 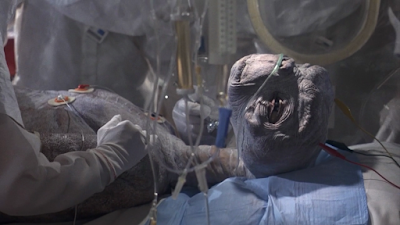 And then the creature became ill. That illness caused it to lose pigment, turning a pale, white color. And the first sight of the creature with its grey-hued skin drove a spike of terror into my spine that I can never forget. An intense, primal feeling that was beyond fear or any conscious feeling whatsoever; a state that could only be described as raw screaming, tears, tension, and a complete shutdown of the body’s ability to function. I know this feeling because I have experienced it – if only briefly – several times in my life. Each time this state has been triggered by images of Greys and there is nothing else that has prompted an even remotely similar reaction.

When we got home that night I refused to leave the car until my dad went into the house to make sure there were no creatures inside. I slept with the light on for months. I wouldn’t open the closet. I jammed blankets and stuffed animals and toys under my bed so there would be no space underneath for something to hide.

Even writing about this right now, surrounded by people and during the light of day I feel a shadow of that fear along my spine.

Eventually the fear receded from my conscious mind and I was able to turn the lights off, but only with a nightlight plugged in. I started to use the closet again. I cleaned out the space underneath the bed. I have never forgotten the terror that E.T. evoked in me, but its immediacy faded. To this day I still cite it as the scariest movie I have ever seen. Not for the content of the film, obviously. It is not intended as a horror movie or a thriller and does not function as such. But no other film I have experienced has had the same impact.

Others have had the same effect, though.

I think the fact that I was a child when I saw E.T. is what made that experience the most traumatizing, but I have felt that same spike of terror on a few other occasions. I was just older and slightly better able to cope. Now that I have a seven year old son of my own I have a new dimension of perspective on that experience. It seems somehow even worse now, because added to my own terror is the fear that my son might ever feel what I felt. I don’t even have recollections of what might have triggered that state in me, but just the thought that my own son could feel that is unsettling.

After E.T. I spent years avoiding movies about aliens.

Actually, this would be a good point to specify. I avoided movies about Greys. I have no particular anxiety about other extraterrestrial life forms. But if they have the features normally attributed to Greys – large eyes and heads, small mouths, spindly limbs, and pale skin – I get freaked out.

As I’m writing I’m remembering my experiences with movies featuring these sorts of aliens, and one of the first that comes to mind (after E.T.) is Spielberg’s Close Encounters of the Third Kind. That movie disturbed me and it didn’t even show the aliens until the end. And yes – I know that the events leading up to that point are meant to be mysterious and unnerving, but the scenes in the house and the truck really got to me. I was aware of what the movie was about. I was into cryptozoology in a HUGE way when I was a kid, so I was very familiar with what a close encounter of the third kind was.

I’m sure I didn’t do myself any favors by reading everything alien-related I could get my hands on. I would go to the elementary school library and check out every book about supernatural or unexplained phenomena I could get my hands on. The subjects could be anything from the Loch Ness Monster to Bigfoot to crop circles. I’m sure I read every book on weird happenings at least thrice.

I would go on to read about the Betty and Barney Hill Abduction, Men in Black (no – not the movie), and would eventually discover the works of Whitley Strieber. Reading Communion and watching the film adaptation are probably some of the dumbest things I’ve done, as I knew better and did it anyway. While they didn’t cause as much trauma as E.T., I spent a year or so absolutely haunted by what Strieber had related, as preposterous as some of it was.

Watching Fire in the Sky was another dumb decision. Again – I knew darn well what it was about, but for some reason was compelled to watch. I was rigid through the whole movie – almost literally scared stiff.

Since then I’ve avoided alien stuff for the most part. Every once in a while something will surprise me – like the excellent and terrifying final sequence of V/H/S/2 – but I don’t knowingly go into such things. As curious as I might be about The Fourth Kind or Dark Skies, I’m not gonna do it. I’ve lost enough sleep to those little creeps.
Posted by Phantom Troublemaker at 11:00:00 AM

Email ThisBlogThis!Share to TwitterShare to FacebookShare to Pinterest
Labels: 31 Days of Halloween, aliens, fear, halloween, tales from the troublemaker