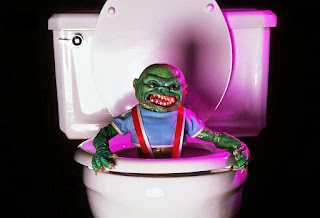 Ah 1985. What a great time to be a child with a penchant for horror and permissive parents. (I know it seems like all I do is watch and talk about horror movies. I swear I have other interests. Just not many that can get me going on a long, drawn out diatribe like scary movies do.) A lot of really good (and really bad) horror movies came out in 1985, and I thought it might be fun to take a look at a few to see how they've held up. Some are still great, a few haven't held up as well, and several were pretty terrible to begin with. There are definitely more that came out that year than I have time or inclination to talk about. I'm pretty much just going to cover the ones I liked, were the most memorable, and of course the very worst of those that I've seen. Let's go with alphabetical order since the seems most fair.

I'm a big fan of scary anthologies - from Creepshow to The Simpsons Treehouse of Horror because at least one of their segments generally has a good payoff. Not so here. It's not bad per say, but there were never any scares here. The James Woods quitting smoking bit is still decent. If you're a fan of comeuppance and irony forget about it; otherwise it's just a young Drew Barrymore and old-timey green screen effects with trolls. If you like young Drew Barrymore stick with Firestarter. If you like trolls then I dunno watch the 1986 movie Troll, but don't blame me for it's sucking. 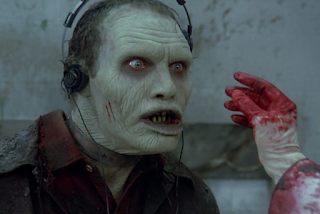 Day of the Dead
The third of Romero's Dead movies, and should have been the last if you look at Land and Diary. As much as I love giving money to "Uncle George" I don't want anything else like either of those two. This one wasn't cool to me at the time because I wanted exciting dead bodies (see below for Return of the Living Dead), not scientific/political diatribe. I like it better now because I don't mind story in my zombies as much as I used to. It's still not as good as Night or Dawn, but I do like Bub the zombie. I saw him at Walker Stalker Con last year, and I couldn't think of anything to say to him. I felt really bad about it though because no one was at his table. It's sad how the classics get forgotten. While not huge on the gore or suspense it's still not bad. And the opening sequence with the helicopter looking for survivors is the balls. 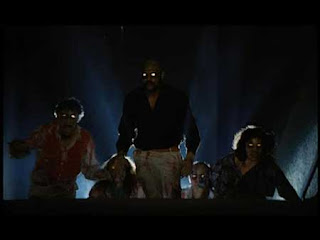 Demons
Produced by Dario Agento and directed by the son of Mario Bava this campy gore-fest has big time Italian street cred. It's honestly one of my favorite horror movies ever, and certainly my favorite of the year. I've been trying to pick up a copy at various cons for years, but I guess I'm just gonna have to fork out for large shipping costs and get it from Amazon. It's sadly not well known enough to be easily available in the states. If you can get hold of it though I promise you're in for a good time. It's silly and euro-trashy, but it's totally fun. I can't recommend the sequel as strongly. It's still good, but not quite up to the original. For those of you who care though, you can see a 10 year-old Asia Argento making her screen debut. I'm sure that would get Mr. Tibbs to sit down for a viewing, but it'd feel creepier than anything in either of the movies. My husband is weird.

Friday the 13th: A New Beginning
Sort of new I guess. It pretty quickly turns in to more of the same, but at the start of the movie it seems like it might be different. Older Corey Feldman (not really Corey Feldman, but the character he played in the last movie grown up)  brings Jason back to life like the big idiot he is. Things, mostly terror, ensue and the whole franchise gets it's legs back under it. I guess I can't complain because if it hadn't kicked back off I wouldn't have gotten to see Jason X, and that was amazing. I don't use that word lightly my friends. 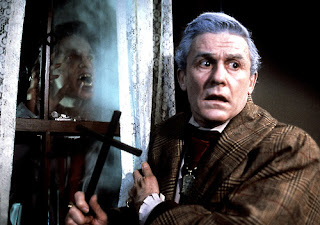 Fright Night
Did you know that Needless Things regular and Dragon Con party machine Ryan Schweck was once known as Evil due to his resemblance to Evil Ed from Fright Night? I never saw the likeness, but I called him that for a really long time just due to appreciation for a reference to this movie. Like many of my friends with nicknames I honestly didn't know his real first name for the first several years I knew him. That being said I still do really like this movie. The remake wasn't bad, but if that's all you've seen I urge you to check out the original. The overacting of both Roddy McDowell and Chris Sarandon make this movie a thing of beauty.

Ghoulies
So this falls under the "not good then. Not good now" category. Still, if you want something light that won't tax your mind with story or freak you out with realistic gore then you might like it. It's a stupid plot, a stupid story, and has some of the stupidest dialogue ever. Yet somehow, it's still amusing if you haven't seen it before. If any horror movie ever was going to make you afraid of using the toilet I assure you it's this one. I don't know if that's praise or not so I guess you'll just have to go watch it and decide for yourself. I knew of Ghoulies 2, but when I was doing research for this article I discovered they did 3 and 4 as well. I can't speak for any of those so don't some crying to me if you get sucked into a Ghoulies hole. 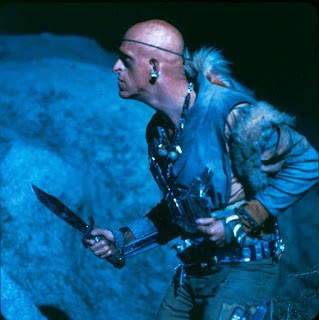 The Hills Have Eyes II
Our old pal Toxie is back (not really, but it's the guys who played the Toxic Avenger and that's how I always refer to him) to torment and murder hapless suckers who wander around an old government bombing range for no reason. If you're going to stumble around the desert in the dark expect mutant bad guys to kill you. What about that isn't obvious to people? I think I may have actually seen this one before the first movie. It was nearly as good as the first, but still much much better than the remakes. They were piles of crap, and not the good kind.

A Nightmare on Elm Street 2: Freddy's Revenge
Or the movie that could have killed the franchise. They decide to make a big departure, and have Freddy posses a dude to do his killing for him. Since Freddy is already dead and attacking from beyond the grave in the first movie having him need a patsy to do his dirty work is just lame. After loving the first movie so much I was terribly disappointed by this one. I'm glad Wes Craven didn't have anything to do with it. If you're a completionist you have to see it, but I don't recommend it as a good example of the series. I say skip it, and move on to the much more enjoyable Dream Warriors which is the third installment. It gets things back on track, and is much more fun to watch. 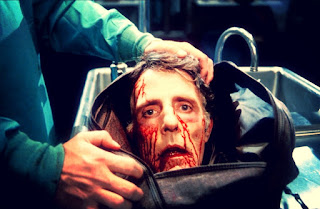 Re-Animator
I love love love this movie. Then, now, and always. It's based on an H.P. Lovecraft story, but I don't think he'd envisioned the silly turn this movie takes. It's gory and weird, and very campy. If you've seen it and didn't appreciate it keep watching it until you do. It has everything. Mad science, zombies (the don't call them that, but what else do you call a reanimated corpse?), disturbing sex scenes with severed heads. Literally everything. Even Roger Ebert kind of liked it, and he was a tough man to please. 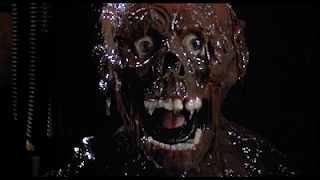 The Return of the Living Dead
I still watch this anytime it comes on TV. As far as I can recall it's the first time zombies went around calling for brains. I love the idea that burning a zombie causes whatever it is that makes the dead come back to life to be released into the atmosphere affecting everyone. There's also a naked Linnea Quigley (Silent Night, Deadly Night, Night of the Demons, and many other horror movies) dancing on a grave while fantasizing about old men ripping her apart. Her character's name is Trash so I guess it's to be expected. And the first zombie of the movie is actually a little creepy the first time you see it. It has a decent soundtrack featuring The Cramps and The Damned too. Some of the following sequels are pretty good, but they get worse as they go on. Mr. Tibbs and I still quote it which is praise indeed.

Silver Bullet
I remember enjoying this at the time, but it doesn't hold up very well. I won't give the special effects too hard a time given what they had to work with back then, but it just seems silly now. I don't think it scared me, but there may have been a few creepy parts. I think the toughest thing about watching it now is knowing what trainwrecks Corey Haim and Gary Busey became. And in Busey's case, still is. Everett McGill is a good sport though, and gives more to his performance than was really required. But I can't look at him without thinking of him as Ed Hurley on Twin Peaks. Maybe that's the problem with watching this movie now. Everything reminds you of something else so you don't even notice what's happening in front of your face.

The Stuff
Last and least of the horror movies of 1985. I wish we could have ended with something good like Return of the Living Dead or Re-Animator. Damn alphabet! So suspend the shit out of your disbelief, and assume that the FDA would allow someone to mass market an unknown substance as a dessert item. Sure, why not? I know that people will eat all kinds of crap that they can't identify or know is bad for them, but come on. How does this movie have a 70% rating on Rotten Tomatoes? At one point goo comes out of a mattress and kills a guy. It's like The Blob, but dumber. It does have a good cast though, and if you've never seen or heard of it, and there's absolutely nothing else on TV ever you could probably do worse. Just remember, I warned you.


Speaking of something on TV, FXX is doing Treehouse of Horror marathons all week. And for you premium cable subscribers don't miss Ash Vs. the Evil Dead premiering Halloween night. Be sure to make friends with someone who gets Starz by then!