Things I Will Miss At Dragon Con 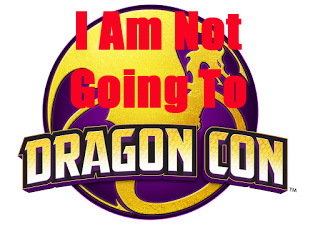 As you can tell by all the amazing coverage and podcasts that have been posted here on Needless Things, this week is the con of all cons, Dragon Con. Dragon Con is without a doubt a nerds home away from home. For a lot of people, it is home which has been stated by many people including myself. I have only been two times to the convention and the second time which was last year was such an incredible experience. Words simply can't do it justice.

Just a few months ago I thought I was going to be able to attend but alas due to circumstances beyond my control I will not be able to go. I'm sure I am not in this boat alone. There must be many others that want to go very badly but for different reasons will be watching all the fun on various social media accounts.

So with all the awesome posts going up on the site about what they wanted to see at Dragon Con, I thought I would write one about a few of the things I am going to miss. This might also give people who are going an idea of some things to do.

Before I went to Dragon Con in 2014, I only mildly enjoyed panels. Sure I went to some but it was out of boredom and not usually on purpose. This changed last year when I went to the Sci Fi Classics track, namely the Ghostbusters panel which was on Thursday, I believe at eleven o clock at night. It was a packed room of people that all had a love for one fandom and that intrigued me so much, I hunted down as many panels as I could the rest of the weekend. The Sci Fi Classics track had the majority of the panels that I enjoyed including their Roll-A-Panel which was just a blast surrounded by like minded people.

Another panel that was right up my alley was the LOST panel. Yes, this was a panel that was packed with people talking about their favorite show LOST. It's one of my all time favorite shows that deserves its own article one day, and in that room I wasn't alone. We laughed as the two hosts opened up the floor to questions and discussions about everyone's favorite character, episode and the ending which got a lot of eye rolls.

I will miss these panels and others including the Sci Fi Classics Track panel on the Disney Afternoon which is happening this year. I highly recommend these fan panels, sure some of them may not have the big celebrities but I find these to be much better.

This sounds dirty and if you want it too, at Dragon Con it can be but after hours is just the best. What I mean by after hours is long after the dealer, celebrity, and comic rooms have closed, the night life begins. Just hanging out in any of the host hotel lobbies can be a blast even if you don't have friends to hang out with. I promise if you want too, you will meet people at Dragon Con, it happens all the time. But more importantly you will be able to see thousands of costumes and possibly wear your own costumes if you are into that sort of thing. Which I highly recommend that by the way.

There is such a variety of randomness that includes music, dancing, and shows all of which can be impromptu by con goers and not official programing. It might be a random guitar player or tap dancer that catches your eye while providing entertainment.

I am an avid listener to podcasts. I have about fifteen that I listen to on a regular basis. Most of those podcasts are on the ESO Network which if you are reading this, you probably know that the Needless Things Podcast is on the Network. It's flagship show is the Earth Station One podcast which is fantastic and listening to the groups over the years it really makes me feel like I am part of their group. Some of them don't even know me but they feel like old friends when I see them. In fact Phantom Troublemaker and I have only met for approximately fifteen minutes total in real life but I consider him a good friend.

Last year I had the pleasure to go to the ESO meet up and hung out with Director Faber and Howdy Mike and some of the others that have been guests or regulars. They have always been very kind and awesome in welcoming into the group. I will miss seeing friends that I only know on a one sided or social media basis.

Even though this is a series of panels and I have already talked about panels, I am giving the puppetry track its own mention. After listening to episode 71 of the Needless Things Podcast (yes I am not just a writer for the site but a huge fan) I am going to miss all the awesomeness that the puppetry track has to offer. Ive never been to any part of the track but the amount of passion that Beau Brown has for it definitely is evident. There are so many things that sound like so much fun, even if you are not into the art of puppets, there sounds to be like some very entertaining things to attend.

If you are even remotely aware of Dragon Con then you have probably heard of Buckets Of Rum. They exist at the Hyatt and its an obscene amount of alcohol in a small bucket. The Hyatt is also a fantastic place to hang out in the lobby because the bar is there and has no walls to block the view of all the fantastic costumes.

This might sound silly to some because you would think I could be a nerd at home. It's different though. I feel in my normal life if I truly try to be myself, no one understands me. Or I simply am not allowed to act a certain way due to strange looks or the fear of being treated like back in grade school. Dragon Con is a place where I can act a certain way, dress a certain way, and talk a different way. No one will look at me odd or judge me and I will miss that the most. Going to a place to see people love the same things I love is few and far between. Sure there are other conventions but I promise you none of them feel like Dragon Con. People in the recent years have complained about the crowds but I wouldn't want to be surrounded by any other kind of people.

R.T. Ewell (but you can call him Richard if you see him in public) is a nerd and self published author. While also being Needless Thing's resident Lego fanatic & reviewer. His first novella Fat Trapped was released in 2013 introducing the horror world to The Blankenship Family. Some random likes of his are the Batman villain Bane, Jeff Smith's cartoon epic Bone, and the 80's BMX movie RAD.