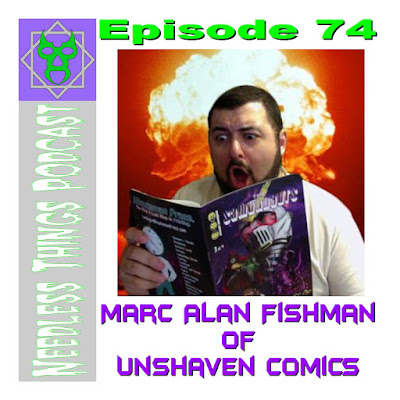 Phantom Troublemaker met the fine fellows of Unshaven Comics at Dragon Con this year and liked 'em so much he had to have them on the Needless Things Podcast!


This week Phantom is joined by Marc – artist, writer, and co-owner of Unshaven Comics and co-creator of the flagship title, The Samurnauts.

Unshaven Comics was forged in a mighty fire of lifelong friendship. What started out as pipe dreams discussed over the junior high school lunch table, has become that which the boys never thought would be; Unshaven Comics has become a legitimate independent publisher of original comic books. Late in 2006, Marc Alan Fishman, Matt Wright, and Kyle Gnepper were commissioned to create an original graphic novel. Knowing that three unknown names would do nothing for the populace in general, the boys decided a unified company name and swanky logo would unite people behind this odd amalgamation of talent. In May of 2008, Unshaven Comics brought it’s first book, The March: Crossing Bridges in America to the world (and convention tables of Chicago). Shortly thereafter, the boys hunger to create grew… thus Unshaven Comics launched into it’s present mission: To make comic books, make friends, and gain a legion of fans. But what’s the deal with the facial hair?

Listen in as Marc and Phantom talk about the history of Unshaven Comics, self-publishing in the modern world, Kickstarter, and even pro wrestling!:

This week's musical selection is “Take On Me” by Atlanta punk rock superstars, The Oswalds!