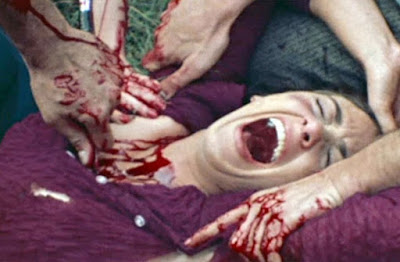 After a brief hiatus, I am back with Devlin's Domain. This week I'm paying tribute to a fallen master of the horror genre. The man who made all your nightmares come true, Wes Craven.

For the entirety of Wes Craven's career as a director he has consistently made some of the highest quality horror films. A lot of those films were so popular that they inspired sequels and remakes. Of course none of those really lived up to the original Craven films.

The most well known of his films is A Nightmare On Elm St. It was the most mainstream film he had made at the time and it capitalized on the success of the slasher genre. This was no ordinary slasher film, however. Freddy Krueger's ability to haunt the dreams of his victims gave a unique kind of freedom to the story. When the line blurs between dream and reality the outcome is unpredictable. Freddy Krueger became a global phenomenon and deserves to be on the Mount Rushmore of horror.

Craven followed that film with a series of awesome, yet less popular films. The Serpent and the Rainbow was a wild film about an American who is exposed to crazy VooDoo nonsense. It's allegedly based on a true story, so there's probably not much truth to it. That doesn't stop it from being a great movie though.

The People Under the Stairs was great as well. A crazy couple keeps people in the walls of their house and tortures them. What's not to like? Damn good performances by Everitt McGill and Wendy Robie, who were hilarious and horrifying. They're the real threat of this film, not the people under the stairs, as the title suggest.

Then there was his most popular modern film series, Scream. Scream held a mirror up to the horror genre and then shattered it. He exposed all the rules of how the genre worked and then proceeded to break them while simultaneously following them. Talk about a meta masterpiece. It's definitely not my favorite series, but his talent shows through. He managed to wrap all four films up into a nice little package with a bow on top.

Before all that there were two films that really pushed the envelope at the time. The Hills Have Eyes was a brutal look at a family stuck in the desert with inbred mutants who bring terror upon them. It's one of my favorite films directed Craven. The remake wasn't too shabby either, but I have a soft spot for the original. My all time favorite Craven film happens to be his very first though.

The Last House On The Left

Making his directorial debut in 1972, he pulled no punches. The film's tagline was: To avoid fainting, keep repeating, "It's only a movie, it's only a movie.". It was slapped with an 'X' rating, but he later got it down to an 'R'. It has been banned in several countries. It was made on a low budget and casted relatively unknown actors.

Our story starts with two teenage girls, Phyllis and Mari, headed to a concert. They try to score some pot from a stranger on the street and end up in the clutches of a group of escaped convicts, Krug, Junior, Weasel and Sadie. 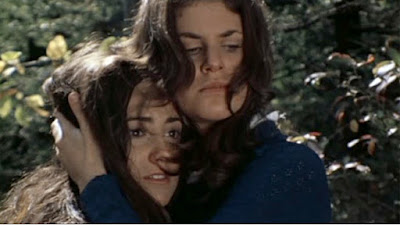 Still on the run from the police, the cons decide to kidnap the girls and hide out in the woods. Here we find out what bored psychopaths do for fun. They toy with the girls and make them urinate on themselves, strip naked and have sex with each other. The girls comply, no matter how humiliating. 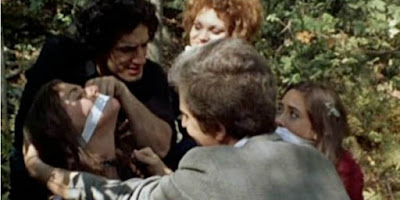 With a courage to survive, Phyllis makes a break for it to try and find help. Krug, Weasel and Sadie pursue her while Mari is left with Junior. Junior is Krug's bumbling, learning deficient little brother. Mari attempts to persuade him to help them and manages to trick him and escape.

These scenes jump back and forth with scenes of the parents in distress and scenes of the dopey cops trying to find the criminals. The police scenes are the only thing I have an issue with. Maybe it was an attempt to give some relief and balance the trauma from the main story. It was just way too campy for me and doesn't fit in at all.

The cons eventually catch up to the girls and proceed to rape, mutilate and kill them. These scenes were excellently done. David Hess knocked it out of the park with his portrayal of Krug. You'd think he'd done this kind of shit before. The rape scene was just disgusting and disturbing. It wasn't even that graphic though. The camera stayed on they're faces most of the time. Afterward you can almost sense a momentary regret by these sadist. 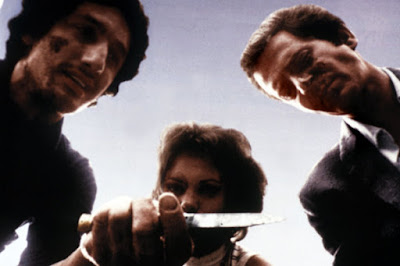 After dealing with the girls the look for a house to stay at for the night and end up at Mari's parent's house , ironically. The parent's figure out that these psychos are responsible for their daughter's death. After the lights go out for the night they make a plan to take revenge and dispose of the vermin in horrific fashion. 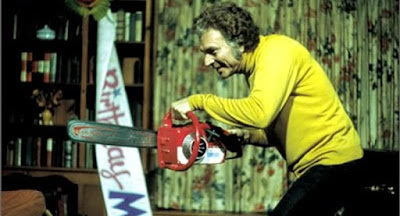 This film is still disturbing today. I can't imagine what a stir it caused when it came out. I wish he could have kept up this level of shock in his future films, but mainstream audiences can't handle some of this stuff. Even the remake of Last House on the Left was child's play compared to the original. IMDB gives it a 6.0, which I think is a load of crap. I'd give it a 8.5, it loses some credit for the stupid cop scenes. Thanks Wes Craven for all your contributions to cinema and our lives.

I'll be back on track next time with MK-Ultra, Hunter S. Thompson and Dimethyltriptamine.


About Me: I have a couple of different aliases, but for this column I will use my middle name. I am Devlin and I currently reside in Atlanta, GA. 32 years of age and still feeling immortal. Former Rockstar, current Pro Wrestler and hell, I'm still a Rockstar at heart. I got my first taste of obscure cinema when I was about 8 years old. My Dad would take us to the video store every weekend to stock up on classic horror films to watch on his projector. They were mostly harmless, PG-rated horror films like the great Universal monster movies. Then one night he rented a movie for himself to watch after we had gone to bed. I was so intrigued by this film that I wasn't allowed to see. I begged and begged and he eventually caved. That night I was exposed to a film unlike anything I had seen before. Ever since that night I wanted to find more films that gave me that same sensation. I wanted to feel shock and disgust. I found my place in the Horror aisle. The film I watched was Faces of Death. Thanks Dad.
Posted by Devlin at 8:10:00 PM