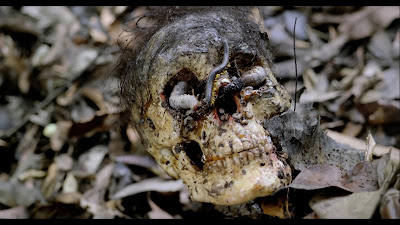 Eli Roth's take on the cannibal movie, The Green Inferno, has finally made it's way to theaters. I haven't had the chance to see it yet, but I have seen my fair share of the cannibal flicks that inspired Roth to make his film. It wasn't very difficult to pick which one to review in Devlin's Domain. I hope you have a strong stomach, cause this is going to get violent. Get your barf bags ready and step into my domain.


Back in the late 70's and early 80's there was an influx of Italian filmmakers dabbling in the cannibal horror subgenre. Some of the films were good and some were downright awful. A few of the more popular ones were The Man From Deep River, Mountain of the Cannibal God, Zombi Holocaust and Cannibal Ferox. Some of these films caused a bit of a stir among horror fans, but there is one cannibal film that is by far the most controversial. Of course this is the film I chose to review today, cause that's how I roll. This film has been protested, banned, criminalized and disowned. It's one of the most notorious films of all time. This is...

I've been reviewing several found footage films recently and many give credit to The Blair Witch Project as being the first of it's kind. Many people are unaware that the style was first born in 1980 by Italian director Ruggero Deodato. Cannibal Holocaust made it easy to suspend disbelief with it's documentary style segments. So easy that it ended up backfiring on those involved.

Shortly after the movie's premiere, the film was seized by Italian authorities and Deodato was arrested. The film featured scenes in which real animals were killed. In combination with the realistic presentation and violent death scenes, viewers were led to believe that the actors themselves were killed on film. The actors had signed an agreement to disappear for a year to sell the realism, but were forced to break the contract in order to get the charges dropped from the director.

With his guides he goes deep into what is known as the green inferno. The indigenous tribes they encounter are far away from any kind of civilization and technology. They follow a trail of clues and finally come across a tribe that has possession of the film canisters belonging to the film crew. 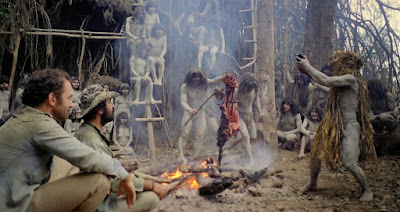 This kicks off the second part of the movie where Monroe returns to the city and views the recovered footage with his colleagues. The first half was good, but the second half is nuts. You get to know the fun loving film crew a bit before they arrive in the jungle. They're intent is to document the culture of the native tribes. Unfortunately for them, not all goes as planned. 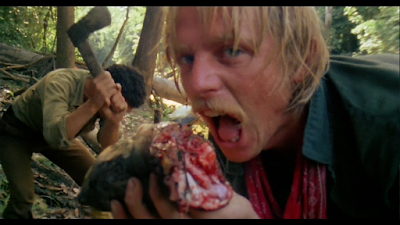 They lose their jungle guide and get lost. They end up having to kill a turtle for food. This is one of the real kills performed for the movie. Supposedly they actually cooked and ate the turtle. The animal killing is definitely one of the most controversial aspects of the film. I can see why people may be upset by it, but they say that every animal that was killed was also used for food. If this is the case, then there shouldn't be such a protest unless it's by vegetarians. If you eat meat then the only problem you should have with it is that the kill was filmed and you're uncomfortable watching real death. It's a touchy subject and ultimately there was probably a better way to get a similar effect than sacrificing an animal. Personally, I wasn't horribly offended by it. 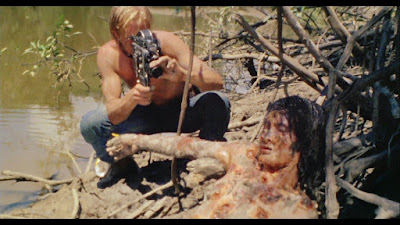 As the movie continues you find that the filmmakers are pretty irresponsible and manipulative. They stage events to make their films more interesting. A whole village falls victim to their shenanigans. The final straw is when some of the tribe members witness the crew raping one of their women. This act seals their fate shortly afterward. 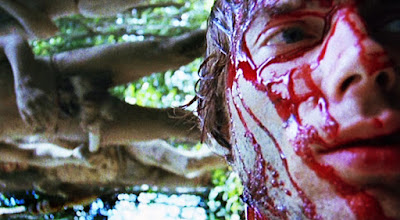 The final moments of the crew's life are insanely brutal. They are raped, beaten, dismembered and eaten. They were totally asking for it too. It's hard to feel bad for them once you see what scumbags they are. These tribal cannibals weren't bloodthirsty savages, as you see in the first part of the film. They were merely protecting their way of life. There's a great line at the end when Monroe is contemplating everything he's witnessed, " I wonder who the real cannibals are?".

Another part of the movie I'd like to point out is the soundtrack. This is one of my favorite scores for a film. I often listen to it when I'm going to sleep. It's pleasant and peaceful, yet haunting at the same time. I'm not sure how it works in the context of the film, but somehow it does and it's perfect. I am grateful that the latest Bluray release comes with the score on CD.

IMDB gives Cannibal Holocaust a pathetic 6.0. I'm probably in a minority that likes this kind of crazy shit, so that probably explains the low score. This really is one of my favorite films ever made. There's plenty of shock cinema out there, but you rarely find anything of this quality. It was a very unique style of film for its time and no doubt inspired all this found footage horror we have today. So far nobody has done it better. I give it a 9.0 on my scale and highly recommend it.

I've got a film lined up for next week that has cults and mind control. So I'll see you back here in Devlin's Domain.

About Me: I have a couple of different aliases, but for this column I will use my middle name. I am Devlin and I currently reside in Atlanta, GA. 32 years of age and still feeling immortal. Former Rockstar, current Pro Wrestler and hell, I'm still a Rockstar at heart. I got my first taste of obscure cinema when I was about 8 years old. My Dad would take us to the video store every weekend to stock up on classic horror films to watch on his projector. They were mostly harmless, PG-rated horror films like the great Universal monster movies. Then one night he rented a movie for himself to watch after we had gone to bed. I was so intrigued by this film that I wasn't allowed to see. I begged and begged and he eventually caved. That night I was exposed to a film unlike anything I had seen before. Ever since that night I wanted to find more films that gave me that same sensation. I wanted to feel shock and disgust. I found my place in the Horror aisle. The film I watched was Faces of Death. Thanks Dad.