I'm back this week with another edition of Devlin's Domain. I'm recommending this one to any H.P. Lovecraft fans out there. I'm going to give a brief lesson on a few topics that are relevant to this week's film. So strap on your foil hats and get ready to get brainwashed and hallucinate extradimensional beings who are coming to tear out your soul.

Many of you may have heard of a little, top-secret, CIA run, government program called MK-Ultra. If not, this information may actually come as a shock. From 1953-1973 the U.S. government participated in illegal experiments in an effort to create a means to control the minds of human beings. They used human test subjects that were subjected to drugs, sensory deprivation, hypnosis, isolation, verbal and sexual abuse, and torture. After the program was terminated, the director of the CIA ordered all documents related to the program be destroyed. Some documents survived and were declassified in 2001. Of course most people didn't notice due to the other thing that happened in 2001. Most information that has been obtained about the program has been mostly from eyewitness testimony. 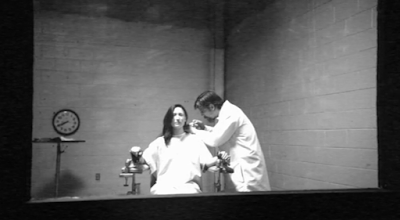 Allegedly, one of the drugs administered to the test subjects was a chemical compound called DMT (dimethyltriptamine). DMT has a pretty interesting history. Tribes in South America have been using it for centuries in a brew they call Ayahuasca. It's a combination of two different plants and without one or the other the brew is ineffective. One plant contains a high amount of the DMT compound. The enzymes in your body break down the drug so it cannot be experienced. So the second plant contains an MAOInhibitor which frees your body to feel the DMT effects. How they figured this out in the forest hundreds of years ago is a mystery. The experience lasts about 15 hours and they say it gives them the ability to astral project. They also say that they communicate with the 'gods' while under the influence.

Modern technology has made it possible to make a concentrated extract of DMT that is typically smoked. This method takes the 15 hour Ayahuasca experience and condenses it into 15 minutes. It is said to be the most intense experience you can ever have, aside from dying. In fact they have said that DMT is the same chemical excreted by the peneal gland in the moments before death. It produces visions of dead relatives and bright lights and colors. People on DMT have also claimed to speak with angels if they're religious and aliens if they're nonreligious. So that tells me all these going to heaven stories are rubbish.

If you're interested in more information about DMT, I suggest looking into the book and film by Rick Strassman called DMT: The Spirit Molecule. There's a reason for all this information I'm laying out. It's because these elements build the plot for:

This film uses a unique blend of documentary footage, found footage and standard filming. We get a short introduction to the MK-Ultra experiments and the use of DMT. A found footage home video plays showing actor Michael McMillian, who you may recognize as the preacher from True Blood, about to take a dose of DMT. It starts as a normal trip until a short wave radio frequency comes through and shit hits the fan. 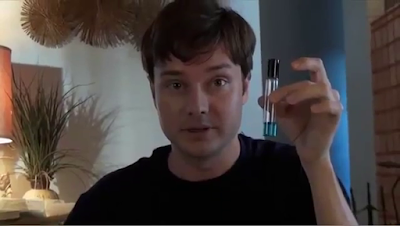 Our main character, a journalist named Anne, is a friend of the guy in the video. She sets out to find out what exactly happened to him. Of course this means she starts to do her own research on DMT and MK-Ultra herself. She comes across another journalist, who is obviously inspired by Hunter S. Thompson. He's no Johnny Depp, but since his name isn't Hunter in the story I can let it slide. 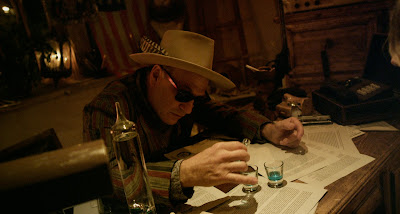 They end up doing the DMT and start seeing all kinds of craziness. It's like they opened a door to another dimension. But it doesn't stop after the drug has worn off. They continue to see these beings and horrible things start happening. Reminds me a lot of From Beyond, a film based on an H.P. Lovecraft story. 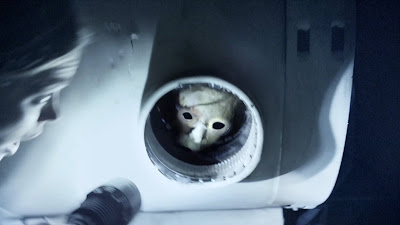 I was satisfied with the performances in the film. I also enjoyed the themes involved. I'm into conspiracy and the idea of what lies beyond our limited perception. My problem with this film is that they try to shove 10 lbs. Of shit into a 5 lbs. bag. There is so much going on that nothing gets enough attention. I liked the use of DMT as a plot device, but the effects are unbelievably exaggerated. It may work for someone who has no idea of what it is, but for the informed it's pretty ridiculous. It's like saying weed turns you into a psychopath.

Overall I enjoyed the movie, but it's a one and done deal. I loved the Lovecraftian theme, the conspiracies, the drugs, the filming style, and the acting. The script, however, is a little too weak to give this another viewing. It's rated 5.5 on IMDB but my personal score is around 6.5. It just fell a little short for me, which is fine because I didn't expect much anyway.

Next week, in preparation for the release of The Green Inferno, we'll journey into the green inferno. The original, totally messed up green inferno. Don't miss it!


About Me: I have a couple of different aliases, but for this column I will use my middle name. I am Devlin and I currently reside in Atlanta, GA. 32 years of age and still feeling immortal. Former Rockstar, current Pro Wrestler and hell, I'm still a Rockstar at heart. I got my first taste of obscure cinema when I was about 8 years old. My Dad would take us to the video store every weekend to stock up on classic horror films to watch on his projector. They were mostly harmless, PG-rated horror films like the great Universal monster movies. Then one night he rented a movie for himself to watch after we had gone to bed. I was so intrigued by this film that I wasn't allowed to see. I begged and begged and he eventually caved. That night I was exposed to a film unlike anything I had seen before. Ever since that night I wanted to find more films that gave me that same sensation. I wanted to feel shock and disgust. I found my place in the Horror aisle. The film I watched was Faces of Death. Thanks Dad.