The Masquerade Part 2 - The Job 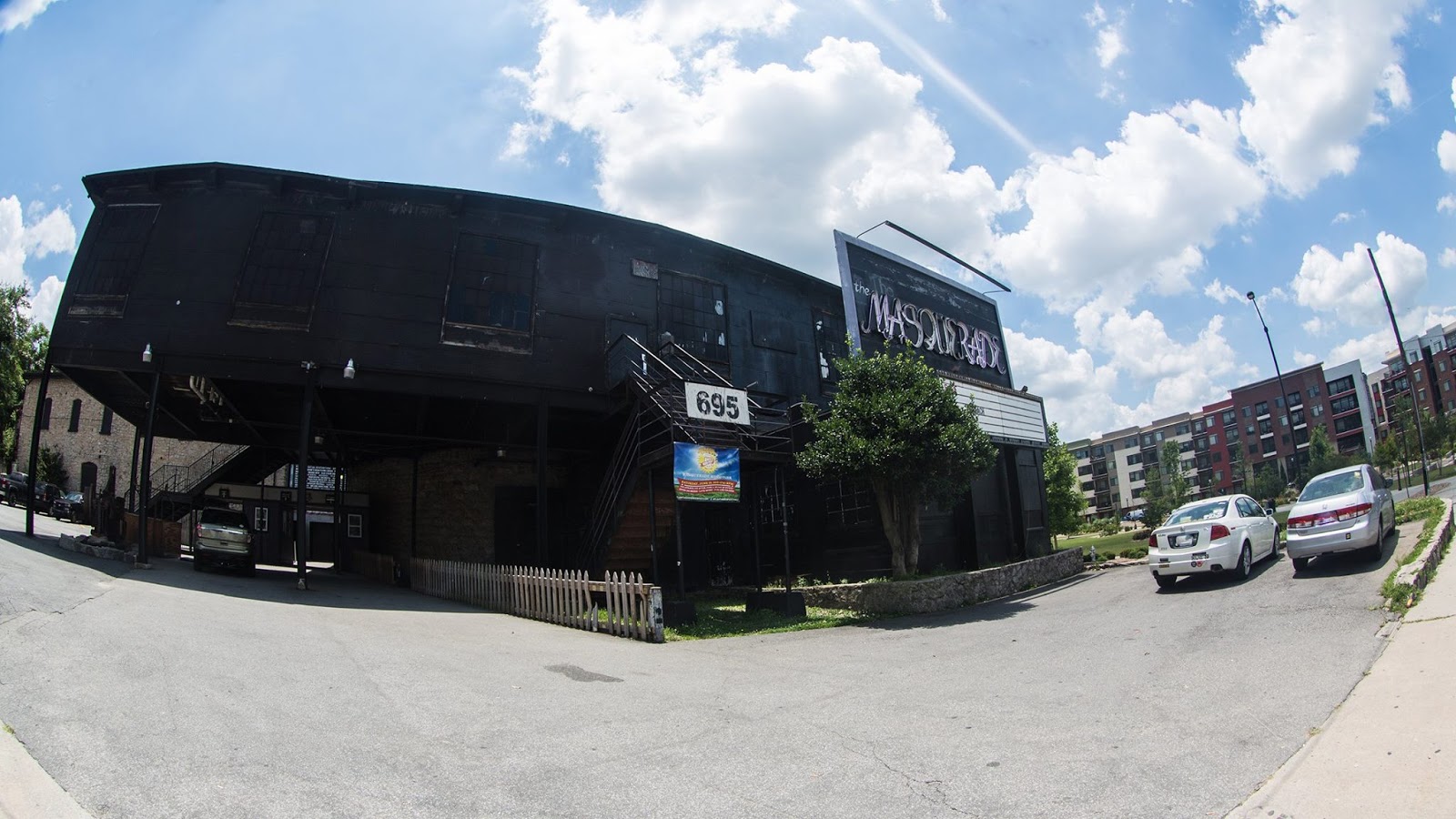 In the first part of this series about my own personal experiences with The Masquerade music venue in Atlanta I talked about my first time there and a few of the memorable experiences that occurred on subsequent visits. Now it’s time to talk about working there – the best job I have ever had.

I had been to the venue a good bit for shows, but it’s not like I was ever truly comfortable there. It was always a slightly foreboding place in the midst of Downtown Atlanta, which is itself a bit ominous. But I had been through several retail and food service jobs and didn’t feel like I could do that anymore. I had no goals or plans whatsoever other than getting away from my parents, and at that point I’m pretty sure they supported that goal more than anything else I had ever pursued.

And suddenly my brain has started working. One of my friends worked there. Not a close friend, but a guy that I liked and had hung out with. He told me to show up at a certain time on a certain day and ask for Barbie.

The name “Barbie” probably carries a lot of weight for anyone reading this that worked at the club. Barbie was the manager while I was there and she had/has quite a reputation. But she was always decent to me. I can remember a couple of times where she lost her shit a little bit and I know I ended up working in the parking lot a few times when I had asked to work inside. And there was one time she accused me of stealing money from the parking lot fares. Mostly she was pleasant to me, though. And she’s the one that hired me, so I’ll always be grateful for that.

I don’t know the exact date I started, but I can narrow it down to sometime between June 22nd and July 19th of 1996. I know this because Anthrax played there on the former date and even though I didn’t love their time with John Bush, there’s no way I would have forgotten them playing at the place I freaking worked. And I know I was working there during the Summer Olympics in Atlanta. That’s actually crazy because apparently nine inch nails played that September. I know I didn’t see that show, so I must have been stuck working the parking lot. I almost have a vague memory of asking to work inside and being told as the new guy I was stuck in the lot (and rightly so).

The hiring process was not exactly thorough. If I remember correctly, the interview consisted of Barbie asking when I was available to work – whenever – and telling me I had to buy a shirt. I think that I had two shirts the whole time I worked there. An ex-girlfriend got one – I’ll talk about her later – and I still have the other. And also only having two shirts while working at that sweaty, smoky, dirty place seems pretty gross to me now.

I need to acknowledge the super-handy Setlist.fm for filling in many of the blanks in my memory and to the amazing Augusta Chronicle for taking care of the rest. As I write more and look at those sites, things are starting to come back. There are certain shows and events that are crystal clear in my memory, but others needed a little jolt. After working there for around a year and seeing/working on/setting up who knows how many shows, things tend to blur a bit.

Before I get into specific experiences, I want to run down just what, exactly, my job was.

For minimum wage - $4.25 an hour – I was hired as security. I can’t remember my actual job title, but quite frankly nobody making minimum wage even deserves a job title. We always just referred to ourselves as “security”. To the public eye our jobs involved walking around the floors of the various parts of the club during open hours and making sure there was no “trouble”. This was called “roaming”. Security also worked the stage and backstage areas. These jobs basically involved keeping the public away from the talent in various ways. I’ll get more into that later.

“Trouble” could be anything from underage drinking to use of illegal drugs to fighting. I have to be honest and say that during the time I worked at The Masquerade I saw very little “trouble”, but I’ll certainly be telling you about the instances I did see or have to deal with. For the most part the place was pretty chill. Every night I went in expecting bad things to happen, and 99 out of 100 nights nothing did.

Roaming was part of the job, but there was so much more to it than just that. As far as duties during hours of operation, we were also responsible for the parking lot and “working the door”. The former involved taking cash from patrons at the entrance to the parking lot that used to be beside the venue – but not providing any sort of protection for their cars, despite what people assumed. In the latter post you would check patron’s IDs and issue wristbands that identified them as old enough to drink.

The parking lot mostly sucked and nobody really wanted to work it. Granted, there were certain perks if one was of odious enough character to take advantage of them, but for the most part you just sat at the front of the lot all night, nowhere near music or partying or any sort of entertainment. Remember – we didn’t have cell phones in 1997. It’s not like we could sit out there looking at Facebook all night.

As I mentioned, most people assumed that we were watching over the cars. We were not. If I hear a window break, no way am I risking my life for some twat upstairs watching Three Doors Down. Sorry about your Discman, Meredith. Here’s how totally not watched the parking lot was – one of the guys at the club was a junkie(!). I was pals with him and had made minor attempts to get him to stop. One night he was jonesing pretty bad. Lots of things went on in that club, but shooting up was pretty strictly verboten – we couldn’t even smoke cigarettes on shift. At the time the area was rougher than it is now and if he had gone out in an alley or something, who knows what would have happened. He asked to use my car, but even I at the height of my naiveté (which I was right around then) was smart enough to not give a junkie my keys. So I went out to the car with him and let him shoot up in there. He was going to do it one way or another, so I figured I might as well give him a safe place and a second – and sober – set of eyes. I didn’t want him to do it, but his life certainly wasn’t going to get any better if he got busted. I watched as he cooked and prepped and whatever, but he asked me not to look as he actually shot up.

I’ve always had a fear of pretty much any drugs other than marijuana. I never even dropped acid or ate mushrooms. But looking back at my buddy that night as he coasted off for sure reinforced the fact that I would never use heroin. Something about his high just freaked me out. He was gone. Loss of presence of mind is the thing that always bothered me about drugs, and that was exactly what I saw in my passenger seat.

After a few minutes he packed his kit back up and we went back inside.

He left town a couple of months later. I think I heard at one point that he had cleaned up. I hope so. I hope that guy is out there somewhere leading a happy life and clean and sober.
I’ve never seen anyone else shoot heroin and I hope I never do. Out of all of the Masquerade memories I have, this one haunts me. I didn’t really expect to share it here, but it’s a thing that happened and – like so many of the events I’ll be talking about – it had a big impact on me as a person.

I think that’s it for today. Next time I’ll talk about working the door and maybe even get into some band stories. Spoiler – some bands are dicks. I’ll tell the story of celebrating my twenty-first birthday at the club at some point, as well.

Thanks for reading. If you have your own Masquerade stories to share, do it in the comments below, join the Needless Things Podcast Facebook Group, or drop me a line at phantomtroublemaker@gmail.com.
Posted by Phantom Troublemaker at 11:00:00 AM

Email ThisBlogThis!Share to TwitterShare to FacebookShare to Pinterest
Labels: Atlanta, life the universe and everything, music, music stories, tales from the troublemaker, The Masquerade