My first experience with this wonderful convention was in 2004.  If I recall, I found out about it because of a fan group for the TV show The Tribe, pointing out to me that actors from the show had been there the year before and would be again that year.  As a supporter of the show and its cast I naturally signed up for the convention.  I didn’t realize I would be signing up for an life experience instead.


With the exception of the two years I was rather big and pregnant, I have been at DragonCon ever since.  As a friend of mine once said, “It’s the one place that I have seen where, for four days, everyone can truly be themselves and not be judged for it.”  If anything, complete strangers can thank them and compliment them for it.  My husband added to this quote by saying this:

“It’s the only place I have ever been where you can see Voldemort hug Optimus Prime…and it’s normal.”

There you have it, bro.

The thing that makes DragonCon stand out for me from any other convention is the utter lack of down time.  You always have something to do and so much variety to choose from that it’s almost nauseating.  Writing, reading, music, acting, dancing, cosplay, special effects classes, science, paranormal, art, comics, movies…and this isn’t even touching on the panels that you sit in on.  These are the activities themselves, and only a handful.  That is what keeps me coming back; the sheer volume of choices.

The best part of all those choices?  I have been to conventions that have their set start times and stop times, then you have to go back to your hotel and that is that.  DragonCon is a multi-day, twenty-four-seven party that never stops and never sleeps.  Half of the choices that I listed take place well after most conventions have shut their doors for the night.  How’s that for the energy drink of conventions? 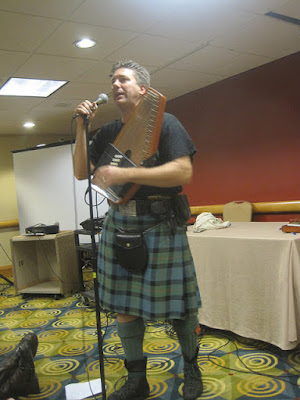 For me and mine, one of our favorite places to haunt has became the Filk Track.  We stumbled upon it last year, curious about the Firefly Drinking Songs.  We’re dedicated Browncoats so it was naturally a draw.  Five minutes into one Instafilk panel and we were hooked.  You pick a fandom, then you pick a popular song, and you Filk it to that fandom in the panel’s allotted time.  Simple as that.  It’s more addictive than you can possibly imagine.  We’ll be spending most of our time at the Filk track this year to be sure.  Would you not want to stay in a room with people that took “Let It Go” from Frozen, mixed Star Trek: The Next Generation, and filked the song “Make It So?”  Come on, you know you want to.

To know me means that you know I’m the perfect real life mixture of Buffy, Piper from Charmed, with a little Sam Winchester from Supernatural thrown in for good measure.  This means I spend my days knee deep in the dirty work.  I’m a martial artist by trade, am a Type A personality, and I don’t have a feministic tendency in me.  So when I discovered the Armory Track, it was like Christmas two months early.  There are panels on silencers and suppressors, ballistics and explosives, and a full armory full of everything from inert explosive devices, detonators, and cannons, to medieval and martial arts weapons.  So…many… feels.  Just remember to look, but don’t touch.  Unless you have VIP access, you aren’t that special.  These aren’t toys; they’re the real thing.  And they make me feel like a kid in a candy store. 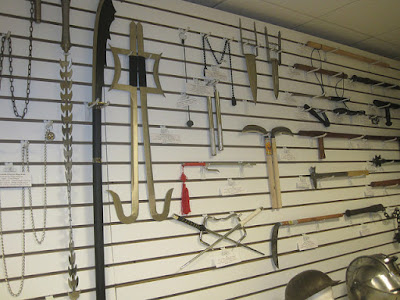 As you might have guessed from the previous paragraph, I’m a workout nut.  When I workout I need my tunes.  I have to have music blaring when I’m sweating it out.  As a result I never come home from DragonCon without a new CD in my pocket.  The music at the Con is not just an experience; it is its own music festival.  I frequent The Cruxshadows and the Bromdignagian Bards.  The first time I heard The Cruxshadows in concert I went to their booth immediately and walked away with over fifty bucks in music.  I was hooked from the get-go.  Then came the wonderful world of Voltaire.  I can thank my husband for exposing me to him.  You have never lived until you have experienced his live show.  Hearing his music is hilarious in and of itself, but the show is even better.  Try getting the Sexy Data Tango out of your head afterwards.  I dare ya.  Experiencing at least one live concert of your choosing at DragonCon should be a requirement.  Or at least something to guilt your friend over if they miss out. 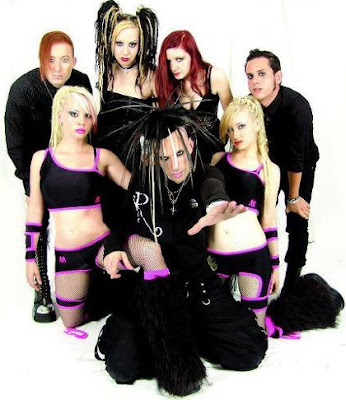 One of the highlights of the Con is one very special place that rests in the Peachtree Centre.  It is the light of my Atlanta extravaganza, the epicenter of my culinary world, the tippy tip top of my foody food chain: 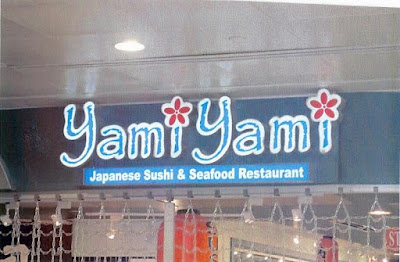 Sushi is my favorite food, people.  If I had the budget for it I would eat it every day and not feel guilty.  Breakfast, lunch, and dinner…you name it and I’ll down it with a side of Wasabi and ginger, baby.  I’m very picky on my sushi; it has to be just right.  If it isn’t great, I won’t waste my time.  Since that lovely place dropped into the Peachtree Centre and into the world of DragonConners everywhere, I have found no one that measures up.  I turn my nose up at all other restaurants and mutter, “Humph!  Don’t think so!  You’re not Yami-Yami!”  They set the bar for me and broke the control so it could never be lowered again.  I make sure to have the money in my budget to eat there at least once on my trip.  It’s an experience, a way of life, a sensation, and ohhhhh I love every minute of it.

My husband exposed me to Mafia/Wolf games.  I had no idea how awesome they could be to play….until I sat at DragonCon with my teen and played “Are You A Death Eater?”  That’s a big draw that I look forward to revisiting again and again.  The Mafia/Wolf games can be organized by track or sometimes just found “underground,”  ran independently by fans.  Find one and run with it.  Everyone is assigned a role and must hide it from the group.  The “bad guys” spend the “night phases” killing off the innocents, while everyone attempts to find each other’s identities and expose them in the “day phases” in an effort to eliminate them.  Some have special abilities that save them or help to reveal other’s true natures, if only to themselves.  But the last one standing wins.  I was a Death Eater last year, and it came down to me and Lord Voldemort….who sold me out and won the day.  Darn it.

Now I give you two glorious words, my friend.  Drum Circle.  I shouldn’t have to say anything more.  The energy of that place is amazing.  A huge circle of dancing lead by bongos, wind instruments, etc.  Everyone trades out when tired, taking turns playing to keep the music going well into the AM hours.  You feel so alive walking in there that you can’t help but walk up to a drummer and offer to take the drums when they want to take a break.  Your inner Rickie Ricardo just screams to come out! 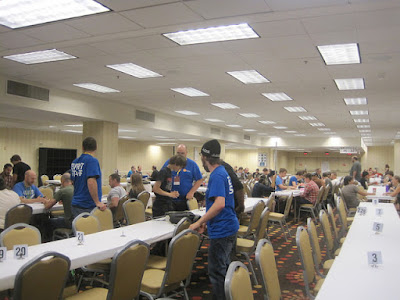 If you read Part One of my Tabletop review then you know my family is all about the gaming.  So the gaming hall below the Hilton is where we head in the evenings to unwind.  Magic Cards, We Didn’t Playtest This, Munchkin…you name it and we’ll bring it.  Sometimes we’ll hop in on the tournaments if we feel froggy.  It’s the place to be when you want to hang with the gaming crowd and get your competition on.  Besides, being gamers is what got my husband and I together in the first place so it is definitely our place of Zen.  Our wedding cake toppers were Cecil and Rosa from Final Fantasy 2, so need I say more?

These are the things that keep me coming back to DragonCon each year.  We pack our bags and coolers, burn our music for the road trip, and hit the Interstate for several days of crazy goodness.  The regular requirement, however?  Our road music must include Bad Company’s “Oh Atlanta,” and must be the first song we play as we hit the Interstate.

It should be law, people.