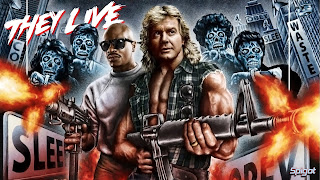 This is a special edition of Devlin's Domain where I will be honoring one of my recently fallen heroes. I had a different review planned for this week, but we'll have to visit the Cuban revolution next time.


A few days ago we lost a phenominal entertainer in 'Rowdy' Roddy Piper. He was an unlikely star in the professional wrestling world. He was a smaller guy in the land of the giants, yet with his charisma and personality became a trailblazer for what is now known as sports entertainment. Not only did he have a slobberknocker of a dog-collar match at the very first Starrcade, but he was in the main event at the very first Wrestlemania. He is arguably the reason that Hulk Hogan is a household name. He was a shining example that against all odds, with talent and hard work, you can carve your place in history. He wasn't the best technical wrestler, but he knew how to entertain and was unpredictable. That's the kind of madness that I always enjoyed. He eventually brought his entertainment value to the movie industry. Most of his films aren't worth bragging about, but there is one that stands above the rest. It's one of my personal favorites.

Made in 1988 and directed by John Carpenter, They Live is a horrifying, uncanny reflection of our world. The horror in this film isn't from the antagonist, it's from humanity's inability to recognize it.

Roddy Piper is our main character. He plays a homeless drifter, cleverly named Nada. Nada takes a construction job and finds refuge with some other homeless people. After witnessing a raid of an underground resistance that operates out of a church, he discovers a crate of sunglasses.

Nada eventually tries on a pair of the sunglasses and reality changes before his eyes. Certain people look like absolute monsters. Signs and billboards turn from colorful advertisements to harsh, black and white demands. 'Marry and Reproduce','Conform', 'Obey', and ' 'Go To Sleep' are a few of those demands. Of course this realization prompts one of the most quotable lines in history, 'I have come here to chew bubblegum and kick ass...and I'm all out of bubblegum'. 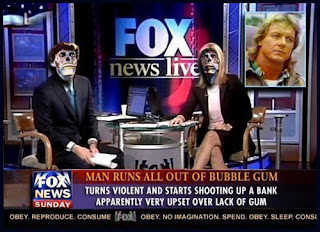 After a completely ridiculous fight scene with his friend, Frank, Nada shows what the sunglasses reveal. I had to honestly scratch my head over this fight scene. Why would you put up a fight over wearing sunglasses. I don't get it. Anyway, Nada acquires a partner to retaliate against these evil, alien forces.

The two eventually encounter a woman named Holly, who they recruit for their cause. She has access to the major media outlets that the aliens are operating. They devise a plan to infiltrate a news studio and expose the aliens to the rest of the population. *Spoiler* Holly ends up being a traitor that works for the aliens, but they end up exposing them anyway. 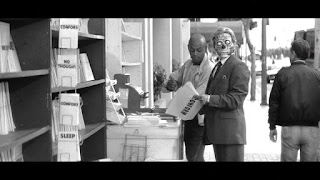 The movie is low budget and far from perfect. What appeals to me about the movie is it's honesty. You can still see the themes from this movie played out in our society. Advertising is ubiquitous no matter where you look. There's a constant need to consume the unnecessary. If you look at the news, they're only delivering bullshit stories that serve as a distraction from any real issues. You can see how easily the masses can be swayed by a single insignificant news story. Flags, lions and ice buckets have taken center stage while more important issues fall by the wayside.

When I saw this movie as a child I remember just being excited to see one of my favorite wrestlers in an alien movie. But as I grew older, all these deeper themes jumped out at me. I've been living my life with the sunglasses on ever since. Fear is the product they push. Fear is the mind killer. Don't obey.

Even though this film isn't the best quality all around, I hold it in high regard. IMDB says 7.3, I say 9.0. I'm a bit biased though. This film will always have a special place with me, and so will Hot Rod. Shine on you crazy bastard.

About Me: I have a couple of different aliases, but for this column I will use my middle name. I am Devlin and I currently reside in Atlanta, GA. 32 years of age and still feeling immortal. Former Rockstar, current Pro Wrestler and hell, I'm still a Rockstar at heart. I got my first taste of obscure cinema when I was about 8 years old. My Dad would take us to the video store every weekend to stock up on classic horror films to watch on his projector. They were mostly harmless, PG-rated horror films like the great Universal monster movies. Then one night he rented a movie for himself to watch after we had gone to bed. I was so intrigued by this film that I wasn't allowed to see. I begged and begged and he eventually caved. That night I was exposed to a film unlike anything I had seen before. Ever since that night I wanted to find more films that gave me that same sensation. I wanted to feel shock and disgust. I found my place in the Horror aisle. The film I watched was Faces of Death. Thanks Dad.
Posted by Devlin at 9:57:00 PM