Devlin's Domain - Juan Of The Dead

We are back on track this week at Devlin's Domain. Had to take a detour last week due to the sudden loss of the late, great 'Rowdy' Roddy Piper. If you missed it, go check out my tribute to Hot Rod with a review of They Live.

Like They Live, this week's selection shares similar themes of revolution. If I'm not mistaken, this is my first taste of Cuban cinema. It's a lot different than I expected. Honestly I didn't expect a whole lot out of this one. Based on the title alone I assumed this was going to be a B-trash zombie flick trying to ride the success of a similarly titled movie. I was pleasantly surprised to find I was mistaken. You've heard of Shaun of the Dead, but have you heard of...

Juan of the Dead

Of course once you hear the title you think Shaun of the Dead, which gives the impression that you're in for a zom-com. That would be the correct assumption, but the comedy in this film is a lot different than the British style. So just because you fancied one doesn't mean you'll like the other.

Our main character, Juan, and his friend Lavaro wake one morning to find Havana has been overrun by zombies. The first injection of politics hits when the media claims that the zombies are actually Americans trying to undermine the Cuban government. It seems that there's the same amount of media spin in Cuba as there is in the good ole U.S. of A. 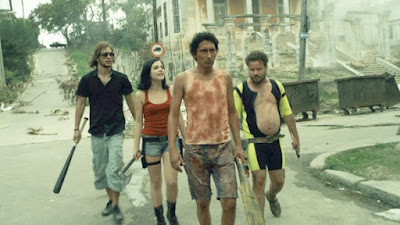 While fighting for survival they group up with a bizarre mix of other survivors. The diversity of the characters is really entertaining. Everyone seems unique and there's bound to be one of them that you can identify with. You have a meathead who is afraid of blood, a flamboyant gay guy, a hard ass chick, and of course the hero Juan.

Juan is a survivor and sees a business oppurtunity amidst the chaos. He starts his own zombie removal business with his friends. When he answers a business call he has one of the best slogans, 'Juan of the Dead, we kill your loved ones'. That's definitely a classic. 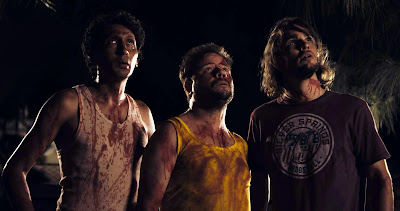 I got a vibe of laziness and selfishness from some of the surviving Cubans. It's like they'd rather just sit by and hope someone else handles the situation instead of defending themselves. This may be due to the communist culture, where they're dependant on the state for everything. Although it doesn't seem like the state is doing much for the people. A zombie run transportation system is referred to as being no different.

There's probably a lot of social and political satire that I'm missing from the film, because I'm not all too familiar with Cuban life. There are a lot of things that I can see reflected in American culture though. We're not all that different. I really like movies like this that can deliver comedy, gore and have some meaning behind it all. 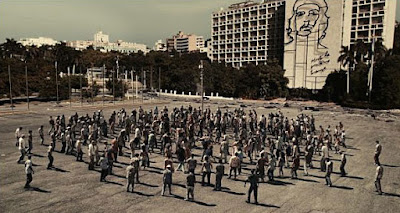 There's plenty of blood spilled throughout the film. I was impressed by the quality of special effects. There were some really well done shots that I didn't expect. They got really creative with the zombie killing so it didn't get repetitive. 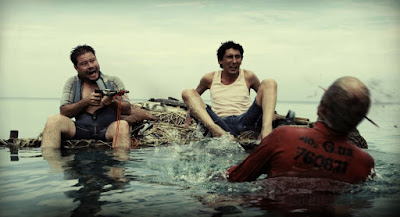 Overall I really enjoyed this movie. It definitely caught me by surprise, but there's something about it that's keeping it lower on the scale for me. I would really like to give it a higher rating based on everything I liked about it. Fact is that I probably won't ever watch it again. It was good while it was on,but lacks any replay value. As much as I liked it, I liked Shaun of the Dead better. I would definitely recommend giving it a watch. IMDB scores it at 6.5 and I am inclined to agree with that rating.

About Me: I have a couple of different aliases, but for this column I will use my middle name. I am Devlin and I currently reside in Atlanta, GA. 32 years of age and still feeling immortal. Former Rockstar, current Pro Wrestler and hell, I'm still a Rockstar at heart. I got my first taste of obscure cinema when I was about 8 years old. My Dad would take us to the video store every weekend to stock up on classic horror films to watch on his projector. They were mostly harmless, PG-rated horror films like the great Universal monster movies. Then one night he rented a movie for himself to watch after we had gone to bed. I was so intrigued by this film that I wasn't allowed to see. I begged and begged and he eventually caved. That night I was exposed to a film unlike anything I had seen before. Ever since that night I wanted to find more films that gave me that same sensation. I wanted to feel shock and disgust. I found my place in the Horror aisle. The film I watched was Faces of Death. Thanks Dad.
Posted by Phantom Troublemaker at 4:00 PM